Back to Godhead > Devotees > How I came to Krishna > What Have I Achieved Since 1971?

What do devotees of Krsna have to show
for their years of devotion? 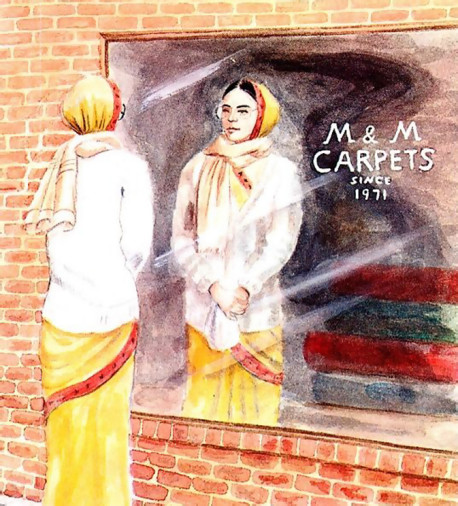 The unrelieved grayness of the sky seemed to cast a pall over everything during a leafless, lifeless, mid-January morning in Moundsville, West Virginia. The town was almost vacant, and I wondered if perhaps today were some holiday I’d forgotten about. Then I noticed a store I had passed many times: “M & M Carpets, Inc.” A large sign above the door read: “Since 1971.”

“1971,” I thought. “That’s just a few years back. What’s that to proudly advertise?” Then I was jolted—it’s sixteen years gone!

Sixteen years. What had I achieved in that time? Messrs. M & M had obviously built a small but viable retail carpet business, something they were proud of. What had I to be proud of?

In one sense the comparison was unfair: my goal differed radically from theirs. My goal was not for an establishment, not for fortune or prestige. My goal was to rid myself of material desires and to thus become qualified to go back to Godhead.

Vedic literatures state that there is nothing superior to the abode of the Supreme Godhead, and that that abode is the ultimate destination. When one attains to it, he never returns to the material world.. . . Every one of us has to go back home, back to Godhead. If we do so immediately and voluntarily, we save time; otherwise we waste time.
The Lord is more anxious to take us back to His kingdom than we can desire. Most of us do not desire at all to go back to Godhead. Only a very few men want to go back to Godhead. But anyone who desires to go back to Godhead, Sri Krsna helps in all respects.
One should be captivated by this information. He should desire to transfer himself to that eternal world and extricate himself from this false reflection of reality.

It so happens that 1971 is the year that Srila Prabhupada initiated me. He explained to me then that to become qualified to go back to Godhead, one must hear about Lord Krsna, chant His holy names and serve Him and His devotees. Although I was a neophyte in spiritual understanding, Srila Prabhupada’s attractive presence and teachings, my husband’s encouragement, and the association of other devotees had given me faith to set out on the spiritual path. My husband and I were with Srila Prabhupada in India at the time, and I saw that the villagers there made no great endeavor for economic development. They were satisfied with whatever they had. Often even the street sweepers were devotees, and in the evening, after their work and a bath, they would sit down to chant the names of God and worship the Deity. Happiness, I began to understand, was in self-realization, not in self-aggrandizement. What was the use in being unnecessarily ambitious?

This concept was confirmed in Srila Prabhupada’s books. For example, when Kuvera, the treasurer of the demigods, offered the devotee Dhruva Maharaja untold riches, Dhruva said, “Please bless me that I may have unflinching faith in the lotus feet of Krsna.” And when Lord Nrsirhhadeva, Lord Krsna’s incarnation as half man, half lion, offered Prahlada Maharaja whatever boon he wanted, Prahlada said, “What should I ask from You? My father was a great materialist, so great that the demigods feared his anger. Yet You have finished him in one second. What then is the value of material power and opulence? Please engage me in the service of Your servants. That is all I want”.

As this knowledge and this mood of surrender gradually strengthened my spiritual ambitions, my material ambitions waned. I accepted that—from a material view—even after a lifetime of spiritual activity (what to speak of sixteen years) one may not have much to show for it. There were examples in the Vedic tradition of devotees who were rich both spiritually and materially, but there were also examples of advanced devotees who had (and wanted) nothing more than a tree to live under and some cloth to wear. If Lord Krsna chose to bestow wealth upon a devotee, the devotee accepted it as the Lord’s spiritual gift, and if the Lord chose not to, the devotee accepted that also.

It became clear to me that assets and accomplishments not used in Krsna’s service are of no enduring benefit. In fact, for the beginning transcendentalist, material possessions and qualifications are distractions from spiritual life: “Your Lordship can easily be approached, but only by those who are materially exhausted. One who is on the path of material progress, trying to improve himself with respectable parentage, great opulence, high education, and bodily beauty, cannot approach You with sincere feeling” (Bhag. 1.8.26).

But now, in 1987, I didn’t feel fully qualified to go back to Godhead. Had I wasted my time? Was I simply a two-time loser, with no position in either the material sphere or the spiritual? No. In the words of Lord Krsna “In this endeavor there is no loss or diminution, and a little advancement on this path can protect one from the most dangerous type of fear…. A transcendentalist engaged in auspicious activities does not meet with destruction either in this world or in the spiritual world; one who does good is never overcome by evil” (Bg 2.40, 6.40).

This is not merely consolation for those who don’t make the grade; it’s transcendental truth. One in devotional service has a spiritual account with accruing assets that can never be diminished. Srila Prabhupada writes, “One percent done in Krsna consciousness bears permanent results, so that the next beginning is from the point of two percent…. I didn’t know what percentage I was up to, but whatever it was, it was mine eternally and it was gradually propelling me back to Godhead.

As it turned out, that January day wasn’t a holiday. The bleakness and cold had kept people home. I did my errand for the devotees and considered that since I was initiated into spiritual life in 1971, in many ways my life had begun then. I was “since 1971.” And one day I would have a lot to show for it.

One Response to What Have I Achieved Since 1971?