Back to Godhead > Devotees > Preaching > Vegetarianism > Vegetarian Cuisine and Continence

A vegetarian diet provides an often overlooked
benefit for those on the spiritual path. 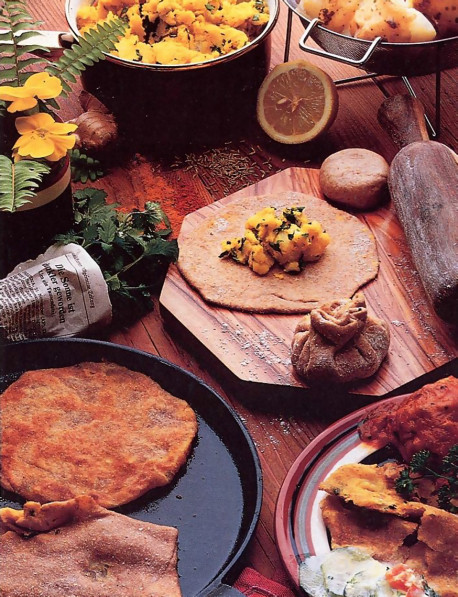 In the course of my reading I recently learned how a vegetarian diet is closely related to continence.

“Men’s interest in sex . . . may be reduced or in some cases eliminated by a totally vegetarian diet…. Because animal protein promotes a higher production of sexual secretions, large amounts of meat daily could lead to a need for more frequent orgasmic release,” reports East West Magazine.

On further study I learned that this concept is not new in the West. Pythagoras, the famous Greek mathematician and philosopher, believed that a strict vegetarian diet was necessary to make continence easy and habitual. His followers (the Pythagoreans) married and had children, but also practiced continence in the same way that married Hare Krsna devotees do, refraining from sex except for procreation.

Dr. Raymond Bernard writes, “From Pythagoras, Plato and Aristotle learned the doctrines of vegetarianism and continence, to which they both adhered throughout their long lives; and Aristotle taught these doctrines to his pupil Alexander the Great, who was a strict vegetarian….”

Of course, the prospect of continence may make a vegetarian diet unattractive to many. Indeed, Freudian philosophy has so influenced modern thinking that continence is considered a health danger the cause of nervous and mental disorders—and is scorned as a product of masochism and religious superstition. Writers Aldous Huxley and John Updike judged chastity a “sexual perversion,” and Updike banned it from his novels. East West Magazine acquiesces: “If after six or eight months on a mostly vegetarian diet, sexual desire has not returned, it may be wise to increase the intake of animal protein….”

However, besides Pythagoras and the Pythagoreans, some of the greatest geniuses in history practiced continence and experienced its physical, mental, and moral benefits. Among them were Newton, da Vinci, Tolstoy, Michelangelo, Raphael, Handel, Beethoven, St. Francis, Locke, Spinoza, Kant, and Gandhi.

Continence is especially important in spiritual life. Srila Prabhupada, the founder and spiritual master of the Hare Krsna movement, explains, “The highest pleasure in terms of matter is sex pleasure. The whole world is moving under its spell, and a materialist cannot work at all without this motivation. But a person engaged in Krsna consciousness can work with greater vigor without sex pleasure, which he avoids. That is the test in spiritual realization. Spiritual realization and sex pleasure go ill together. A Krsna conscious person is not attracted to any kind of sense pleasure, due to his being a liberated soul.”

One intent on spiritual advancement, therefore, should embrace a vegetarian diet and welcome the resultant subsiding of passions. In fact, one of the reasons continence has been deemed unnatural and repressive is because nonvegetarian foods tend to arouse passions to an unnatural degree. In other words, for one who is accustomed to the artificial stimulation of a nonvegetarian diet, to practice continence may appear repressive. “Of all members of the mammalian family,” Dr. Bernard writes, “civilized man alone is a victim of an exaggerated and morbid sexual urge, a condition which he has inflicted, to a certain extent, on the animals which he has domesticated and which have adopted his diet….” Dr. Bernard reports that when apes are fed meats instead of their customary fruit, they become licentious and vicious.

Havelock Ellis, author of Studies in the Psychology of Sex, confirms that the sex life of civilized man is unnaturally excessive due to certain aphrodisiacal stimuli rather than to instinct; among such stimuli are tobacco, alcohol, and coffee, sexually stimulating literature, motion pictures, and conversation, and, of course, a high-protein, nonvegetarian diet.

Dr. John Harvey Kellogg, another believer in the physiological value of continence, writes, “Flesh, condiments, eggs, tea, coffee, chocolate, and all other stimulants have a powerful influence directly upon the blood; and through nervous sympathy with the brain, the passions are aroused…. When children are raised on such articles … what wonder that they occasionally turn out bad? How many mothers, while teaching their children the principles of virtue in the nursery, unwittingly stimulate passions at the dinner table until vice becomes a physical necessity? … Nothing tends so powerfully to keep the passions in abeyance as a simple diet….”

This facilitating of continence may be an overlooked benefit of the vegetarian diet—but it is a major one, even from a material viewpoint. Srila Prabhupada writes, “Everyone should be taught not to discharge semen unnecessarily. This is very important for all human beings. If semen is not discharged unnecessarily, one becomes extremely strong in memory, determination, activity, and the vitality of one’s bodily energy.”

1. To make the dough, combine the flour and ½ teaspoon of salt in a large bowl. Slowly add water, gathering the flour together as you do so, until a soft dough is formed. Transfer the dough to a work surface and knead it for 6 to 8 minutes until it is smooth and firm. Sprinkle the ball of dough with water, cover it with a damp cloth, and set it aside.

2. Boil the potatoes until soft, rinse under cold water, peel, and mash coarse. Heat a tablespoon of ghee in a medium-size saucepan, put in the cumin seeds, and stirfry. A few seconds later, add the grated ginger, cayenne pepper, and turmeric. Stir-fry a few seconds more. Add the mashed potatoes and fry for 4 to 5 minutes, stirring all the time. Pour the lemon juice over the mixture, sprinkle in ½ teaspoon of salt, and mix thoroughly. Spread on a plate to cool.

3. When the filling has cooled, form the dough into 12 balls and roll one out into a 6-inch disk. Brush some ghee over the surface of the disk. Place a tablespoon of filling in the center. Lift the edges of the dough over the filling and twist them together. Pull off the excess dough and seal the opening by pinching it firmly. Now dust with flour, flatten into a patty, and roll out as thin as possible, being careful that the filling does not break through.

4. Grease a heavy-bottomed frying pan or griddle with ghee. Fry the paratha slowly, turning it over as many times as it takes to cook both sides. When both sides are goldenbrown with reddish spots, it is done. Remove from the pan and brush one side with melted butter. Repeat the procedure to make 12 parathas. Offer to Krsna.

2. Form the mixture into 8 patties about 1 inch thick. Then heat a heavy-bottomed frying pan over a low flame and put in a little butter or ghee. Put in several patties at a time, leaving enough room between them to insert a spatula. Cook each side for 12 to 15 minutes. When one side becomes golden-brown, work the spatula under the patty, without breaking the crust, and turn it over. If the patties are cooking too quickly, lower the heat. Offer to krsna

1. In a large bowl, mix together the chickpea flour, white flour, cumin seeds, asafetida, turmeric, salt, and pepper. Slowly add the cold water, stirring as you do, until you have a thick pancake batter. If the batter seems too thick, remember that the juice from the tomatoes will thin it. Now stir in the grated ginger and pieces of tomato and bell pepper. Set aside.

2. Melt a tablespoon of butter in a 10- to 12inch frying pan over a medium flame. Pour in enough batter to make two 4- to 5-inch pancakes at a time. It is important that the pancakes be uniformly thick; they need not be perfectly round. Cook slowly on both sides so that they become golden-brown and crisp (about 4 to 5 minutes). Finish the batter in this way, putting more butter in the pan if necessary. Sprinkle the lemon juice over the top of the pudlas. Offer to Krsna hot.

1. Boil the soaked chickpeas in water until tender. Then set them aside to drain. Place a medium-size saucepan over a medium flame and heat the tablespoon of ghee. When it is hot, toss in the cumin seeds, minced chilies, grated ginger, ground coriander, and turmeric, in that order and in quick succession. Stir-fry for about 30 seconds; then drop in the eggplant cubes and turn them with a spoon until they are browned.

2. Now add the tomatoes and spinach. Stir to blend the spices into the vegetables. Pour in the water and add the salt. Lower the flame to medium low and simmer with the pot covered. After 10 minutes, remove the cover and fold in the chickpeas. Then dot with butter and simmer gently, stirring every few minutes, until most of the excess liquid has been cooked off. Offer to Krsna hot.