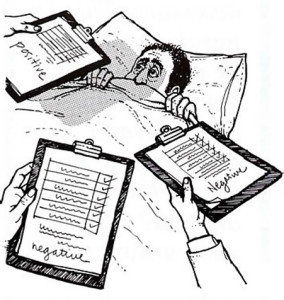 Nancy Wexler is a forty-one-year old neuropsychologist who, having witnessed her mother’s agonizing battle with fatal Huntington’s disease, now faces a fifty percent chance of dying in the same wretched way. She is also one of the developers of a test for detecting the incurable disease. Wexler used to think she would want to know if she herself would fall victim, but now she’s not so sure. She notes, “Before the test you can always say, ‘Well, it can’t happen to me.’ After the test, if it’s positive, you can’t say that anymore.” If the test is positive, you face certain dementia and death. Yet look at the irony. Even if you test positive, who’s to say you’ll live long enough to die from Huntington’s disease? You—or I or Ms. Wexler—could die tomorrow.

And if the test is negative, is this a guarantee against suffering and death? There are thousands of varieties of disease, none of them pleasant, that still threaten to strike. All it takes is one blow, or one virus, to finish this fragile body.

Every living body is potentially and inevitably a dead body. Death means that the body has reached such a degenerated condition that the soul is no longer able to remain. How you come to this point is irrelevant, but one way or another, all of us are going to die.

We are living under a death sentence. If the doctor were to tell you, “You have just six months to live,” how would you change your life? Would you buy a new home? Look for a better-paying job? Probably not. You’d probably focus on understanding the meaning and purpose of your existence. Since we all have the limitation that we don’t know how much time we have remaining, we should consider, even in our healthiest moments, that death may be just ahead.

How to face death? The ideal attitude was shown by Maharaja Pariksit, a great saintly monarch. The Srimad-Bhagavatam relates how Maharaja Pariksit, although emperor of the world, was unfairly cursed to die by a young brahmana boy. Maharaja Pariksit accepted the curse as the will of the Lord and took advantage of his final seven days to renounce his worldly opulence and hear of the glorious Supreme Lord.

Observing strict vows of fasting and renunciation, Maharaja Pariksit left his throne and went alone to the bank of the sacred Ganges, where he met the great sage Sukadeva Gosvami. Many other sages also assembled to hear the exalted exchange between the emperor and his guru, as Maharaja Pariksit inquired on behalf of all people about the nature of the material and spiritual worlds, the position of the living entities, the power of devotional service, and, most important, the activities of the Supreme Personality of Godhead. The Srimad-Bhagavatam centers on this exchange between Sukadeva Gosvami and Maharaja Pariksit, as the king exemplifies the prime duty of a person facing death.

He expressed himself to all the sages assembled (Bhagavatam 1.19.15):

O brahmanas just accept me as a completely surrendered soul, and let mother Ganges, the representative of the Lord, also accept me in that way, for I have already taken the lotus feet of the Lord into my heart. Let the snake-bird—or whatever magical thing the brahmana created—bite me at once. I only desire that you all continue singing the deeds of Lord Visnu.

Srila Prabhupada comments on this verse:

As soon as one is given up completely unto the lotus feet of the Supreme Lord, he is not at all afraid of death. The atmosphere created by the presence of great devotees of the Lord on the bank of the Ganges and Maharaja Pariksit’s complete acceptance of the Lord’s feet were sufficient guarantee to the king for going back to Godhead. He thus became absolutely free from all fear of death.

Death signals the end of this particular body and all its involvements in the material world, but not the end of the soul. The soul is an eternal spiritual person with a full existence beyond this temporary world. To attain that original identity, we must awaken the love for God that is always present in our hearts—although it’s covered now by illusion. Through patient and submissive service to Krsna, we can rekindle that sublime love.

The most important forms of service are hearing and chanting the holy name of the Supreme Lord, Krsna, and absorbing our minds in His pastimes and attributes. Gradually our natural taste for hearing and speaking about Lord Krsna will grow, and this taste will pull us from the illusions created by the material mind and body.

The good news for some is that they can now know for certain that they won’t die from Huntington’s disease. Yet, as Nancy Wexler says, “I wonder if I would really be that much happier if I knew I wouldn’t get the disease.” Who can be happy knowing that death—in whatever form—looms in the future? Only that pure soul who has embraced the lotus feet of Lord Krsna as his sole shelter can face the final moments with true peace and certitude. 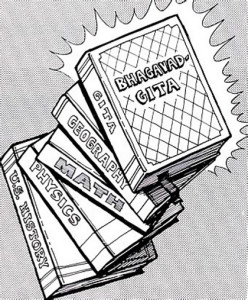 An official publication from the Indian government’s Ministry of Human Resource Development informs us that the new “National Policy on Education” is geared not only for the “material” but also for the “spiritual” development of the citizens. That’s an improvement: India’s educational policy-makers now recognize the need for spiritual development. Without Krsna consciousness, however, that need will remain unsatisfied.

Underlying the many problems now facing India’s educational planners is the prevalent mistake of accepting the self to be the temporary body and of considering the material world to be all in all. Modern education, therefore, does not teach any goal in life beyond ephemeral, materialistic goals. The new National Policy on Education may claim to be fully comprehensive from the “womb to the tomb,” but without educating people about the self before the womb and beyond the tomb, education remains materialistic, and “spiritual” development remains but an empty political premise.

Spiritual development must refer to that which is beneficial for the spiritual self, the soul. The Vedanta-sutra, the Srimad-Bhagavatam, and many other Vedic texts teach that human life is especially for spiritual inquiry and development. And the Hitopadesa says that one who is busy only with eating, sleeping, mating, and defending—without spiritual development—is no better than an animal. Spiritual development, therefore, is the most essential part of a complete education. It provides a direction and a goal for the eternal soul—a definite destination for the self beyond the “tomb.” To provide this missing essence, is the greatest need in modern Indian education, and educational policy-makers would do well to consider the fundamental principles of education that have been presented in the Vedic literatures and elucidated in the writings of His Divine Grace A.C. Bhaktivedanta Swami Prabhupada, founder-acarya of the International Society for Krishna Consciousness.

The Krsna conscious approach to education does not mean that material education and development should be abandoned. Rather, in India’s ancient Vedic scriptures, spiritual and vocational (material) development complement one another. The Vedic literature outlines a program of vocational training that, if implemented, could lead to much gainful employment for the mass of people and could also improve the overall management of human resources. This could also eliminate much unnecessary competition in the job market. And since it stresses balanced simple living, instead of consumerism, it will help curb the depletion of our natural resources. In other words, when human life is turned toward cultivating a destination for the eternal soul, sense gratificatory diversions and material possessions take on a new perspective. This is the God conscious, theistic world view: The world is God’s property, and we (God’s servants) should use it in God’s service.

An atheistic world view—”I am this body; this world is for my enjoyment”—has led to much unnecessary endeavor for materialistic and hedonistic goals, which in turn has brought about a lot of suffering and but a little pleasure. For example, one effect of this world view on education is that students believe they must go all out for pleasure. Consequently, drug and alcohol abuse is high among students in Bombay, New Delhi, Bangalore, and elsewhere.

Students should learn the Upanisadic principle taught in the Isopanisad: “Everything animate and inanimate that is within the universe is controlled and owned by the Lord. One should therefore accept only those things necessary for himself, which are set aside as his quota, and one should not accept other things, knowing well to whom they belong.” This education would go a long way toward eliminating the above anomalies.

A Krsna conscious education puts the most essential knowledge first:

“Humility; pridelessness; nonviolence; tolerance; simplicity; approaching a bona fide spiritual master; cleanliness; steadiness; self-control; renunciation of the objects of sense gratification; absence of false ego; the perception of the evil of birth, death, old age, and disease; detachment; freedom from entanglement with children, wife, home, and the rest; evenmindedness amid pleasant and unpleasant events; constant and unalloyed devotion to Me; aspiring to live in a solitary place; detachment from the general mass of people; accepting the importance of self-realization; and philosophical search for the Absolute Truth—all these I declare to be knowledge, and besides this whatever there may be is ignorance” (Bg. 13.8-12).

If this knowledge could be imparted on a mass scale in India, material, spiritual, and moral instruction would follow, and the myriad problems facing India’s educational policy-makers would come under control.

A popping seventy-two percent of the American people rate their chances of going to heaven as “good to excellent.” That’s about 150 million people. The figure is based on a poll by USA Today.

“This can’t be,” I thought. “That would mean seventy-two percent of the people were practically saints. If this is a nation with that many saints, who are the people indulging in tobacco and alcohol, abusing drugs and having illicit sex? And who’s responsible for the 1.5 million abortions per year and for making herpes and AIDS the twentieth century’s bubonic plague? Who patronizes the gambling meccas and supports the merciless animal slaughter industry by consuming billions of Chicken McNuggets, hamburgers, steaks, and so on each year? Who’s doing all the murdering, mugging, raping, lying, cheating, and stealing?”

Please don’t misunderstand me. I’m all in favor of as many people as possible going back to Godhead. At the same time I can’t help but distinguish between the poll’s results and my experience. I certainly can’t accept that all those sinful activities are conducted and supported by that twenty-eight percent whose chances of going to heaven rate less than good.

I showed the article to a friend and asked him what he thought. “I guess this is what advocates of human potential mean when they talk about ‘incurable optimism'” he replied.

“Optimism I can understand,” I said, “but this is about as realistic as missing all your classes and expecting to graduate with honors.”

“But then some of them may argue that you’re seeing things in terms of your values [Krsna consciousness] rather than their values [Christianity].”

“Even so,” I said, “if people are serious about going to the spiritual world, whether they follow the Bible or the Bhagavad-gita, they should live by their scripture.

“Yes, of course. Otherwise there is no meaning to religion.”

“Then I think it’s fair to say that both the biblical and the Vedic traditions advocate detachment from the world and attachment and love for God as basic and essential for entering the spiritual world.”

“So by those standards,” he said, “I doubt that even twenty-eight percent would qualify, what to speak of seventy-two.”

“That’s right. Other than the incredible power of positive thinking, I can’t fathom any basis for their optimism.”