Back to Godhead > Society > Philosophy > Without Him Nothing can Exist

Without Him Nothing can Exist

The most authoritative opinion on an age-old controversy.

A lecture in Vrndavana on August 13, 1974
by His Divine Grace
A.C. Bhaktivedanta Swami Prabhupada
Founder-Acarya of the International Society for Krishna Consciousness 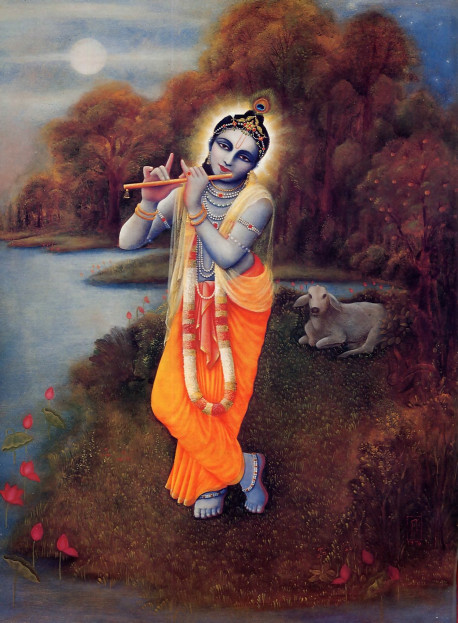 In the Bhagavad-gita Krsna states that He is the Supreme Absolute Truth, in no way subordinate to any “higher reality.” Great spiritual teachers throughout history have accepted Krsna’s words and have substantiated them with numerous references from the Vedic literature.

“O conqueror of wealth, there is no truth superior to Me. Everything rests upon Me, as pearls are strung on a thread.” (Bhagavad-gita 7.7)

The Absolute Truth is the Supreme Personality of Godhead, Bhagavan. And the conclusion of the Srimad-Bhagavatam is that Lord Krsna is Bhagavan: krsnas tu bhagavan svayam. The Rg-veda confirms this: tad visnoh paramam padam. “Visnu is the Supreme.” And sada pasyanti surayah: “The demigods, or those advanced in spiritual knowledge, always look toward the lotus feet of Visnu.”

But the demons do not know that Visnu is the Supreme Personality of Godhead, the Absolute Truth. Because they have an atheistic attitude, they cannot understand that the Absolute Truth is the Supreme Person. Na te viduh svartha-gatim hi visnum … uru-damni baddhah. The atheists are so conditioned by the laws of nature that they cannot understand that Lord Visnu is actually the goal of life. Suppose your hands and legs are tied up. Then you cannot do anything independently. Similarly, we are so tightly tied up by the stringent laws of nature that we are not at all independent and are covered by ignorance. But we are trying to adjust things in this material world so we can be happy. This is not possible. Therefore, the sastras [scriptures] say, we do not know the real aim of our life. Everyone is selfinterested. But we do not actually know what our self-interest is. Our real selfinterest is to understand Lord Visnu: tad visnoh paramam padam. That is our life’s aim.

Visnu and Krsna are the same, but there is a controversy as to whether Visnu is secondary or Krsna is secondary. According to sastra, neither is secondary. Visnu is simply an expansion of Krsna. They are not different personalities. As said in the Brahma-samhita, advaitam acyutam anadim ananta-rupam. Govinda, or Krsna, has ananta-rupam, unlimited forms.

From one candle you can light another candle, then a second candle, then a third. And while no candle is less powerful than the others, there is still an original candle. Similarly, Visnu, Rama, Nrsimha, Balarama—all are expansions of the Supreme Person, Krsna, and They are all as powerful as He. But Krsna is still the original, the Supreme Personality of Godhead. Krsna therefore says here, mattah parataram nanyat—“There is no authority superior to Me.” This is the conclusion of the sastra.

In another place in the Bhagavad-gita [10.2], Krsna says, aham adir hi devanam: “I am the origin of all the demigods.” The principal demigods are Brahma and Siva. They are guna-avataras; they create and destroy this material world.

So, Krsna is the origin of all incarnations of God. Isvarah paramah krsnah. The word isvara means “powerful controller.” The demigods are isvaras; you are also an isvara; I am also an isvara. Anyone who has a little control over something can be called an isvara. That is the dictionary meaning. But even the topmost isvaras in this universe—namely Brahma, Visnu, and Siva—are not the supreme isvara. The supreme isvara is Krsna. That is the sastric conclusion. And Krsna Himself confirms this here: mattah parataram nanyat. “Nothing is superior to Me.” Arjuna understood this conclusion, and therefore in the Bhagavad-gita [10.13-14] he said to Krsna,

And that is the correct conclusion. Krsna’s claim that He is the Absolute Truth is supported not only by the Vedas and the demigods, headed by Lord Brahma, and by authorities like Vyasadeva, Asita, Devala, Narada, and Arjuna, but even by Sankaracarya, although he was the leading impersonalist. He admits, sa bhagavan svayam krsnah: “Krsna is the Supreme Personality of Godhead.” And narayanah paro ‘vyaktat. “Narayana [Krsna] is not a person of this created, material world.”

Since all authorities declare Krsna to be the Supreme Personality of Godhead, there is no doubt about it. And here Krsna personally confirms, mattah parataram nanyat: “There is no being superior to Me.” Where is the difficulty in understanding what God is? There is no difficulty. But if we are obstinate, if we do not want to understand what God is, that is a different thing.

Now, here Krsna also says, mayi sarvam idam: “Everything is in Me.” It has already been explained in this chapter that Krsna has two energies—the material energy and the spiritual energy. They are like heat and light, the energies of a fire. So. Krsna is enjoying His spiritual, blissful life with His spiritual energy. He is completely spiritual, possessing a body of eternal knowledge and bliss (sac-cid-ananda-vigraha). He is anandamayo ‘bhyasat, full of spiritual bliss. He is in the spiritual world, Goloka Vrndavana, enjoying ananda, spiritual bliss, with His eternal associates—the gopis; the cowherd boys; His mother, Yasoda; His father, Nanda Maharaja; and so on. This is confirmed in the Brahma-samhita, goloka eva nivasaty akhilatma-bhutah: “Krsna is in Goloka, but He is also present everywhere.” As Krsna says in the Bhagavad-gita, ekamsena sthito jagat “With but a particle of Myself I support this universe.” And in the Brahma-samhita, andantara-stha-paramanu-cayantara-stham: “He is within every atom in the universe.” He is also within your heart: isvarah sarva-bhutanam hrd-dese ‘rjuna tisthati. In one word, without Him, nothing can exist.

Therefore here Krsna says, mayi sarvam idam: “Everything is existing in Me.” The spiritual and the material energies are working in the material world. And since these two energies are emanating from Krsna, everything is resting on Him. In another place Krsna says, maya tatam idam sarvam: “I am expanded everywhere.” He is expanded by His energy, just as a lamp is expanded by its light. When the illumination of the lamp is stopped, the expansion also stops.

On the small scale, the whole construction of our body is dependent on the jivatma. The jivatma is so small-one ten thousandth part of the tip of a hair. Because that small particle is within this body, the body is so beautiful, it is working nicely, its brain is working—everything is going on.

Now, I am a very, very minute particle, but Krsna is the supreme whole. So, as I am controlling this body, Krsna is controlling the whole universe. Where is the difficulty in understanding? There is no difficulty.

But we’ll not understand. That is the difficulty. Here Krsna clearly says, mayi sarvam idam protam sutre mani-gana iva: “Everything rests upon Me, as pearls are strung on a thread.” And in another place [Bg. 9.4] He says, mayi tatam idam sarvam: “By Me this whole universe is pervaded.” How? That has already been explained: by His two energies, the spiritual energy and the material energy. These are expanded all over the creation. So, where is the difficulty in understanding that everything we see is simply Krsna’s energy?

Those who are devotees, Vaisnavas, they can understand that everything is Krsna’s energy. All of us living entities are part and parcel of Krsna. So, the combination of the living entities and matter makes up the whole creation. As Krsna says here, sutre mani-gana iva: “Everything rests on Me, as pearls are strung on a thread.” The pearls are dazzling, but they’re all resting on the thread. Similarly, everything is resting on Krsna. Krsna is the support.

So, the scientists may discover so many laws of nature, but they do not know that the original support of everything is Krsna. That is the Vedic conclusion. Thank you. Hare Krsna.