Back to Godhead > Who is Srila Prabhupada?

Who is Srila Prabhupada? 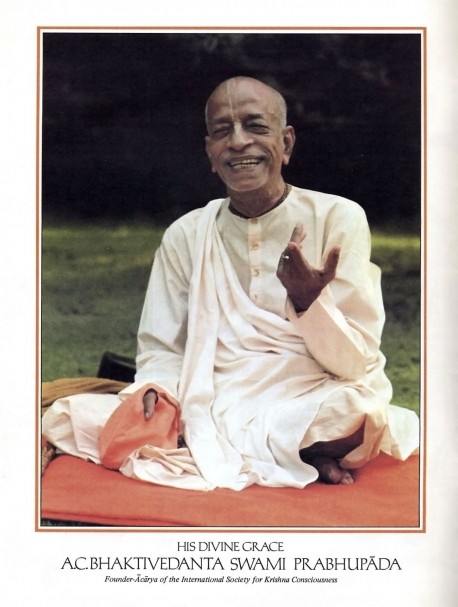 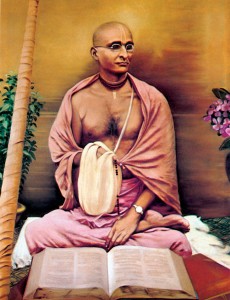 His Divine Grace A.C. Bhaktivedanta Swami Prabhupada first met his spiritual master, Srila Bhaktsiddhanta Sarasvati Gosvami Maharaja, in Calcutta in 1922. Srila Bhaktsiddhanta liked this educated young man and instructed him to preach the message of Krishna consciousness throughout the world.

Srila Prabhupada recalled the key to his approaching his spiritual master: “When I first started going to see my Guru Maharaja, he said of me, ‘This boy hears very nicely. He does not go away. So l shall make him a disciple.’ That was my qualification, or whatever you may call it. I would simply ask when Guru Maharaja would be speaking, then I’d sit down and go on hearing. I would not understand; others would disperse, I’d not disperse. So he remarked, ‘This boy is interested to hear.’ Because I was serious in hearing, I am now serious about kirtanam, which means speaking or preaching. If one has heard nicely, then he will speak nicely.”

At Allahabad in 1933, Srila Prabhupada was formally initiated, and in 1936, just days before Srila Bhaktsiddhanta Sarasvati’s departure from this mortal world, he was specifically ordered to spread Krishna consciousness in the English language in the West. Srila Prabhupada said at first he did not take the mission given to him by his spiritual master with the utmost seriousness. But then he was reading a Bhagavad-gita commentary written by Srila Bhaktivinode Thakura, who was the father of Srila Bhaktisiddhanta Sarasvati and the pioneer of the Krishna consciousness movement in the modern age. Srila Bhaktivinode has written that just as one cannot separate the body from the soul while in this conditioned state, so the disciple cannot separate the spiritual master’s order from his very life. His Divine Grace A.C. Bhaktivedanta Swami Prabhupada took these words very seriously, and his whole life became dedicated to carrying out the orders of his Guru Maharaja.

Srila Prabhupada takes sannyasa and travels to the United States

In 1959 he took sannyasa, the renounced order of spiritual life, and in 1965, at the advanced age of 70, His Divine Grace arrived in New York City to fulfil his spiritual masters sacred mission.

Srila Prabhupada produced his books by speaking them into a dictaphone. He sometimes worked on more than five books at once. These books are a matter of realization, as he said, “When you become self-realized, you automatically write volumes of books.” And one of the qualities of a devotee is he is poetic. Srila Prabhupada was always immersed in Krishna by speaking, dictating, singing about Krishna’s glories, preaching formally at meetings or planning the expansion of the Krishna consciousness movement. In the Bhagavad-gita, Seventh Chapter, it is stated that out of thousands of men, few seek perfection, and out of thousands who attain perfection, hardly one knows Krishna. Lord Krishna also declares in the Eighteenth Chapter that the dearmost devotee of all is he who spreads the teaching of love of Krishna, “Never will there be one dearer to me.”

Srila Prabhupada’s spiritual master, His Divine Grace Bhaktsiddhanta Sarasvati, once drew a picture of a mrdanga drum, the drum used on street chanting, and beside it a printing press. He said the mrdanga can be heard for several blocks, but that the press can be heard all around the world. He therefore called the printing press, “the big mrdanga.”

In 1968, Macmillan published the Bhagavad-gita As It Is, translated with commentary by Srila Prabhupada. The Gita is the gist of the entire Vedic literature. Just this one book can free one from the clutches of material nature and fix one in eternal loving service to Sri Krishna, the Supreme Personality of Godhead. Srila Prabhupada also wrote a summary study of the transcendental pastimes of Krishna entitled Krishna, the Supreme Personality of Godhead which was printed with the help of George Harrison who paid for the entire cost of printing the beautiful two-volume hardcover edition.

Srila Prabhupada published many books including Teachings of Lord Caitanya, which outlines the precepts of the golden incarnation of the Lord who appeared in India 500 years ago to propagate the Hare Krishna mantra as the means of God realization for the present age, and the Nectar of Devotion, a scientific study of the development of transcendental love. Srila Prabhupada also translated the entire Sri Caitanya-caritamrta, a seventeen volume description of the life and teachings of Lord Caitanya and the Srimad Bhagavatam, thirty volumes of the transcendental pastimes of Krishna, His incarnations and His devotees.

The literatures compiled by Srila Prabhupada are authorized by the disciplic succession which is descending from Krishna Himself; Srila Prabhupada’s whole mission in life was to faithfully pass on the original understanding of Krishna consciousness without distortion. According to the Vedic literature this descending process is the only way to realisation of the Absolute Truth, as the Absolute Truth is beyond the reach of mundane speculation or scholarship.

His Divine Grace was not a retired person, despite his prodigious literary output. He personally and very intimately guided his disciples through the most practical problems of daily life. Spiritual life is practical, and due to the predominant material atmosphere of Kali-yuga, often problematic. As spiritual master, Srila Prabhupada is the last recourse and the ultimate standard o f Krishna consciousness. He wrote some twenty-five letters a day to leaders and students of his various world-wide centers. Srila Prabhupada never resided in one place, he continually travelled from center to center and regularly spoke on Bhagavad-gita and Srimad Bhagavatam.

The spiritual master is responsible for his devotees; when he accepts a sincere soul as his disciple he promises to take him home, back to Godhead. No one should think, “Oh, everyone is taking a spiritual master; let me take one.” The spiritual master as a style or as a pet is useless. Rather, his order is to be taken as one’s life and soul. By taking shelter at the feet of the bona fide Guru and serving him twenty-four hours a day, the fallen soul can be lifted to the spiritual sky. It is said that if the spiritual master is pleased, then one can make great advancement in spiritual life. One pure, convinced devotee can make many pure devotees by his example and teachings. Those serious students with an understanding of the absolute value of the spiritual platform of life therefore honor the spiritual master with the honor due to God because the guru is the transparent via media or representative of God who distributes unalloyed love of God. The reader is, invited to take this philosophy with the utmost seriousness.

All Glories to Srila Prabhupada!