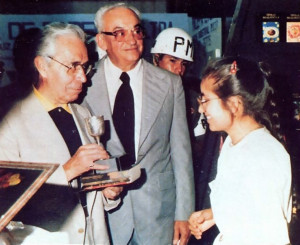 Bolivia’s president, Dr. Victor Paz Eastenssoro, received some of Srila Prabhupada’s books when he visited a Krsna consciousness booth at a fair held in Santa Cruz recently. The president’s acceptance of the books was an ecouraging sign for the devotees, who have been struggling against harassment by certain government agencies for several years.

New Cookbook to be Released

New York City—E. P. Dutton, one of the top ten publishers in the United States, and Bala Books, publisher of Krsna cultural books for children, recently signed an agreement to publish and distribute Lord Krsna’s Cuisine: The Art of Indian Vegetarian Cooking, by Yamuna-devi dasi. Bala Books will begin distributing the new cookbook early this year. It will be available in bookstores throughout the United States by October.

Yamuna-devi spent ten years compiling and testing the six hundred recipes that make up most of the nine-hundred page book. She learned much about Indian cuisine from her spiritual master, His Divine Grace A.C. Bhaktivedanta Swami Prabhupada, and her extensive travels in India have added to that knowledge and experience. Her book also contains numerous anecdotes about Srila Prabhupada.

Augmenting the volume are three hundred thirty illustrations by David Baird, widely known for his drawings in the Good Housekeeping and Reader’s Digest cookbooks. 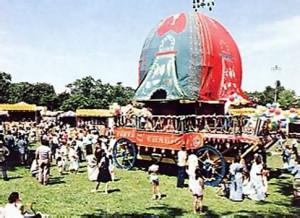 ISKCON’s founder and spiritual master, His Divine Grace A.C. Bhaktivedanta Swami Prabhupada, introduced Ratha-yatra to the West in 1967 in San Francisco. (He had been observing the ancient religious festival since his childhood and saw it as an ideal way to present Krsna consciousness to the American people.) Each year the San Francisco Ratha-yatra grew larger and more popular, and Ratha-yatra spread to other North American cities.

In the mid-seventies, Jayananda dasa, who had organized the first American Ratha-yatra, was eager to fulfill Srila Prabhupada’s desire that Krsna consciousness spread through the distribution of transcendental literature, prasadam (sanctified, vegetarian food), and the chanting of the Hare Krsna mantra. The Ratha-yatra festival seemed the ideal way to fulfill that desire.

In 1978 in Toronto, Caru dasa and Devi-deva dasa, inspired by Jayananda’s vision and by the success of the Rathayatra festivals already held in a few American cities, received a grant from the Bhaktivedanta Book Trust to start a traveling festival program that would bring Krsna conscious festivals to cities all over North America. Caru and Devi-deva went to Los Angeles, where they were assisted by Vatsala dasa, Drutakarma dasa, Vaibhavi-devi dasi, and others. The result was an impressive, transportable festival: huge chariots, informative exhibits, dioramas, a stage, a sound system, and colorful Indian tents.

Over the years the program has steadily expanded, and today residents of many North American cities consider Rathayatra and the Festival of India among the most colorful and exciting events of the year. The organizers of ISKCON’s traveling Ratha-yatra/Festival of India are planning more and bigger festivals than ever this year. Watch Back to Godhead magazine for information about festivals in your area.