“Thou Shalt Not Kill” — Meat Eating is Bad

Thou Shalt Not Kill

Not only is meat-eating unhealthy, uneconomical, and unkind, but all the world’s major religions condemn it. 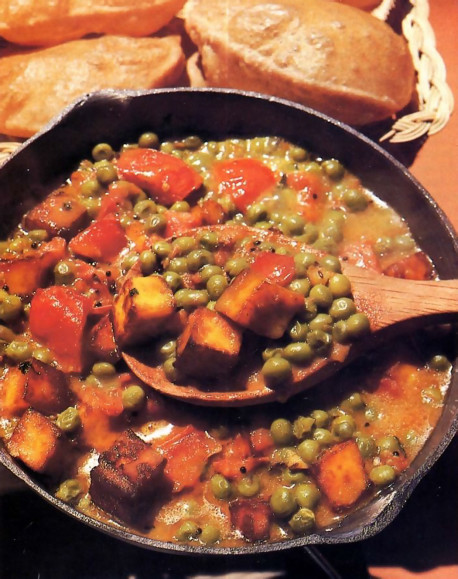 Meat-eating is bad for many reasons. For health reasons: “The inherent cholesterol, toxins, uric acid, high bacteria count, general indigestibility, and lack of fiber in the flesh of an animal whose life was aborted in turn shortens the life of the carnivore” (Mark Braunstein in Radical Vegetarianism). For economic reasons: “Land which will produce one ton of beef will produce ten to twenty tons of highly nutritive nonflesh foods” (Frances Moore Lappe in Diet for a Small Planet). For ethical reasons: “Those who kill animals for food will be more prone than vegetarians to torture and kill their fellow men” (Pythagoras).

And for religious reasons. Religion, as defined in the Vedic literature, means following the laws given by God. “Unfortunately,” Srila Prabhupada points out in his writings, “the so-called followers are not following. In the Christian Bible it is said, ‘Thou shalt not kill,’ but killing is a good business in the Christian world. There are so many slaughterhouses.”

In 1973 I was present when Srila Prabhupada and Cardinal Jean Danielou discussed this point in Paris. The Cardinal defended meat-eating, saying that human life is sacred but animals could be killed for food. Srila Prabhupada told him, “That is your interpretation. The commandment is ‘Thou shalt not kill.’ Human beings are meant to eat vegetarian food. The tiger does not come to eat your fruits. His prescribed food is animal flesh. But man’s food is vegetables, fruits, grains, and milk products. So how can you say that animal killing is not a sin? It is sinful, and as long as a man is sinful, he cannot understand God. The human being’s main business is to understand God and to love Him. But if you remain sinful you will never be able to understand God—what to speak of loving Him.”

Although the Bible may contain several passages that allow meat-eating (and even these are in question because the original Greek word for “food” has often been rendered as “meat” in English), these passages don’t justify meat-eating for Christians in general. In fact, Genesis and Leviticus contain many passages that expressly forbid meat-eating. But nowhere in the Bible do we find passages that forbid vegetarianism.

In addition, there is much evidence that many early Christian fathers were vegetarian and strongly urged their fellow Christians to give up meat-eating for ethical and spiritual reasons. St. John Chrysostom, a prominent early Church father, wrote, “We, the Christian leaders, practice abstinence from the flesh of animals to subdue our bodies. . . . The unnatural eating of flesh-meat is polluting.”

Like the early Christian leaders, today’s Christians should give up meat if they care at all about following Christ’s teachings—to repent, believe in God, and love Him with all our heart, and to be just, compassionate, charitable, and joyful. How does that tally with huge slaughterhouses, where countless innocent animals are massacred for our meals? Can anyone honestly believe Christ, the all-merciful son of God, would condone this?

Other religions also support meatless diets, although the so-called followers of those religions would have us believe otherwise. Abraham Isaac ha-Kohen Kook, the first Chief Rabbi of prestate Israel, said, “In the future ideal state . . . people’s lives will not be supported at the expense of the lives of animals.” And Dr. Richard H. Schwartz, author of Judaism and Vegetarianism, concludes, “In view of the strong Jewish mandates to be compassionate to animals, preserve health, help feed the hungry, preserve and protect the environment, and pursue peace, and [in view of] the very negative effects flesh-centered diets have in each of these areas, how do you justify not becoming a vegetarian?”

What about Islam? Well, around the beginning of the sixteenth century the Chand Kazi of Navadvipa, a learned scholar in the Koran, admitted that in the higher stages of Islam meat-eating is not recommended. And, of course, Buddhism is known for its doctrine of ahimsa, or nonviolence. Naturally, strict Buddhists follow a meatless diet.

But despite all this, just as we shrug our shoulders at the economic, ethical, and health reasons for vegetarianism, we also shrug at the religious reasons. But we do so at our own risk, because ultimately we face not an alternative of vegetarianism or nonvegetarianism but of following the laws of God or breaking His laws. It’s easy enough to break them, certainly—but it’s impossible to avoid the punishment.

Srila Prabhupada writes, “The animal killers do not know that in the future the animals will have a body suitable to kill them. That is the law of nature. Every living creature is the son of the Supreme Lord, and He does not tolerate even an ant’s being killed. One has to pay for it. So-called civilized nations are unnecessarily maintaining many slaughterhouses for killing innocent animals. When a nation is attacked by its enemies, the wholesale slaughter of the citizens should be taken as a reaction to their own sinful activities.”

It may seem like a great challenge in self-denial for a life-long meat-eater to give up his steaks and chops. But if you switch to prasadam, it’s a cinch. For example, if you crave protein-rich succulence, try preparing a fried cheese dish and offering it to Lord Krsna. A good one to start with is this month’s selection. You’ll find it much more satisfying than meat, because it satisfies Lord Krsna. And, miracle of miracles, meat will fade from your memory, just as it has from ours. 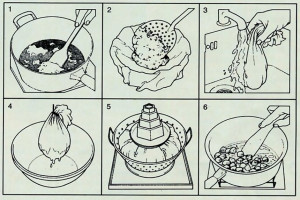 2. Pour the milk info a 4-quart saucepan and place over a high flame. Stir constantly and bring to a full frothing boil.

3. Reduce the flame to low and, before the foam subsides, pour in the lemon juice. Now very gently stir the milk. After 10 seconds, remove the pan from the heat but continue stirring. After one minute, the curds should solidify. If they haven’t solidified, place the milk over the flame again until lumps of fresh curd separate from the clear, pale yellow whey. If necessary, sprinkle in some more lemon juice.

4. As soon as the curds form, pour in 1 cup of hot water. Then set aside for 5 to 10 minutes, until the curd has settled to the bottom of the pan.

5. Gently lift out the lumps of curd with a large slotted spoon and transfer them to the colander or sieve lined with the cheesecloth. Strain the remaining whey through a fine-mesh wire strainer and collect the small pieces of curd. Combine all the curd in the cheesecloth.

6. Gather the four corners of the cheesecloth and lift out the curd. Rinse it for 5 to 10 seconds in a gentle stream of lukewarm water.

7. Gently twist the cheesecloth so that it loosely binds the hot curd. Hang the cheesecloth from a hook or kitchen cabinet knob so that the whey can drain into a bowl or the sink for at least 1 ½ hours.

Special Tips: Making each batch of curd is different. You may find that the cheese forms before all the suggested amount of lemon juice has been added. If this happens, don’t add any more juice. It will harden and toughen the delicate curds. Also, you may want to speed up the draining process by placing the freshly wrapped curd back in the colander or sieve, or on a flat surface such as the rim of your sink, and putting a 5- to 6-pound weight on top of it for ¾ to 1 ½ hours.

1. Cut the curd into ½-inch cubes and lay them on some paper towels for about 15 minutes to absorb the excess whey.

2. Over a medium flame, heat the ghee or vegetable oil in a 10- to 12-inch frying pan or 5- to 6-quart saucepan. When the ghee is hot, carefully add the curd cubes and, constantly turning them, fry until evenly browned on all sides. Now remove with a slotted spoon and set aside.

3. Into the frying pan place the ginger root, green chilies, cumin seeds, and black mustard seeds. Fry until the cumin seeds are brown and the mustard seeds turn gray and pop. Now add the tomatoes, powdered spices, sweetener, and ½ the fresh herbs and fry until the mixture thickens to a pulp and the ghee begins to separate from the tomatoes.

4. Add the fresh peas and whey or water, cover, and cook on a medium flame for 15 to 20 minutes or until the peas are tender. If you are using frozen peas, add them during the last 5 minutes of simmering the sauce.

5. Add the cheese cubes and salt, and simmer 5 minutes more. Before offering to Krsna, stir in the remaining herbs.