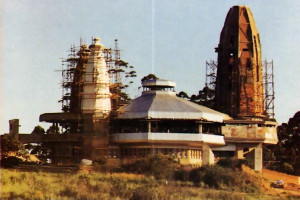 The structure covers more than four acres and has three spires, one rising twelve stories and two rising nine. When completed, the temple will seat 1,800 in its main hall. There will be classrooms, offices, living quarters, a large kitchen, a 700-seat amphitheater, and a pool of lotus flowers encircling the building.

The striking design—a union of traditional Vedic architectural principles and modern building techniques—is the work of Austrian-born architect Raja Rama dasa, who has helped build Hare Krsna temples in India. Before coming to Krsna consciousness a decade ago. Raja Rama worked as an apprentice in several prominent firms in Cologne.

“We realized that if we were to really build something special for the Lord, we’d have to manage the contracting ourselves. So we organized our own construction company.

“The African continent—maybe the whole Southern Hemisphere—has seen nothing quite like it. It’s already attracting many visitors, but just wait till it’s completed!”

Raja Rama and the other devotees in South Africa are so enthusiastic to build the temple that it reached the first-floor level in only three months and since then has consistently been going up ahead of schedule.

After the show Mr. Busch said, “All eight lights on my telephone were lit up like a Christmas tree. This show brought in the most calls I’ve ever had!” Mr. Busch also remarked that he and Srila Gurudeva made a good team. The show was so popular that Mr. Busch wants to schedule another program in a few months that would last longer and allow Srila Gurudeva to answer more calls.

Bombay—The Vishva Hindu Parishad (“The Universal Hindu Association”), a religious and social organization with more than five thousand branches worldwide, recently recognized ISKCON as “a great modern representative of Vaisnavism [devotional service to Visnu, or Krsna], preserving the purity of the soul and sanctity of actions for development of love of God.”

In a signed statement, VHP president Maharana B. S. Mewar said, “We Hindus consider the activities of ISKCON to be an integral part of our life to preserve and propagate the pure Vedic culture and thought for the preservation of mankind.”

The paper recommends ISKCON’s centers as “oases for Hindus living and traveling abroad, a source of great inspiration and spiritual strength.”

The VHP statement concludes, “The religious tradition that ISKCON represents is the oldest and purest in its approach to life in the world, and all respect should be shown to this great and noble work.”

Kudos for Srila Prabhupada, Srimad-Bhagavatam,
From Head of Library Association

“I strongly recommend the Bhaktivedanta Book Trust edition of the ancient classic Srimad-Bhagavatam to all students of Indian philosophy and culture. The original text is presented along with Roman transliteration, word-for-word synonyms, accurate translation, and extremely lucid commentary and exposition. It is a remarkable work, definitely a landmark in the matter of elevating humanity toward world unification and divine consciousness.

“The learned author, His Divine Grace A.C. Bhaktivedanta Swami Prabhupada, was a world-renowned saint and savant in the field of Vedic philosophy and its practical application in the modern world. He was unequaled in his efforts to establish the Vedic way of life in all countries of the world.”