Back to Godhead > Prabhupada > Prabhupada's Books > Srimad-Bhagavatam: As Brilliant as the Sun

Srimad-Bhagavatam: As Brilliant as the Sun

An excerpt from the foremost book of spiritual knowledge,
Srimad-Bhagavatam, with translation and purport by
His Divine Grace A.C. Bhaktivedanta Swami Prabhupada.

This Bhagavata Purana [Srimad-Bhagavatam] is as brilliant as the sun, and it has arisen just after the departure of Lord Krsna to His own abode, accompanied by religion, knowledge, and so on. Persons who have lost their vision because of the dense darkness of ignorance in the Age of Kali will get light from this Purana. 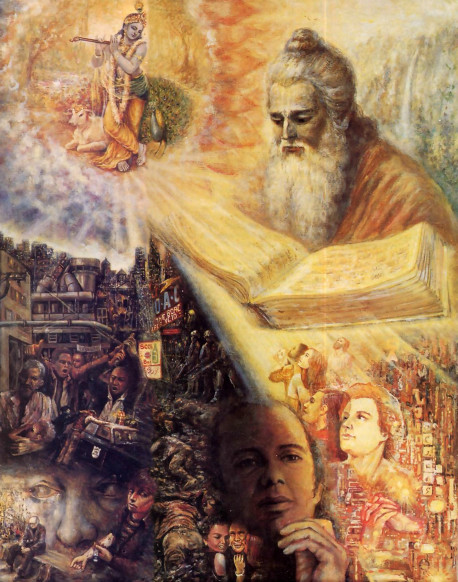 As Lord Krsna says in the Bhagavad-gita, when He descends to the material world He displays Himself and all His paraphernalia by His internal potency, called atma-maya. His form, name, fame, paraphernalia, abode, and so on are therefore not creations of matter.

Real religion means to know God, our relation with Him, our duties in relation with Him, and ultimately our destination after leaving this material body. The conditioned souls, who are entrapped by the material energy, know hardly anything of these principles of life. Most of the conditioned souls are like animals—engaged simply in eating, sleeping, fearing and mating. They are mostly engaged in sense enjoyment under the pretension of religiosity, knowledge or salvation.

The conditioned souls are still more blind in the present age, the Age of Quarrel, or Kali-yuga. In the Kali-yuga the population is just a royal edition of the animals. They have nothing to do with spiritual knowledge or godly religious life. They are so blind that they cannot see anything beyond the needs of the body. They have no information of the spirit soul, which is beyond the jurisdiction of the subtle mind, intelligence and ego, but they are very proud of their advancement in knowledge, science and material prosperity. Having completely lost sight of the ultimate aim of life, they risk becoming a dog or hog just after leaving their present body.

The Personality of Godhead Sri Krsna, appeared before us just a little prior to the beginning of Kali-yuga [five thousand years ago], and He returned to His eternal home practically at the commencement of Kali-yuga. While He was present, He exhibited everything by His different activities. Specifically, He spoke the Bhagavad-gita and thus eradicated all pretentious principles of religiosity. And prior to His departure from this material world, He empowered Sri Vyasadeva through Narada to compile the messages of the Srimad-Bhagavatam.

Thus the Bhagavad-gita and the Srimad–Bhagavatam are like torches for the blind people of this age. In other words, if men in this age of Kali want to see the real light of life, they must take to these two books alone. Then their aim of life will be fulfilled.