Back to Godhead > Prabhupada > On Christians, Communists, and Cow-Killers

On Christians, Communists, and Cow-Killers

On Christians, Communists, and Cow-Killers 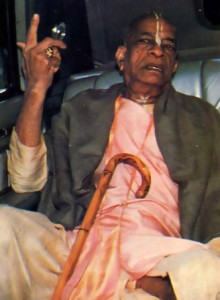 What follows is the conclusion of a conversation that took place between His Divine Grace A.C. Bhaktivedanta Swami Prabhupada and some of his disciples during an early-morning walk in March 1975 in Dallas.

Srila Prabhupada: The Christians say, “We can commit all kinds of sin, but Christ will take our sins on himself. He has taken a contract.” Do they not say something like that?

Srila Prabhupada: Poor Christ has to suffer for all their sinful activities. “He wanted to save us from sin,” they say, “so he gave us an injunction that we don’t have to care whether we sin or not.” This is hypocrisy.

In Melbourne I was invited by some priests to speak. They asked me, “Why do you think the Christian religion is dwindling? What have we done?” So I replied, “What have you not done? You claim that you are followers of Jesus Christ, yet you are performing all kinds of sinful activities. Therefore you will soon have to close down this hypocrisy.” They were not very much pleased with that answer.

“What have we done?” they ask. They have done so many sinful things, but they do not admit they are sinful. This is hypocrisy. In the Ten Commandments the Bible clearly says, “Thou shalt not kill.” But they’ll not obey. That is sinful.

Willful sinners. If one acts sinfully out of ignorance there may be some concession, but they are knowingly sinful. They know that killing cows is sinful, yet still they are doing it.

Devotee: The communists also argue that the Christian religion is hypocrisy. They say it is “the opiate of the people.” So they want to abolish it.

Srila Prabhupada: The communists have had a bad experience with the Christian religion, and they have no information that there is a need of religion. So they want to abolish all religion.

Devotee: The communists say that the problems of the world are so great that unless people give allegiance to a world government, the problems cannot be solved.

Srila Prabhupada: We also say that. Krsna is the Supreme Lord; take shelter of Him and all problems will be solved. That we are also teaching.

Devotee: But the communists have missed the point that Krsna must be recognized as the Supreme Lord.

Srila Prabhupada: Ekale isvara krsna, ara saba bhrtya: “The only master is Krsna. Everyone else is His servant.” This is the central principle of the Bhagavad-gita. Accept this principle and everything will be all right, immediately.

If you study the Bhagavad-gita, you won’t find any word that you can refute or that is not good for you. The whole Bhagavad-gita is practical—very congenial for human civilization. First Krsna teaches that you must learn who you are. You are not the body. You are a spirit soul within the body. Who knows this? This is the first lesson Krsna teaches in the Bhagavad-gita. As soon as you understand that you are not the body but that you are within the body, you understand what spirit is. Then your spiritual knowledge advances further. But the rascals do not know what spirit is. So they have no spiritual knowledge.

Devotee: They think cows have no spirit.

Srila Prabhupada: Do you believe that?

Devotee: No. Cows have spirit. The spirit soul makes the body work.

Srila Prabhupada: You can kill the baby in the womb. Advancement of ignorance is accepted as advancement of civilization. Why? Because there is no spiritual knowledge.

[Srila Prabhupada and his disciples pass a man playing golf.]

Devotee: That man thinks he has retired from working hard, but he’s still working hard just to put a ball in a hole.

Srila Prabhupada: What else can he do? He doesn’t know that there is another engagement—spiritual life. That is his ignorance.

When there was an electricity failure in New York, the statistics showed that more women became pregnant. What else could people do in the darkness? “Let us have sex.” That’s all.