Back to Godhead > ~Featured~ > The Highest Enjoyment

Spiritual Bliss In The Company Of The Lord

You can’t buy it or steal it, but you can taste it by learning to love Krsna.

by His Divine Grace
A.C. Bhaktivedanta Swami Prabhupada
Founder-Acarya of the International Society for Krishna Consciousness 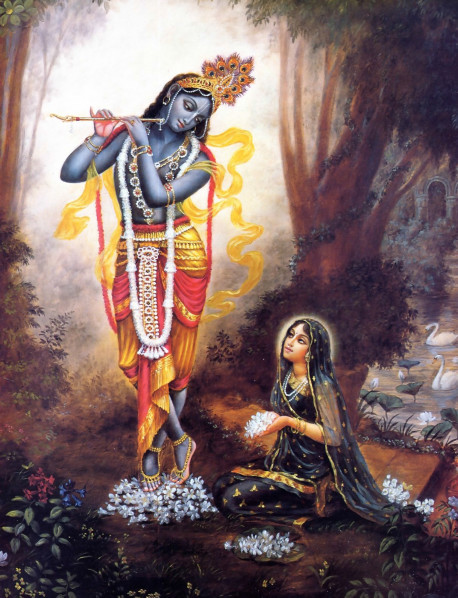 Happiness finds perfection in the love between Lord Sri Krsna and His greatest worshiper, Srimati Radharani.

This article is reprinted from a BACK TO GODHEAD Srila Prabhupada published in Delhi in 1956.

In the revealed scriptures the Supreme Lord is described as sac-cid-ananda-vigraha. Sat means “eternal,” cit means “fully cognizant,” ananda means “joyful,” and vigraha means “a specific personality.” Therefore the Lord, or the Supreme Godhead who is one without a second, is an eternal, joyful personality with a full sense of His own identity. That is a concise description of the Supreme Lord, and no one is equal to or greater than Him.

The living entities, or jivas, are minute samples of the Supreme Lord, and therefore we find in their activities the desire for eternal existence, the desire for knowledge of everything, and an urge for seeking happiness in diverse ways. These three qualities of the living being are minutely visible in human society, but they are increased and enjoyed one hundred times more by the beings who reside in the upper planets, which are called Bhurloka, Svarloka, Janaloka, Tapoloka, Maharloka, Brahmaloka, and so forth.

But even the standard of enjoyment on the highest planet in the material world, which is thousands and thousands of times superior to what we enjoy on this earth, is also described as insignificant in comparison to the spiritual bliss enjoyed in the company of the Supreme Lord. His loving service in different mellows (relationships) makes even the enjoyment of merging with the impersonal spiritual effulgence as insignificant as a drop of water compared with the ocean.

Every living being is ambitious to have the topmost level of enjoyment in the material world, and yet one is always unhappy here. This unhappiness is present on all the above-mentioned planets, in spite of a long life span and high standards of comfort.

That is the law of material nature. One can increase the duration of life and standard of comfort to the highest capacity, and yet by the law of material nature one will be unhappy. The reason is that the quality of happiness suitable for our constitution is different from the happiness derived from material activities. The living entity is a minute particle of sac-cid-ananda-vigraha, and therefore he necessarily has a propensity for joyfulness that is spiritual in quality. But he is vainly trying to derive his spiritual joyfulness from the foreign atmosphere of the material nature.

A fish that is taken out of the water cannot be happy by any arrangement for happiness on the land—it must have an aquatic habitation. In the same way, the minute sac-cid-ananda living entity cannot be really happy through any amount of material planning conceived by his illusioned brain. Therefore, the living entity must be given a different type of happiness, a transcendental happiness which is called spiritual bliss. Our ambitions should be aimed at enjoying spiritual bliss and not material happiness.

The ambition for spiritual bliss is good, but the method of attaining this standard is not merely to negate material happiness. Theoretical negation of material activities, as propounded by Sripada Sankaracarya, may be relevant for an insignificant section of men, but the devotional activities propounded by Sri Caitanya Mahaprabhu are the best and surest way of attaining spiritual bliss. In fact, they change the very face of material nature.

Hankering after material happiness is called lust, and in the long run lustful activities are sure to meet with frustration. The body of a venomous snake is very cool. But if a man wants to enjoy the coolness of the snake’s body and therefore garlands himself with the snake, then surely he will be killed by the snake’s bite. The material senses are like snakes, and indulging in so-called material happiness surely kills one’s spiritual self-awareness. Therefore a sane man should be ambitious to find the real source of happiness.

Once, a foolish man who had no experience of the taste of sugarcane was told by a friend to taste its sweetness. When the man inquired about sugarcane’s appearance, the friend imperfectly informed him that sugarcane resembles a bamboo stick. The foolish man therefore began trying to extract sugarcane juice from a dry bamboo stick, but naturally he was baffled in his attempt.

That is the position of the illusioned living being in his search for eternal happiness within the material world, which is not only full of miseries but also transient and flickering. In the Bhagavad-gita, the material world is described as full of miseries. The ambition for happiness is good, but the attempt to derive it from inert matter by so-called scientific arrangements is an illusion. Befooled persons cannot understand this. The Gita (16.13) describes how a person driven by the lust for material happiness thinks: “So much wealth do I have today, and I will gain more according to my schemes. So much is mine now, and it will increase in the future.”

The atheistic, or godless, civilization is a huge affair of sense gratification, and everyone is now mad after money to keep up an empty show. Everyone is seeking money because that is the medium of exchange for sense-gratificatory objects. To expect peace in such an atmosphere of gold-rush pandemonium is a Utopian dream. As long as there is even a slight tinge of madness for sense gratification, peace will remain far, far away. The reason is that by nature everyone is an eternal servitor of the Supreme Lord and therefore we cannot enjoy anything for our personal interest. We have to employ everything in transcendental service for the interest of the Lord. This alone can bring about the desired peace. A part of the body cannot make itself satisfied; it can only serve the whole body and derive satisfaction from that service. But now everyone is busy in self-interested business, and no one is prepared to serve the Lord. That is the basic cause of material existence.

As a result of all the unlawful money-making, there is no scarcity of money in the world. But there is a scarcity of peace. Since the whole of our human energy has been diverted to this moneymaking, the moneymaking capacity of the total population has certainly increased. But the result is that such an unrestricted and unlawful inflation of money has created a bad economy and has enabled us to manufacture huge, costly weapons that threaten to destroy the very result of such money-making.

Instead of enjoying peace, the leaders of big moneymaking countries are now making big plans how they can save themselves from the modern destructive weapons, and yet a huge sum of money is being thrown into the sea for experiments with such dreadful weapons. Such experiments are being carried out not only at huge monetary costs but also at the cost of many poor lives, thereby binding such nations to the laws of karma. That is the illusion of material nature. As a result of the impulse for sense gratification, money is earned by spoiled energy, and it is then spent for the destruction of the human race. The energy of the human race is thus spoiled by the law of nature because that energy is diverted from the service of the Lord, who is actually the owner of all energies.

Such unlawfully accumulated money is now being snatched away from the miserly citizens by various methods of state taxation for the various national and international war funds, which spend the money in a wasteful manner. The citizen is no longer satisfied with just enough money to maintain his family nicely and cultivate spiritual knowledge, both of which are essential in human life. He now wants money unlimitedly for satisfying insatiable desires, and in proportion to his unlawful desires his accumulated money is now being taken away by the agents of the illusory nature in the shape of medical practitioners, lawyers, tax collectors, societies, institutions, and so-called religionists, as well as by famines, earthquakes, and many other such calamities.

One miser who, under the dictation of the illusory nature, hesitated to purchase a copy of BACK TO GODHEAD, spent twenty-five hundred dollars for a week’s supply of medicine and then died. A similar thing happened when a man who refused to spend a cent for the service of the Lord wasted thirty-five hundred dollars in a legal suit between the members of his household. That is the law of nature. If money is not devoted to the service of the Lord, by the law of nature it must be spent as spoiled energy in the fight against legal problems, diseases, and so on. Foolish people have no eyes to see such facts, so necessarily the laws of the Supreme Lord befool them.

The laws of nature do not allow us to accept more money than is required for proper maintenance. There is ample arrangement by the law of nature to provide every living being with his due share of food and shelter, but the insatiable lust of the human being has disturbed the whole arrangement of the Almighty Father of all species of life.

By the arrangement of the Supreme Lord, there is an ocean of salt, because salt is necessary for the living being. In the same manner, God has arranged for sufficient air and light, which are also essential for the living being. One can collect any amount of salt from the storehouse, but one cannot take more salt than he needs. If he takes more salt he spoils the broth, and if he takes less salt his eatables become tasteless. On the other hand, if he takes only what he absolutely requires, the food is tasty, and he is healthy. So ambition for wealth, for more than we need, is harmful, just as eating more salt than we absolutely need is harmful. That is the law of nature.