Back to Godhead > Devotees > Preaching > Vegetarianism > The Kachori Story

On the anniversary of Srila Prabhupada’s appearance,
his followers celebrate by preparing one of his favorite dishes—
these spicy vegetable savories. 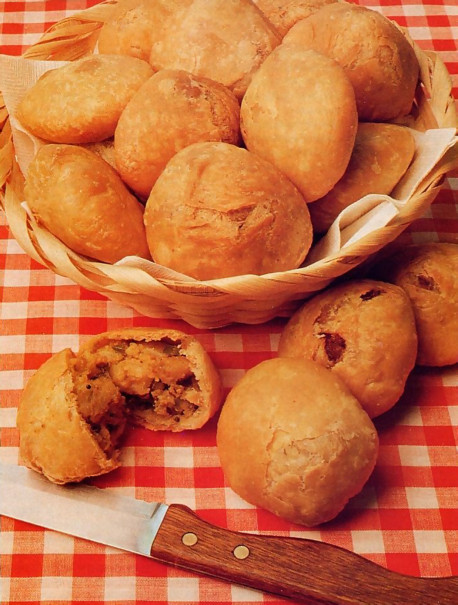 Every morning at Hare Krsna temples around the world, devotees gather to sing Sri Sri Gurvastaka, eight Sanskrit verses praising the spiritual master. These verses describe the characteristics of a genuine spiritual master. The fourth verse says that a genuine spiritual master encourages the distribution of prasadam [food offered to Lord Krsna.] to the public. As Srila Prabhupada explains, “Ours is not a dry philosophy—simply talk and go away. No. We distribute prasadam, very sumptuous prasadam. In every temple we offer prasadam to anyone who comes. In each and every temple we already have from fifty to two hundred devotees, and outsiders also come and take prasadam. So prasadam distribution is a symptom of the guru.

“Prasadam is not ordinary food, because prasadam has the potency to make us gradually become spiritualized. Therefore it is said that realization of God begins with the tongue. By engaging our tongue in the service of the Lord, then we realize God. So what is that engagement of the tongue? We chant the holy name of the Lord, and we take His prasadam. Then, by these two methods, we become God realized. You don’t have to be very highly educated or be a philosopher, a scientist, or a rich man to realize God. If you just sincerely engage your tongue in the service of the Lord, you will realize Him. It’s so simple. That’s why the guru introduces this prasadam program. And when the guru sees that prasadam distribution is going on, he is very pleased.”

This month we’re especially remembering Srila Prabhupada, since August is his appearance day anniversary. Once in India when he was offered potato chidwa (a deep-fried, salty snack), he commented that this dish was one of his spiritual master’s favorite afternoon refreshments and that just by tasting it he thought of his spiritual master. Similarly, one of Srila Prabhupada’s favorite dishes was kachoris (spicy, vegetable-stuffed fried pastries). And by preparing, offering, tasting, and distributing kachoris, we can relish thoughts of Srila Prabhupada.

As a child, Srila Prabhupada had several nicknames. One was kachori-mukhi, because of his fondness for kachoris. Both his mother and grandmother would give him kachoris, which he kept in the many pockets of his vest. He liked to watch the vendors cooking on the busy roadside, and he would accept kachoris from them and also from the neighbors, until all his inside and outside vest pockets were filled.

Sometimes when he demanded that his mother make him kachoris, she would refuse. Once she even sent him to bed. But when his father came home and discovered this, he said, “No, we should make them for him.” And he woke his son and personally cooked kachoris for him.

Many years later, as Srila Prabhupada was beginning the first Hare Krsna center, at 26 Second Avenue in New York, he arranged a lavish feast for the first Krsna conscious wedding ceremony in America. And at that sixteen-course meal, kachoris were the piece de resistance. (Yamuna-devi dasi, whose recipes appear on these pages each month, spent six hours the day before the feast stuffing potato kachoris.) After tasting Srila Prabhupada’s kachoris at the wedding feast, one young man resolved on the spot to dedicate himself to Krsna consciousness and become Srila Prabhupada’s disciple as soon as possible.

Some years later, after Srila Prabhupada had established a worldwide confederation of more than one hundred temples, institutes, schools, and farm communities, he stayed at his Krishna-Balaram Mandir in Vrndavana, India. Although his health was not good and his digestion was weak, he asked one evening for some of the kachoris that had just been offered to the Deities. His disciples hesitated. Prabhupada was nearly eighty, and for years he had been traveling nonstop, preaching Krsna consciousness on six continents, writing dozens of books, and initiating thousands of disciples. The two senior disciples present tried to convince Prabhupada that kachoris were too rich and that there were other dishes that would be easier for him to digest. But Srila Prabhupada ate kachoris anyway, digesting them without difficulty.

Preparing, eating, and distributing krsna-prasadam is only one aspect of the transcendental, Krsna conscious culture that Srila Prabhupada introduced in the West and revived within India. A divinely empowered representative of God, Prabhupada carried and freely gave life’s greatest treasure: love of God. Those who received this gift feel that they cannot begin to repay him for it. The best they can do is to follow his teachings and, at least on the anniversary of his appearance, prepare and distribute kachoris for his pleasure. 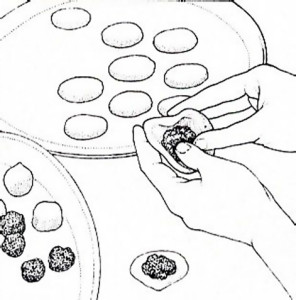 Ingredients for the pastry:

Ingredients for the pea stuffing:

To prepare the pastry:

1. Mix the flour, sugar, and salt in a deep mixing bowl. Add the butter or ghee and rub the flour-ghee mixture between your fingertips until its consistency is similar to dry oatmeal. Make a well in the center, pour in ½ cup of cold water, and quickly stir and gather the mixture into a ball. It may be necessary to sprinkle in up to 1 more tablespoon of water, adding 1 teaspoon at a time, to allow the dough to adhere into a mass and reach a soft, smooth texture.

2. Knead the dough for about 8 to 10 minutes or until the dough is soft, smooth, pliable, and elastic. Shape into a ball, place in a bowl, drape with a moist towel, and allow the dough to sit for at least 30 minutes while preparing the stuffing.

To prepare the pea stuffing:

1. Place the peas in a mixing bowl and mash them with a fork until they form a wet, semi-solid pulp.

2. Heat the ghee or oil in an 8- to 10-inch frying pan over medium heat for 1 ½ minutes. Add the hot chilies and ginger root; stir-fry until golden brown. Sprinkle in the asafetida powder, fry for a few seconds, then stir in the pea puree, and fry until the mixture is dry.

3. Remove from the heat and stir in the remaining ingredients. Transfer the mixture to a plate to cool. Divide into 17 or 18 balls.

To shape and fry the kachoris:

1. Cut the dough into two equal pieces. Roll each piece into a 9-inch-long log. Score and cut each into nine 1-inch pieces. Drape a moist cloth over the pellets.

2. Take one piece of dough and press it between your palms, flattening it into a 2 ½-inch disk. Gently press around the edges with your thumb and fingertips to thin slightly. Place a pellet of the stuffing in the center of the dough and pull the dough around the filling to close it. Pinch the edges together until thoroughly sealed, then gently press the excess dough back into the pastry. Try to pinch the seams closed; the surface of the pastry must be devoid of cracks. With the pastry resting in the right palm, seam side up, press with the heel of your left palm and evenly flatten the pastry into a 2 ¼-inch-round cake about ½-inch thick.

The dough on the finished cake should have an even thickness, for a thin spot will burst during frying. Place the pastry, seam-side down, on a platter. Finish shaping and stuffing the remaining pastries.

3. Heat the ghee or oil over a medium to medium-low flame until the temperature rises to about 240°F on a frying thermometer. Slip in 9 pastries, seam-side down. The ghee or oil temperature will fall to about 220 to 225°F. Now, slowly fry the pastries for about 23 to 27 minutes. Use a wooden spoon for turning the delicate pastries. Remove and drain with a metal frying spoon. The following general temperatures and corresponding times may be helpful guidelines.

4. Offer the piping hot pastries to Krsna. Keep warm until served, in a preheated 250° oven on an uncovered baking dish lined with paper towels. Or serve at room temperature.

Ingredients for the pastry:

To prepare the pastry:

Prepare as directed in the previous recipe, but combine the yogurt and water before adding to the dry ingredients.

To prepare the potato stuffing:

1. Heat the ghee or oil in a small frying pan over medium-high flame for about ½ minute, then add the minced chilies, ginger, and mustard seeds and fry until the mustard seeds sputter and pop. Drop in the potatoes, mashed coarse, and stir-fry for 1 to 2 minutes.

2. Remove from the heat, add the remaining ingredients; blend well. Pour onto a plate, cool, and divide into 17 or 18 even-sized balls.

To shape and fry the kachoris:

Divide the dough into 17 or 18 pieces. Then prepare as directed in steps 1 through 4 in the previous recipe.