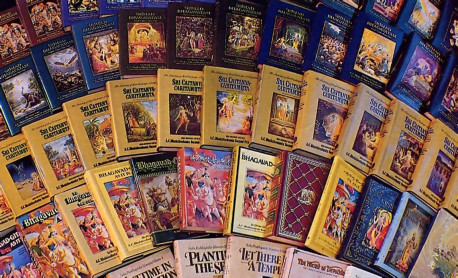 Have you ever met a Hare Krsna devotee in an airport, a parking lot, or on the street distributing books and collecting donations? Many people wonder why we do this. I’ve been distributing books for over six years, and I’d like to tell you something about the origin of book distribution. 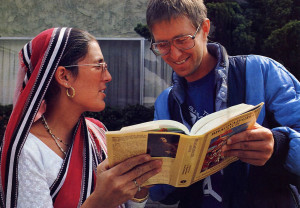 A devotee in Los Angeles explains the merits of Bhagavad-gita

Devotees are not ordinary booksellers; their bookselling is transcendental. It is sankirtana, the glorification of Krsna, the Supreme Personality of Godhead.

Sankirtana can be executed very easily, without great endeavor or expense. One can simply chant the Hare Krsna mantra by himself or with others. Or one can read about and discuss the pastimes of the Lord and His devotees. When we give someone a book, we allow him to get in touch with the philosophy and pastimes of Krsna. Any donation he gives helps support the book publication and the temples of the Krsna consciousness movement. Temples worldwide distribute prasadam (spiritual food) free of charge and give people the opportunity to come and take part in spiritual activities. And all of this is sankirtana, the glorification of Lord Krsna, which is what Krsna consciousness is all about.

Sankirtana is not new. Five hundred years ago in West Bengal, India, Lord Caitanya—Krsna Himself in the role of His own devotee—came to establish sankirtana as the process of purification in this age. At that time, many persons believed that one could attain perfection only by intense study of Sanskrit and the Vedas. They would spend their whole lives memorizing and discussing verses. Many also believed that spiritual life was open only to those bom in the families of brahmanas, or intellectuals. Lord Caitanya, however, did not concern Himself with caste distinctions, nor did He require candidates for spiritual life to possess vast amounts of learning. He allowed everyone the opportunity to engage in the service of God simply by chanting the holy names: Hare Krsna, Hare Krsna, Krsna Krsna, Hare Hare/ Hare Rama, Hare Rama, Rama Rama, Hare Hare.

Lord Caitanya desired that the chanting of the holy names of God be spread to every town and village in the world. Traveling widely throughout India, He introduced people to the chanting of Hare Krsna and also asked them to give the chanting to others. He directed His most competent disciples to write books elaborating all aspects of devotional service to Krsna, for the benefit of people in the future.

After Lord Caitanya left this world, many persons claiming to be His followers changed the essence of His teachings, until by the 1800s His teachings were no longer respected by intelligent, educated persons. Then, on September 2,1838, Bhaktivinoda Thakura, a pure devotee of Lord Caitanya, was born in India. Although a highly placed government magistrate and the father of ten, Bhaktivinoda Thakura would rise very early every morning to write essays, books, poems, and songs about devotional service to Lord Krsna. Thus, through his writings and personal influence, he reestablished the purity and deep meaning of Lord Caitanya’s teachings. 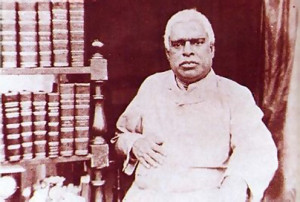 Bhaktivinoda was very concerned that the message of Lord Caitanya be spread throughout the world, and he prayed to the Lord for a son to help him accomplish this mission. On February 6, 1874, Bhaktisiddhanta Sarasvati Thakura was born to him in Jagannatha Puri. Even as a young boy, Bhaktisiddhanta Sarasvati was an avid scholar of Vedic literature, and his father trained him in proofreading and publishing his magazine, Sajjana-tosani. By age twenty-five, Bhaktisiddhanta Sarasvati had established himself as an outstanding author and scholar. He never married, but directed all his attention to the distribution of Krsna consciousness. He initiated many disciples and established the Gaudiya Math, a unified group of devotees, temples, and presses throughout India. 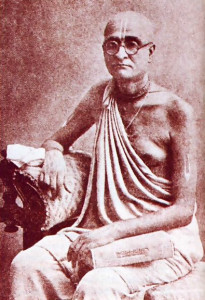 Bhaktisiddhanta Sarasvati was very eager to see that Lord Caitanya’s teachings be spread worldwide, and he always urged his disciples to take Krsna consciousness to the West, where most people were ignorant of spiritual life. One of Srila Bhaktisiddhanta Sarasvati’s disciples, His Divine Grace A.C. Bhaktivedanta Swami Prabhupada, very successfully carried out this instruction. 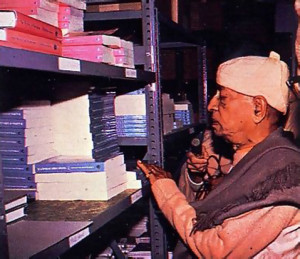 Srila Prabhupada inspects his book warehouse in Los Angeles. He inherited the Krsna conscious tradition as it came down from Srila Bhaktivinoda Thakura and Srila Bhaktisiddhanta Sarasvati.

Srila Prabhupada was born on September 1, 1896, in Calcutta. An astrologer predicted that the child would be a great devotee of the Lord and in his later years would be a very successful religious leader, opening 108 temples around the world. His father, Gour Mohan De, was a pure devotee and very carefully trained Prabhupada in all the principles of devotional service.

In 1922, Prabhupada met Srila Bhaktisiddhanta. At that time, Bhaktisiddhanta requested Prabhupada to spread Krsna consciousness in the West. From that first meeting, Prabhupada began planning how to carry out this instruction. In 1944, he began to publish a monthly magazine in English called BACK TO GODHEAD, which he would distribute to many people in India as well as abroad. In 1962, after retiring from family life, he began to translate into English and write commentary on the Srimad-Bhagavatam, India’s great spiritual classic, and by January 1965 he had published the first three volumes. With these books he felt confident to travel to America and spread Krsna consciousness. 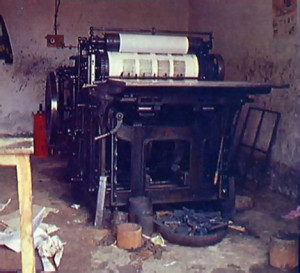 The press in New Delhi that printed the first volume of Srila Prabhupada’s English-language Srimad-Bhagavatam in 1962.

After one year in America, Prabhupada had gathered a few followers, and in 1966 he officially incorporated the International Society for Krishna Consciousness (ISKCON). He initiated many disciples, some of whom he then sent to various cities to establish more centers. At first additional centers sprang up in America, then in Canada, Europe, India, and eventually all around the world. But the prime means for spreading Krsna consciousness, Prabhupada emphasized, was the distribution of transcendental literature.

Following the instructions of Lord Caitanya and Srila Prabhupada, the devotees in ISKCON are enthusiastically distributing books for the benefit of people everywhere. So, when you meet the devotees collecting donations, remember that they’re not out to exploit you by taking your money to give it to some big man at the top or to keep it for themselves. The members of ISKCON want to give people the opportunity to find out about Krsna consciousness and thus perfect their lives. 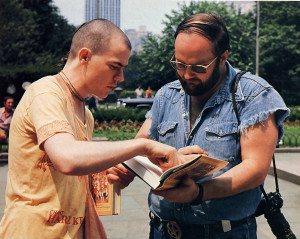 Charitable organizations abound, but to give a suffering person free food or medical treatment is incomplete, because it neglects to give a person the knowledge that he is not his body but an eternal spirit soul, servant of Krsna. As long as one does not have transcendental knowledge, he must repeatedly suffer birth, disease, old age, and death. All problems are due simply to a lack of God consciousness. 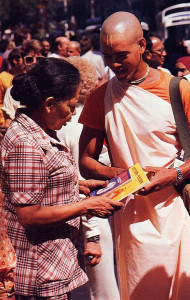 in Mexico, and all over the world, devotees distribute books on Krsna consciousness.

The books the members of ISKCON are distributing present the science of God consciousness and explain how it can be implemented in society. The devotees who are distributing these books understand the urgency of presenting this message, and therefore they work with great determination. But it’s not easy. Most people are not inclined toward spiritual life, and a devotee has to tolerate a lot of rejection and harsh treatment, just as he tolerates the heat, cold, rain, and snow. You may have seen a devotee untiringly approaching people despite continual rejection, or running up to people in a parking lot for hours on a freezing winter day. Some people think that these devotees get a lot of money for this or that they’re “brainwashed,” because this kind of voluntary enthusiasm and determination isn’t ordinary. But for the devotee, distributing transcendental literature isn’t an ordinary job, and he derives transcendental satisfaction from meeting receptive people and from knowing he’s pleasing his spiritual master and Krsna.

Now hundreds of devotees all over the world are distributing Krsna conscious literature, and the desire of the great spiritual masters and the Supreme Lord is being fulfilled. The “brhat mrdanga” is being heard all over the world, and people are being benefited.