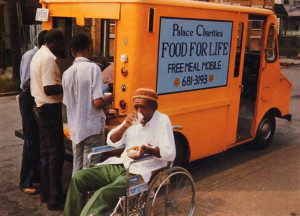 Up to four hundred people a day obtained hot meals from the “Free Meal Mobile” in Cleveland in the summer of 1983. Now, with $20,000 from the city, ISKCON’s Food for Life program will expand.

Cleveland, Ohio—By a vote of 21-0, the city council here recently approved a $20,000 grant to fund ISKCON’s local Hare Krsna Food for Life program. His Holiness Tapah-punja Swami, president of the Cleveland Hare Krsna temple, announced that the grant from the U.S. Department of Housing and Urban Development (HUD) will be used to provide 2,400 meals a month for poor people in the city’s Garden Valley neighborhood. “We are grateful the city is open-minded enough to provide this wonderful opportunity,” he said.

City councilman Lonnie L. Burten said he supported the grant because ISKCON has a proven record of supplying food to poor people. “They can take $15,000 and do what the average food program does with $75,000 or $100,000 because of the way they cook it,” said Burten.

Last summer the devotees distributed hot meals from a converted postal truck called the “Free Meal Mobile.” “We were feeding up to four hundred people in forgotten neighborhoods in a few short hours each day,” Tapah-punja Swami recalls. “I think the city was moved by our honest gesture.”

“We don’t expect any personal salaries,” he explains. “All the funds will be spent for purchasing and distributing food. Simply stated, we can serve better food to more people for less money, and we’re going to prove it.”

The Cleveland devotees operate their Food for Life program under the direction of one of ISKCON’s present spiritual masters, His Divine Grace Srila Kirtanananda Swami Bhaktipada. Several years ago their low-cost Govinda’s restaurant won the esteem of the entire city council, which issued a resolution recognizing them for their selfless work.

Tapah-punja Swami says that in addition to providing delicious food he will offer training about nutrition to participants in the free-meals program. “Here in America, the hunger problem is not lack of food,” he explains, “but that the people are trained to eat the wrong kinds of food. People are overfed, but undernourished. In India, Krsna consciousness is called ‘the kitchen religion.’ We believe that if food is prepared in a mood of love and devotion to God, people benefit not only materially but spiritually as well.” 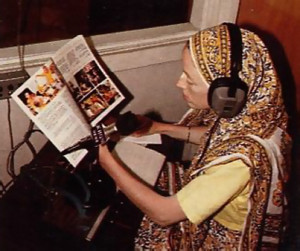 Currently the station can reach only part of Salt Lake City, but with new equipment soon to be installed, its audience there will substantially increase.

Formerly a country-western station, the sudden change-over to “Sanskrit contemporary-wave music” and a diversity of message-oriented programs immediately won the media’s attention.

The Religious News Service reported the story, and newspapers across the country printed it. Announcer Nanda-patni-devi dasi was quoted: “We believe we have something to offer that can be enlightening to all people. The overall goal of KHQN is to let the people know what the Hare Krsna movement is about. We’re not recluses.”

KHQN offers a variety of programs. Each day begins at sunrise with a lecture by ISKCON founder-acarya His Divine Grace A.C. Bhaktivedanta Swami Prabhupada, and a new program, lasting thirty-five to forty minutes, is aired every hour. The balance of each hour is filled with music.