An archeological discovery proves that there were
Western devotees of Krsna twenty-two centuries ago.

by Jagatguru Swami and Satyaraja dasa 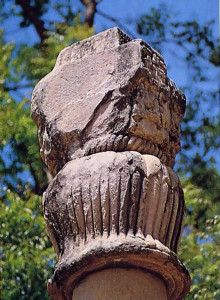 Heliodorus was a Greek ambassador to India in the second century B.C. Few details are known about the diplomatic relations between the Greeks and the Indians in those days, and still less is known about Heliodorus. But the column he erected at Besnagar in central India about 113 B.C. ** (Suvira Jaiswal, The Origin and Development of Vaisnavism (New Delhi: Munshiram Manoharlal, 1980), p. 116.) is considered one of the most important archeological finds on the Indian subcontinent. The column’s inscription has remarkable historical value—for the Krsna consciousness movement and for the world—because it stands as irrefutable evidence that the philosophy of Krsna consciousness had made an impact on Western minds at least twenty-two hundred years ago. 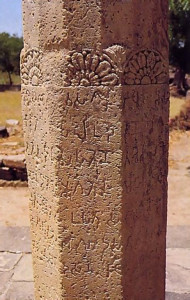 Heliodorus was sent to the court of King Bhagabhadra by Antialkidas, the Greek king of Taxila. The kingdom of Taxila was part of the Bactrian region in northwest India, conquered by Alexander the Great in 325 b.c. By the time of Antialkidas, the area under Greek rule included what is today Afghanistan, Pakistan, and Punjab. ** (A. L. Basham, ed., A Cultural History of India (London: Clarendon Press, 1974), p. 431.)

The column erected by Heliodorus first came to the attention of Western eyes in 1877, during an archeological survey by General Alexander Cunningham. The inscription, however, went unnoticed, because of the pillar’s thick coating of red lead. It had been the custom of pilgrims who had worshiped there to smear the column with vermilion paint. The column, Cunningham deduced from its shape, was from the period of the Imperial Guptas ** (Journal of the Royal Asiatic Society (London: JRAS, Pub., 1909), pp. 1053-54.) (a.d. 300-550). Thirty-two years later, however, when the inscription was brought to light, it became clear that the monument was several centuries older. ** (Ibid.)

In January 1901, a Mr. Lake discerned what he thought was some lettering on the lower part of the column, and removal of some paint proved him right. Dr. J. H. Marshall, who accompanied Mr. Lake, described the discovery in the Journal of the Royal Asiatic Society in 1909. Cunningham, Marshall explained, had been mistaken about the age of the column and “could little have dreamt of the value of the record which he just missed discovering. … A glance at the few letters exposed was all that was needed to show that the column was many centuries earlier than the Gupta era. This was, indeed, a surprise to me, but a far greater one was in store when the opening lines of the inscription came to be read.” ** (Ibid., p. 1054)

A reproduction of the inscription, along with the transliteration and translation of the ancient Brahmi text, is given here as it appeared in the Journal of the Royal Asiatic Society:

“This Garuda-column of Vasudeva (Vishnu), the god of gods, was erected here by Heliodorus, a worshipper of Vishnu, the son of Dion, and an inhabitant of Taxila, who came as Greek ambassador from the Great King Antialkidas to King Kasiputra Bhagabhadra, the Savior, then reigning prosperously in the fourteenth year of his kingship.” 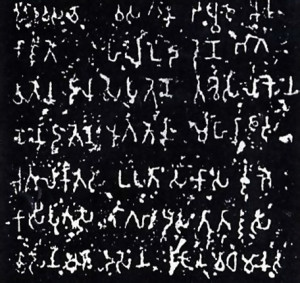 From the inscription it is clear Heliodorus was a Vaisnava, a devotee of Visnu. Vasudeva and Visnu are both popular names of Krsna—the Supreme Personality of Godhead, and Heliodorus’s endorsement of self-restraint (damo), self-sacrifice (chago), and alertness (apramado) further corroborates his status as a devotee of Krsna. Professor Kunja Govinda Goswami of Calcutta University concludes that Heliodorus “was well acquainted with the texts dealing with the Bhagavat [Vaisnava] religion.” ** (Kunja Govinda Goswami, A Study of Vaisnavism (Calcutta: Oriental Book Agency, i956), p. 6.)

To our knowledge, Heliodorus is the earliest Westerner on record to convert to Vaisnavism. But some scholars, most notably A. L. Basham ** (A. L. Basham, The Wonder That Was India, 3rd ed. (Oxford: Taplinger Pub. Co., 1967), p. 60.) and Thomas Hopkins, are of the opinion that Heliodorus was not the only Greek to convert to Krsna consciousness. Hopkins, chairman of the department of religious studies at Franklin and Marshall College, has said, “Heliodorus was presumably not the only foreigner who was converted to Vaisnava devotional practices—although he might have been the only one to erect a column, at least one that is still extant. Certainly there must have been many others.” ** (Steven J. Gelberg, ed.. Hare Krsna Hare Krsna (New York: Grove Press, Inc., 1983), p. 117.)

It is interesting to note that the column has other historical merits. Around the turn of the century, a number of Indologists (Weber, Macnicol, and others) had noted “points of similarity” between the Vaisnava philosophy of unalloyed devotion to Krsna and Christian doctrine. They had argued that devotion to Krsna must have been a perverted offshoot of Christianity, and cited the similarity between stories about Krsna and about Christ to further support their claim. ** (Jaiswal, Op. cit., p. 2.) But the discovery of the inscription on the Heliodorus column laid their speculations to rest. Here was conclusive archeological proof that the Vaisnava tradition antedated Christianity by at least two hundred years.

The column also struck down another erroneous notion. For centuries it was the common belief that India’s orthodox tradition did not accept converts. An Islamic historian, Abu Raihan Alberuni, who went to India in A.D. 1017, tried to explain in his book Indica why the Indian orthodoxy did not admit foreigners. Alberuni suggested that the practice developed only after the Moslem incursion into India, sometime after A.D. 674. ** (Ahmad H. Dani, Alberuni’s India (Lexhore, India: Univ. of Islamabad, 1973), p. 37.) Antagonism between the Moslems and Hindus seems to be the main reason behind the non-conversion practice. For many centuries prior to the Moslem presence, however, there had been no bar to conversion into the orthodox fold, as attested by the Heliodorus column.

Vaisnavism is the path being followed by the members of the International Society for Krishna Consciousness. Western converts are impressed, just as Heliodorus must have been, by the philosophy and practice of Vaisnavism. Ironically, however, misinformed persons try to defame the Krsna consciousness movement and the time-tested tradition that it represents. They try to lump in members of ISKCON with the faddish cults of the day, many of which are known to have questionable practices and motives.

In the face of the historical precedent set by Heliodorus, these accusations leveled against the modern Vaisnavas are clearly unwarranted. The Heliodorus column, erected in honor of Lord Sri Krsna, is proof that the Vaisnava philosophy of devotion to Lord Krsna was winning followers from the West long before its recent inception as the International Society for Krishna Consciousness.