Back to Godhead > ~Featured~ > Ratha-Yatra — A Festival of Spiritual Pleasure

Ratha-Yatra — A Festival of Spiritual Pleasure

The Festival of the Chariots gives us a chance
to cleanse our hearts and advance in self-realization.

A lecture given in London in 1972
by His Divine Grace
A.C. Bhaktivedanta Swami Prabhupada
Founder-Acarya of the International Society for Krishna Consciousness 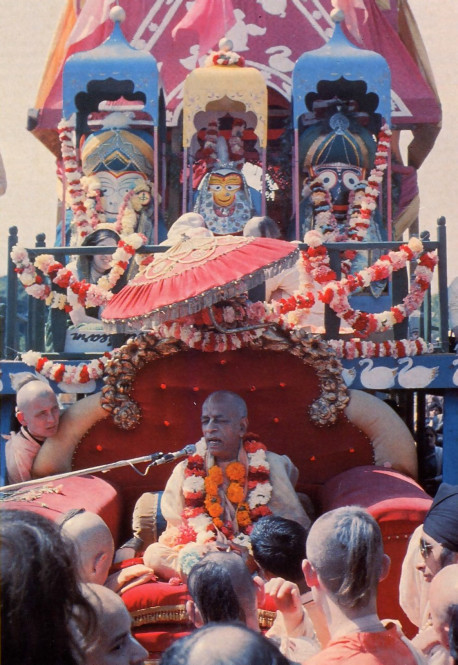 In London in 1972, His Divine Grace A. C. Bhaktivedanta Swami Prabhupada addresses a crowd of devotees and festival-goers at the Festival of the Chariots (see article). Standing majestically above Srila Prabhupada on the towering Ratha-yatra cart are the worship able deity forms of Lord Balarama (Krsna’s brother), Srimati Subhadra (Krsna’s sister), and Lord Jagannatha (Krsna in His form as the “Lord of the Universe”).

Ladies and gentlemen, I thank you very much for coming here and participating in this great movement, known as the Hare Krsna sankirtana movement. This movement was started five hundred years ago by Lord Caitanya Mahaprabhu in India, in the state of West Bengal. His mission was that this Hare Krsna movement, or God consciousness, should be spread all over the world. As many towns and villages as there are on the surface of the globe—He predicted this Hare Krsna movement would be spread to all of them. And His prediction is now being carried out by the International Society for Krishna Consciousness.

In the Vedic literatures it is said, sarvopadhi-vinirmuktam tat-paratvena nirmalam: “When we become free from the false designations pertaining to the body, we become spiritually purified.” At the present moment, on account of our ignorance of the soul, we are thinking of ourselves in relationship with this body. Someone is born in India, so he is thinking, “I am an Indian.” You are born in England, so you are thinking, “I am an Englishman.” Another is thinking, “I am Japanese,” and so on. But actually we are neither Indian nor English nor Japanese. We are spirit souls, part and parcel of God. Knowing that is self-realization. And unless we realize our self, all our activities will lead to problems and defeat.

Everything about self-realization is explained in the Vedic literature, which is summarized in the Vedanta-sutra and also in the Srimad-Bhagavatam. And five thousand years ago, the Lord Himself—Lord Krsna—spoke this transcendental philosophy in the Bhagavad-gita. We are publishing all these literatures, translated into English. If you want to understand this scientific, spiritual movement through philosophical speculation, we have dozens of books for you to read and understand.

Otherwise, you can simply chant the Hare Krsna maha-mantra. It is only sixteen words: Hare Krsna, Hare Krsna, Krsna Krsna, Hare Hare/ Hare Rama, Hare Rama, Rama Rama, Hare Hare. There is no expenditure. If you chant the Hare Krsna mantra, there is no loss on your part, nor are we charging anything. We are distributing this maha-mantra free of charge, and anyone can chant it. There is no difficulty. On the basis of this mantra we are spreading this movement all over the world—not only in your country but in the whole of America, the whole of Canada, and also in Japan, Australia, New Zealand, Africa. Everywhere. We have one hundred branches all over the world.

So our only request is that in whatever condition you may be, please try to chant these sixteen words whenever you have time. And you have the time: you can chant Hare Krsna when you are walking on the street, when you are traveling on the bus, or when you are sitting alone. There is no loss, but the gain is very great. Therefore our only request is that you take up the chanting of this maha-mantra—Hare Krsna, Hare Krsna, Krsna Krsna, Hare Hare/ Hare Rama, Hare Rama, Rama Rama, Hare Hare. And we shall periodically remind you by functions such as the one we are holding today, the Ratha-yatra festival.

This Ratha-yatra festival is very old—at least five thousand years old. Lord Krsna, along with His elder brother, Balarama, and His sister, Subhadra, once rode in a chariot from Dvaraka to Kuruksetra, and this festival commemorates Krsna’s riding with His family on the chariot. This function is held every year in Jagannatha Puri, in India, where it is a great celebration. Now we are introducing this Ratha-yatra festival in the Western countries along with the Hare Krsna movement, because the inaugurator of this movement, Lord Caitanya, took a very active part in this festival. So, we are following in His footsteps. At the same time that it is being observed here in London, it is also being held in San Francisco, Buffalo, Melbourne, Tokyo, Calcutta, and many other places. Taking part in this festival means a step forward for our self-realization. Rathe cagamanam drstva punar janma na vidyate: “Simply by seeing the Lord on the chariot, one makes advancement in stopping the repetition of birth and death.” So I am very glad that you have taken so much trouble to come here. Now please chant the Hare Krsna mantra along with the devotees and take part in honoring prasadam [food offered to Lord Krsna].

Our Hare Krsna movement is standing on three principal things: chanting, dancing, and eating prasadam. It is not very difficult. It is very enjoyable to chant, dance, and take prasadam. And if you like, you can hear a little philosophy of Krsna consciousness. But even if you do not understand the philosophy, or even if you do not read the books, if you simply take part in these three things—chanting Hare Krsna, dancing, and eating prasadam—you will gradually make spiritual advancement. And if you continue this process, then the day will come—even in this lifetime it may come—that you will understand Krsna. Then after leaving this body you go directly back home, back to Godhead. This is stated in the Bhagavad-gita [4.9] by Lord Krsna:

There is another sky, beyond this material sky. That is stated in the Bhagavad-gita: paras tasmat tu bhavo ‘nyo ‘vyakto ‘vyaktat sanatanah. “There is another sky, which is eternal.” This sky is temporary. Your body, my body—everything in this material world is temporary. It has a date of birth, it grows, it stays for some time, it produces some by-products, and then it dwindles and finally vanishes. That is the material nature. But there is another nature, which is spiritual. And even when everything is annihilated here, that nature stands.

Therefore this movement is very important, because we are trying to teach people how to transfer from this world of darkness to the world of light, which is called Goloka Vrndavana. So I am very much thankful to you for giving me your time. We have many books, and our devotees will be happy to answer any of your questions. Please take advantage of this opportunity and make your life successful.

One Response to Ratha-Yatra — A Festival of Spiritual Pleasure