Back to Godhead > Prabhupada > A Less-Than-Doggish Civilization 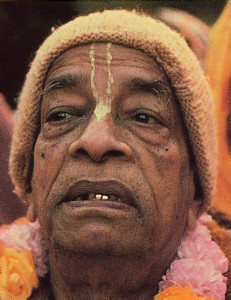 The following conversation between His Divine Grace A.C. Bhaktivedanta Swami Prabhupada and some of his disciples took place in July 1975 on an early-morning walk in San Francisco.

Devotee: Srila Prabhupada, one of the scientists who invented the hydrogen bomb was lamenting recently that young people are not so interested in science anymore.

Srila Prabhupada: Yes. The scientists cannot solve the problems of birth and death. So the young people are becoming saner. “What is the use of wasting our time in this way?” they think. “Science cannot solve any real problems.” That is good sense. Is this professor still alive?

Srila Prabhupada: So ask him to invent some bomb that will prevent death. Tell him, “People are already dying, and you have invented something to make them die wholesale. Now invent something that people can take so they’ll never have to die. Can you do that? No? Then we are no longer interested in your science.”

Go to this professor and tell him, “You are regretting that we young men are no longer interested in science. This is the reason: Since when we die everything will be finished, what is the use of studying your science? You have not improved anything. The animals are taking birth and dying, and we are also taking birth and dying. What is the essential difference? So your science is all false propaganda. We are no longer interested.”

Devotee: In Los Angeles you said that in twenty-five years science will be finished.

Devotee: Even the rats do that.

Srila Prabhupada: Yes, a mother’s affection for her child is natural. But now the so-called civilized mothers are killing their children. This is your civilization. And this is your religion, your science, your philosophy—everything. This “civilization” is finished unless people take to Krsna consciousness.

[Pointing to pine cones on the ground] What are these?

Devotee: These are pine cones, Srila Prabhupada. They are the seeds of the pine tree.

Srila Prabhupada: Let’s see the scientists produce one seed like that. Where is the scientist who can do that? Millions of living beings are born every second, yet they are trying for years together to manufacture one living being in the laboratory and take credit for creating life. What is their credit, even if they succeed? Already millions and trillions of living beings are being born every day. These scientists who try to create life are fools, and the people they are fooling are also fools.

Devotee: They say they can explain creation without God. They say everything has come from Mother Nature.

Srila Prabhupada: But without a father, can a woman give birth? Where is the father? Ask these rascal scientists this question.

Devotee: Sometimes they say that God is now dead.

Devotee: Nature has created everything on her own. Originally things began by some chance combination of atoms and molecules.

Srila Prabhupada: Anyone who says this creation began by chance is a rascal. Nothing takes place by chance. The answer is in the Bhagavad-gita, where Krsna says, bijam mam sarva-bhutanam: “I am the original seed of all existences.” Challenge these rascals. They’re cheating so many people.

Devotee: Now the scientists are studying the atom, Srila Prabhupada, and they agree—

Srila Prabhupada: First of all let us know what good they have actually done. They are proposing so much nonsense—that nature is working independently, that human beings have descended from the apes—but have they released us from the clutches of the material nature? Even if you accept that there is no God and that nature is supreme, you are still subordinate. You are not independent. This is also explained in the Bhagavad-gita [3.27]: “Everything is going on by the control of Krsna’s material energy, but those who are fools and rascals think that they are independently doing everything.” Why are you thinking you are independent? The material nature is pulling you by the ear: “Come here!” You cannot say, “I will not become an old man. I’ll not die.” You must become old and die. Even if you accept only the existence of nature but not God, you still must accept nature’s authority. Where is your independence?

Devotee: That is why they’re engaged in science—to master nature.

Srila Prabhupada: That is another foolishness. And we shall be misled by these rascals? They promise everything for the future. “Yes, in the future we’ll do this. In the future we’ll do that.” Postdated check. “I’ll give you a million-dollar check dated six months from now. Take it.” Only the fool will be satisfied: “Now I am rich.”

Devotee: So the check from the scientist returns stamped “Insufficient Funds.”

One Response to A Less-Than-Doggish Civilization