Back to Godhead > ~Featured~ > Krishna is God, Even on the Lap of His Mother

Krishna is God, Even on the Lap of His Mother

As a child, as lover, as warrior, as creator—
Lord Krsna is always the Supreme.
But how do we express our feelings for Him?

A lecture by
His Divine Grace A.C. Bhaktivedanta Swami Prabhupada
Founder-Acarya of the International Society for Krishna Consciousness 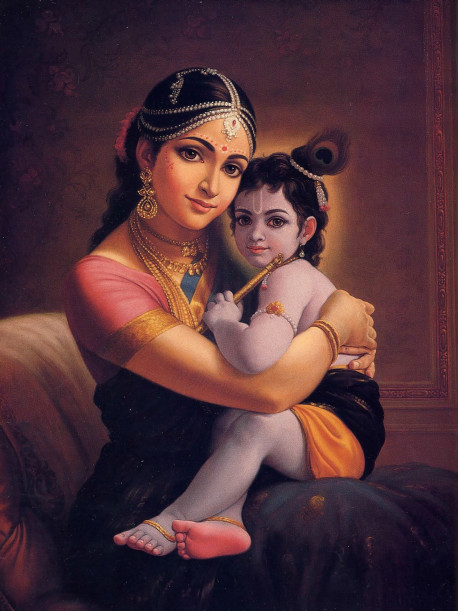 “Although I was born in a demonic family. I may without a doubt offer prayers to the Lord with full endeavor, as far as my intelligence allows. Anyone who has been forced by ignorance to enter the material world may be purified of material life if he offers prayers to the Lord and hears His glories.” (Srimad-Bhagavatam 7.9.12)

Here Prahlada Maharaja is showing us that to offer prayers to the Supreme Personality of Godhead you don’t require any high qualification. You can offer your prayers from any standard of life. It is not that you have to become a very learned and scholarly man so you can present your prayers in nicely selected words with poetry, rhetoric, metaphor, and so on. No, that is not required. You simply have to express your real feelings.

What are those real feelings? First we must become aware of our actual position, then we can express our feelings sincerely and spontaneously. Caitanya Mahaprabhu* [*Caitanya Mahaprabhu is Krsna Himself in the role of His own devotee. He appeared in Bengal. India, five hundred years ago to teach love of God through the chanting of the Hare Krsna mantra] teaches us how to pray with proper feeling. He prays,

Lord Caitanya particularly addresses the Lord as Jagadisa, Lord of the universe. (Jagat means “universe,” and isa means “Lord.”) Whether you are Hindu or Moslem or Christian or whatever, you must know that there is a supreme controller of this universe. How can you deny it? Therefore this word jagadisa has been used very appropriately by Caitanya Mahaprabhu, and His prayer is universal.

Everyone of us is a controller to some extent. If somebody has nothing to control, he keeps a cat or dog to control. “My dear cat, please come here.” The man is thinking, “I am the controller.” And sometimes we find that the dog controls the master. Actually, however, nobody in this world is a controller; everyone is controlled. But due to maya, or illusion, we forget our real situation and refuse to accept that there is a supreme controller of this universe. We know that as soon as we accept some controller we’ll have to account for our sinful activities, just as when there is a government we are responsible for our unlawful activities. But because we want to continue our sinful activities, we deny that there is any supreme controller. This is the basic principle of godlessness. Why do these rascals deny that there is God? Why do they say God is dead Because they want to continue their rascaldom without any restriction.

But do you think that simply by denying God, He will die and then there will be no God? No. In this connection there is a Bengali proverb about the vulture. Vultures want some dead carcass—especially a cow. Once, for days together, a vulture was not getting anything to eat. So it cursed some cow: “You die!” But simply by the vulture’s cursing did the cow have to die? No. Similarly, the atheist wants to see God dead, and he takes pleasure in saying, “Now God is dead. I can do any nonsense I like.” This is going on—the vulture is cursing the cow.

As already explained, Jagadisa, the supreme controller, is Krsna (isvarah paramah krsnah). There are many controllers, but nobody except Krsna is the supreme controller. That is not possible. By individual effort, by national effort, by communal effort, everyone is trying to become the supreme controller. So there is competition. But no one can possibly become the Supreme, because this creation is made in such a way that no one is supreme but Krsna. In whatever position you place yourself, you’ll eventually find someone superior to you. No one can say, “I am eternally superior.” No. If you think you are superior, one day you’ll find somebody superior to you. This is our position.

And what is God’s position? His position is described in the Vedic literature as asamordhva, which means that no one is superior to Him and no one is equal to Him. In other words, when you find someone who has no equal and no superior, He is God. This is the Vedic conclusion.

In the Upanisads there is a similar statement: na tat-samas cabhyadhikas ca drsyate. “No one is equal to God or greater than Him.” Then, parasya saktir vividhaiva sruyate: “His energies are manifested in so many ways.” And also, na tasya karyam karanam ca vidyate: “He doesn’t have to do anything.” Take any important man—your President Johnson, for example. The President of the United States is considered the supreme man in America, but as soon as there was some disturbance in central Europe, he had to call meetings of his Cabinet and consider how to deal with the situation. He had to do something. If he did not do anything, people would no longer have considered him the supreme man.

But in the Vedic literature we find the statement that God doesn’t have to do anything. That is superiority. If He had to do something, He wouldn’t be supreme. In this connection, you’ll be interested to know that once a European gentleman went to Calcutta and visited several temples there. First he went to the temple of the goddess Kali. He saw Kali’s ferocious features—she had a chopper in her hand, and she was chopping off the heads of the demons. She was wearing a garland made of the demons’ heads. Then he went to several other temples, and finally he came to our temple—a temple of Radha-Krsna. So, he was an intelligent man, and he said, “In this temple I have found God.” Why did he conclude that? “In every other temple I saw that the god, the deity, was performing some duty. But here I see the Deity is simply enjoying; He has nothing He must do.” This is a very nice conclusion, and it is also the Vedic conclusion.

Nowadays many fools are supposedly becoming God by meditation. But can one become God by meditation? Do you think a dog can meditate and become God? This is all nonsense. God is God! He is always God. Even in the lap of His mother, Krsna is God. Once a demonic woman named Putana came to poison baby Krsna. She was wearing a beautiful dress, and she asked Krsna’s mother, Yasoda, “Yasodamayi, you have a very nice baby. Will you kindly give Him to me so I can offer Him my breast?” Yasodamayi was a simple village woman, so she answered, “Yes, you can take my child.” But Putana had smeared poison on her breast. “As soon as Krsna sucks my breast,” she thought, “He will die.”

This is the demonic spirit. The demons always want to kill Krsna. That’s all. They say, “God is dead” or “There is no God” or “God is impersonal.” In other words, they want to see Krsna killed. That is their business. The demon Kamsa was always thinking, “As soon as Krsna will take His birth, I’ll kill Him.” But God is always God, even as a little baby. So when the demoness Putana took the child on her lap and allowed Him to suck her breast, Krsna was so kind that He not only sucked her breast but He sucked out her life also. And then she appeared in her real form as a great, gigantic demoness.

So, in the lap of His mother Krsna is still God. He did not become God by meditation, by penance, by austerity, or by following some rules and regulations. He’s eternally God. He doesn’t have to do anything to become God. If someone claims that he has to do something and then he will become God, he’s not God. He’s a dog. You should immediately understand this. If somebody advertises that by meditation or yoga he has become God, or that by worshiping such-and-such deity he has become God, immediately know that he is a dog.

So, there is no difficulty in understanding God—simply try to understand Krsna. As Brahma says, isvarah paramah krsnah: “The Supreme Lord, the Supreme Personality of Godhead, is Krsna.” And in the Bhagavad-gita Krsna Himself says, mattah parataram nanyat kincid asti dhananjaya: “My dear Arjuna, O Dhananjaya, there is nothing superior to Me.” In another place Krsna says, aham sarvasya prabhavah: “I am the origin, the fountainhead, of everything. “This means He’s the origin of Siva, the origin of Visnu, and the origin of Brahma, what to speak of other living entities.

Here Sri Prahlada Maharaja says, isvarasya . . . mahi grnami: “I shall glorify the Lord.” Prahlada is only five. How could he glorify the Lord? He says, yatha manisam: “It doesn’t matter that I am a child. In whatever way I can, I shall express my feelings.” If we can simply say, “O God, O Lord, You are so great,” that is all right. After all, how can you describe or understand God’s glories? It is not possible, because He’s unlimited. But despite any limitations you may have, if you express yourself feelingly—”My Lord!”—that will be accepted.

Caitanya Mahaprabhu is also teaching us how to pray feelingly, without any personal interest. Everyone is praying to God with some personal interest: “Give me some money. Give me some relief. Give me a nice house, a nice wife, nice food.” That is good, but not as good as if you pray to God as Caitanya Mahaprabhu does: “I don’t want any money. I don’t want any number of followers. I don’t want a beautiful wife.” Then what does He want? “I want to serve You, That’s all.” This is the best prayer. “My Lord, You are so good, You are so great; all I want is to be engaged in Your service, birth after birth. I have been serving rascals, but they have not become satisfied and I have not become satisfied. Now I have come to You. Please engage me in Your service.” This is the last word in prayer.