Back to Godhead > Society > Religion > When God Takes Sides

In former times Lord Krsna would personally participate in the cosmic struggle between good and evil. What can He do in these days of moral ambiguity? 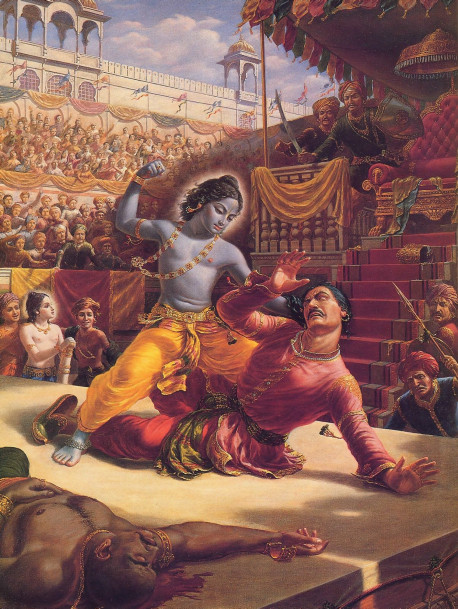 The powerful tyrant, Kamsa, was as vile as they come. After usurping the throne from his father and killing and imprisoning many of his own relatives, he turned on his chief rival, Lord Krsna. Kamsa feared Krsna and wanted Him dead. But he didn’t realize his mortal enemy was the immortal Supreme Personality of Godhead, the protector of pure-hearted devotees and annihilator of miscreants.

These days most people think it simple-minded to see the world as an arena where the forces of good contest the forces of evil. We no longer view things in black and white but shades of grey; we have become used to moral ambiguity, and for good reasons, we are wary of the claim that “God is on our side.” When Reagan called the Soviet Union an “evil empire,” I was not alone in feeling uneasy—uneasy not because I like Russia, but because Reagan seemed far too unaware that the United States has not been, by contrast, all sweetness and light.

Indeed, our modern world more and more seems to be a bleak place where evil simply battles evil, a place of furious struggles where the victory of any party is a disaster. True, people are a mixture of good and bad, but somehow the mechanisms of modern civilization increasingly seem to subvert the good and employ it for vile ends. Consider Albert Einstein’s desire to plumb nature’s truths—which to him meant understanding the mind of God. How did it happen that such a pristine urge resulted in the most demonic weapons of war? And this was facilitated by leaders who sincerely wanted nothing but peace.

Under the circumstances, our longing for the moral simplicity of unambiguous good contesting an equally unambiguous evil is understandable. I’m sure such a longing contributed to the vast popularity of the Star Wars films. Of course, we seek in fantasy what we don’t find in reality. Yet I am convinced that this paradigm of the contest between good and evil is much more than a fantasy, much more than an expression of nostalgia for a lost political innocence. It reflects, rather, a basic feature of the real world, and one we still need to attend to.

This is how the Vedic sage Vyasa saw it. When he relates in the Srimad-Bhagavatam the histories of Krsna’s various appearances in this world in ages long past, the pattern clearly emerges. On the side of the good we have the suras, the godly, and on the opposite side the asuras, the ungodly; and a great cosmic contest between these two parties has been seething since the beginning of the universe.

The suras, according to this account, are servants of God, devoted to furthering God’s purpose in the world. God created the world for the reclamation of the fallen souls, who meet with repeated birth and death as they transmigrate through various species of life. When a soul is at last promoted to a human birth, he has a chance to become free from this round of birth and death altogether and return to the kingdom of God for an eternal life of perfect knowledge and bliss. Such freedom comes by properly developing the full consciousness characteristic of the human form. This developed consciousness, which permanently ends all material miseries, is called Krsna consciousness. A Krsna conscious person no longer wrongly identifies himself with his material body, having directly realized his own nature as an eternal spiritual being, and he uses his mind and senses solely to satisfy God. Without Krsna consciousness, we misidentify ourselves with the material body, as animals do, and, like animals, we act merely to satisfy material desire. And because we have failed to realize our human potential, we remain interred in the world of the dying.

The principal task of the suras is to maintain the normative form of human civilization, established by God, that nurtures Krsna consciousness. The standard books of knowledge of such a civilization, teaching the science of self-realization, are the Vedic literatures. Where there is no Vedic culture, no one is released from birth and death, and God’s purpose in creating the world is frustrated.

The asuras, in contrast, labor under the profound misconception that happiness can be achieved not by self-realization but by sense gratification. While the suras, under Vedic direction, engage all natural and human resources in the service of God, the demonic asuras use God’s property for their own enjoyment. In their hands, science becomes a tool to subjugate and control all resources systematically; thus their aim is to usurp the position of God Himself. They are naturally opposed to the stewardship of the Lord’s representatives, and so try to depose the suras time and again.

In the days when a well-established Vedic civilization would be assaulted by the asuras, there was an unambiguous struggle between good and evil. Since suras are inherently humble and meek and asuras ruthless and brutally efficient, in the natural course of events the suras would have been unfailingly crushed. But they were not, because time and again their supernatural ally and ultimate protector—God Himself—would intervene and reverse the course of events. Just as from the friction between two sticks of wood, fire appears, so from the friction between suras and asuras, God appears. Krsna states in Bhagavad-gita (4.7-8) the reason for His occasional descents: “Whenever and wherever there is a decline in religious practice . . . and a predominant rise of irreligion—at that time I descend Myself. To deliver the pious and to annihilate the miscreants, as well as to establish the principles of religion, I Myself appear millennium after millennium.

At the time Krsna appeared and spoke the Bhagavad-gita, the whole world had been oppressed by an alliance of asuras, who had siezed political power and had built up huge military forces. The head of this demonic alliance was an unscrupulous tyrant named Kamsa. Krsna took birth as Kamsa’s own nephew, and when Kamsa received prophetic warning that one of his sister’s children would eventually kill him, he imprisoned his sister and her husband and killed her children as soon as they were born, one by one. But Krsna escaped and was hidden away to grow up in the country among cowherds.

At the age of sixteen, however, Krsna deliberately walked into a trap set for Him by Kamsa, a wrestling match Kamsa had arranged in his capital. This was not the sporting event it seemed; the wrestlers were trained killers with orders to slay the youthful Krsna. But Krsna vanquished the bone-crushers and then, dragging the astonished tyrant from his throne, slew him with a single blow. Thereafter, as a ksatriya, a member of the royal order, Krsna defeated Kamsa’s allies in battle, one after another, thus ridding the world of its violent and unholy oppressors.

While some love God and others hate Him, God Himself is ultimately impartial and equally beneficent to all. Because He is a person. He responds according to the way we approach Him, and thus He is perceived as amiable or inimical. Yet those like Kamsa, whom Krsna slays, are liberated by virtue of their direct contact with the all-auspicious Personality of Godhead. Thus a victory by Krsna is a victory for everyone—sura and asura alike.

In these rough times, we no longer see the clear-cut distinction between sura and asura. The gradual triumph of secular culture and the erosion of spiritual values has affected nearly everyone. The godly tendency in people is baffled by lack of encouragement and direction and is co-opted by the institutions of a materialistic culture. Even religion has been subverted, for it usually tries to persuade God to gratify our desires, rather than to teach us to satisfy His; it aims at enlisting God on our side rather than at showing us how to be on His. Stevenson’s parable claimed that a bestial Mr. Hyde is hidden—as the name suggests—in every Dr. Jekyll, but now it seems that Mr. Hyde is on the loose, and the good doctor doesn’t know how to get out.

Most of us are innocent, but because of the detrimental effects of this age, we act like asuras, simply because we don’t know of any alternative. If Krsna were to act now just as He did in former times, coming with bow or sword or ax to destroy the asuras, we would all be liable to His chastisement. Therefore, when Krsna appeared five hundred years ago as Lord Caitanya to reinact His historic mission for our own age, His divine weapon was the Hare Krsna mantra. This weapon destroys the demonic mentality. Even though this mentality has infected practically everyone, those who are basically godly will be attracted by the chanting of Hare Krsna, and it will purify their consciousness of all asuric imposition. Thus Vedic culture will gradually be reestablished all over the world for the salvation of all living beings.

If things go on as they have been, however, there will finally be no real contrast between godless communism and godless capitalism; both sides will be guided entirely by asuric interests. Even now, both sides are locked into the deployment of increasingly terrifying weapons, a situation anticipated by Krsna, who said that asuras characteristically “engage in unbeneficial, horrible works meant to destroy the world” (Bg. 16.9). But we are fortunate to be living in the era of Lord Caitanya, who offers us an alternative. Because of that, we may look forward to the fulfillment of the poet W. B. Yeats’s prophetic words concerning modern man:

Now his wars on God begin;
At stroke of midnight God shall win.