Back to Godhead > ~Featured~ > Festival of the Chariots USA

Festival of the Chariots USA

Here comes the Lord of the Universe—
and the chance of a lifetime . . . 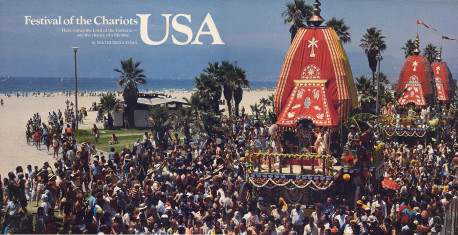 With penants flying in the Pacific breeze, colorful chariots dominate the parade along Venice Beach in Los Angeles. 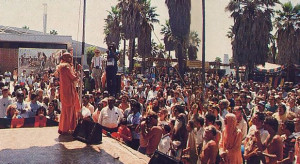 Srila Ramesvara Swami, coordinator of the L. A . celebration, addresses the crowd on the science of God consciousness and the significance of Ratha-yatra.

The three towering chariots, their brightly colored silk canopies billowing, glide slowly down streets that on every other day of the year are reserved for a heavy traffic of cars, trucks, and buses. The chariots proceed in single file, a colorful, majestic caravan. Before each chariot, young men in white and saffron robes play double-headed drums and brass hand-cymbals, leading the crowd in dancing and in a loud, uproarious chant: Hare Krsna, Hare Krsna, Krsna Krsna, Hare Hare/ Hare Rama, Hare Rama, Rama Rama, Hare Hare. 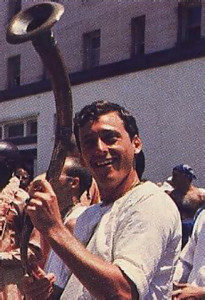 A happy celebrant gets into the spirit with as mile and blasts from an Indian horn.

The seven-foot-high wheels roll forward as men, women, and children tug the chariots’ thick ropes and look back over their shoulders at the mountainous vehicles. Hindu businessmen are there with their wives, their children, and even their mothers, earnestly straining at the task. Locals and out-of-towners alike join in. Some have come hundreds of miles to take part in the festival.

On the sidelines, onlookers watch the joyous spectacle. Some faces, set with indifference a few minutes before, now break into big grins. Others look puzzled. People are wondering, “What’s going on? Where did those big carts come from? Why the tumult?”

In case you’re among the puzzled, the celebration is called Ratha-yatra, the Festival of the Chariots, a religious festival observed annually for thousands of years in India. This festival commemorates one of the pastimes of Lord Sri Krsna, the Supreme Personality of Godhead, during His appearance on earth five thousand years ago. Although Lord Krsna is the origin of the entire cosmos, He regularly appears within it, playing the part of a human being, while at the same time exhibiting the powers and opulences of His supreme position. The purpose of His pastimes on earth is to reestablish the essence of all religious principles—unalloyed love for God. 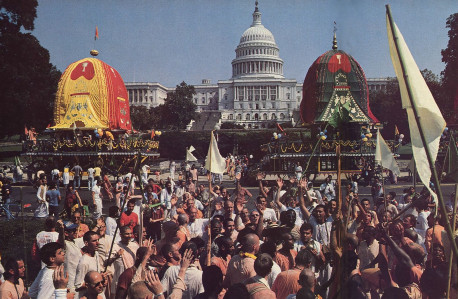 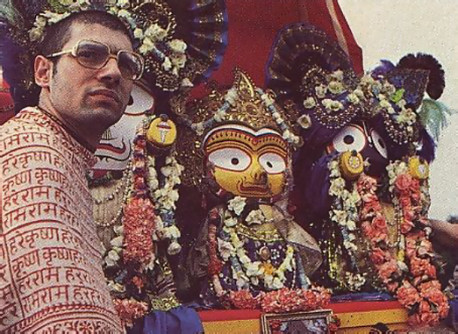 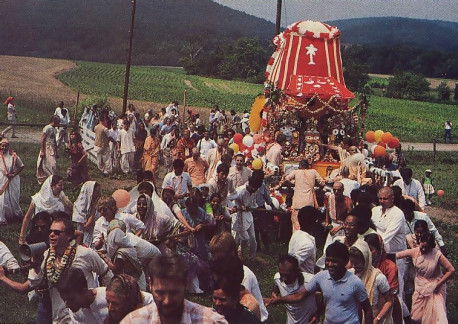 Devotees pull the chariot at ISKCON’s farm in Pennsylvania. 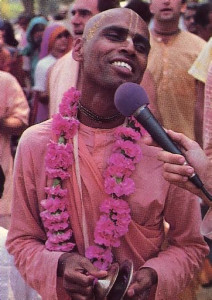 Leading the chanting on Capitol Mall is His Holiness Lokanatha Swami

During His earthly pastimes fifty centuries ago, Lord Krsna, accompanied by His brother Balarama and sister Subhadra, visited Kuruksetra, a holy site in north central India. There Lord Krsna met with His friends and relatives from Vrndavana, who dearly wanted Him to return with them to Vrndavana, Krsna’s childhood home. The feelings of love for Krsna expressed by the residents of Vrndavana is the theme of the Festival of the Chariots. “Ratha-yatra,” Srila Prabhupada writes, “is the emotional process of taking Krsna back to Vrndavana.” 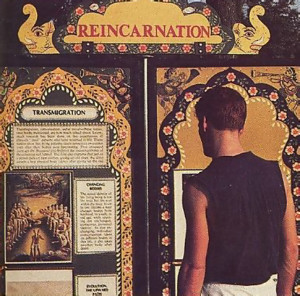 An exhibit on reincarnation at the D.C. festival depicts the soul’s evolution from one species to another.

The Ratha-yatra festival, therefore, gives everyone a chance to remember and to celebrate Krsna’s pastimes. The deity forms of Jagannatha (Krsna), Balarama, and Subhadra, who ride upon the three chariots in the Ratha-yatra parade, were carved in memory of Krsna’s Kuruksetra visit. Although these forms are made of wood, they are not idols—false or imaginary objects of worship—but are authorized incarnations of the Absolute Truth, who consents to appear in such forms at the request of His pure devotees. Enthusiastic participants in the Festival of the Chariots experience a blissful transcendental reciprocation with the Supreme Personality of Godhead, Krsna, in these deity forms. According to the Bhavisya Purana, whoever joins in the Ratha-yatra parade and festival will be elevated to the kingdom of God. 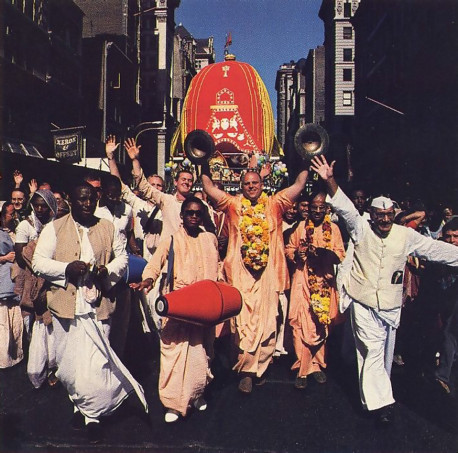 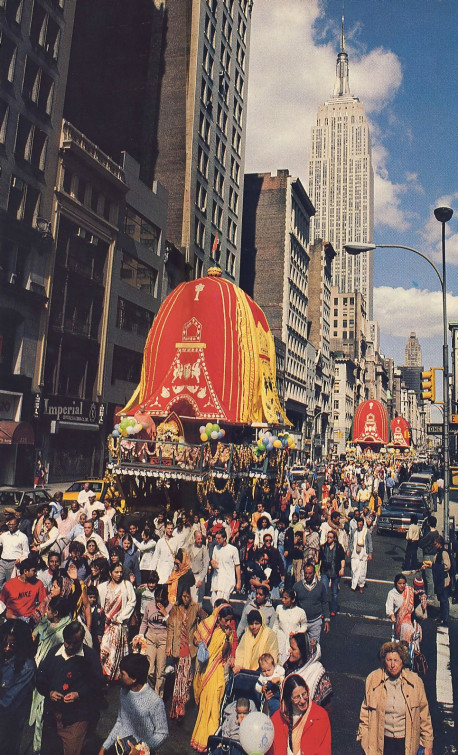 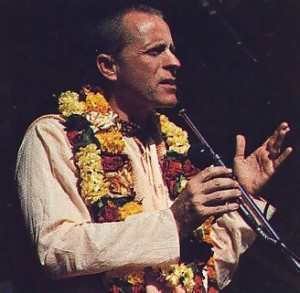 His Divine Grace A.C. Bhaktivedanta Swami Prabhupada introduced Ratha-yatra to the West in 1968 in San Francisco. Since then the festival has spread to many cities in the United States, South America, Europe, Australia—and even India, where ISKCON Ratha-yatra festivals have given new life to the ancient tradition. 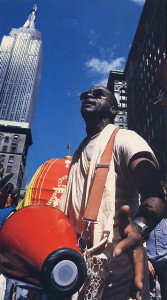 ISKCON devotees take pleasure in the months of planning and hard work that go into making the festivals a success. They understand that, of all welfare activities, the distribution of Krsna consciousness is the most beneficial for everyone. A plate of ordinary food may help the hungry, and ordinary singing and dancing may cheer the sullen, but tasting food offered to Krsna and singing and dancing in glorification of Him is transcendental and gradually delivers one from all distress.

Last summer and fall, ISKCON devotees in North America staged major Ratha-yatra festivals in Washington, D.C., Los Angeles, New York, Boston, and Vancouver. At the end of each parade the carts rolled into festival sites, where the devotees entertained thousands of guests with transcendental music, lectures, exhibits on reincarnation and Vedic culture, and continuous vegetarian feasting. 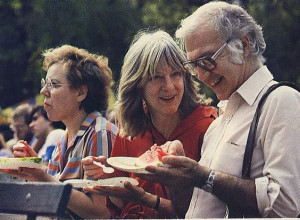 Festival-goers enjoy watermelon in the park and live entertainment onstage.

The Ratha-yatra festivals now appearing annually in cities around the world are a unique opportunity for all of us. More than occasions for mere merrymaking, the offer us the chance to glorify and celebrate the pastimes of the Supreme Lord and to develop our dormant Krsna consciousness. So the next time you see those huge, colorful chariots rolling down the street, surrounded by singing, dancing crowds—join in! It’s the chance of a lifetime.