Back to Godhead > ISKCON > News > New Temple for ISKCON Vancouver 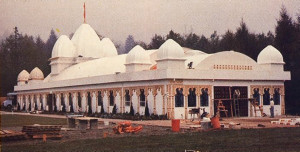 ISKCON Vancouver’s new temple will be the heart of a spiritual and cultural oasis in British Columbia.

The temple is on an eight-acre plot in the quiet suburb of Burnaby, a thirty-minute drive from downtown Vancouver. Since 1978, when the devotees acquired the property, they had wanted to build a temple. But not until a year and a half ago, when architects Om and Jyoti Sharma began lending a hand, did the project really get going. The Sharmas, a husband-and-wife team who had come to Vancouver from India, felt inspired to help the devotees build a temple for Lord Krsna.

With the help of the Sharmas and under the direction of Bahudaka dasa, leader of the Vancouver ISKCON center, the pace of the construction began to quicken last January. But a sinking foundation seemed to threaten the projected opening date—August 31, Lord Krsna’s birthday.

Srila Gopala Krsna Goswami Bhagavatapada, one of the present spiritual masters in ISKCON and director for ISKCON’s affairs in Canada, commented: “This Vancouver property is a gem—only a short ride from the city, but in a country atmosphere. It was imperative that we construct a beautiful palace for Sri Sri Radha-Madana-mohana, which would make this facility complete and a wonderful beacon of Krsna consciousness. It had to be finished.”

Yet with only three weeks left, the goal seemed out of reach. All the stained-glass panes and ornately decorated mirrors just couldn’t be completed on time—or so it seemed. As for the 2,400-square-foot marble floor, Dharmarupa dasa reported, “Every professional floor-layer said it wasn’t possible. But every day for the last ten days our all-devotee floor crew worked from 6 a.m. to 2 a.m. the next morning, and they got the job done. At the opening, one of the professionals who had laughed earlier was amazed. He said we’d performed a miracle.” Another miracle happened when the landscaping crew turned the dusty, untidy terrain into orderly lawns and walkways. In one night they laid a football field’s worth of turf. And as for the sinking of the foundation—it stopped.

The grand opening, advertised all over the city, attracted six thousand guests. Burnaby’s mayor, William Le Warne, was there, along with “the Right Honorable Svend Robinson, of the Canadian parliament. Mr. Bimala K. Mitra, the Indian consul general, and the Honorable Elwood Veitch, of British Columbia’s legislative assembly, also attended.

The festivities included chanting, plays, and a sumptuous feast of krsna-prasadam (food offered to Krsna). Adding to the evening’s highlights, a helicopter flew over the grounds and showered the petals of ten thousand flowers upon the celebrants. Finally, at midnight, the fountains were turned on and the curtains opened to reveal Sri Sri Radha-Madana-mohana on Their shimmering new altar.

Mr. Robinson summed up the collective sentiment during his address: “This palace is a hidden gem in our community. It is a beautiful building. But there is another beauty that transcends its beauty, and that is the rich spiritual beauty of this community of devotees. The peace and harmony that form the basis of the Vedic teachings must, I believe, be spread throughout our community. And I feel that God consciousness, as exemplified in this temple, will spread throughout the land.”

The devotees of the Vancouver ISKCON center have drawn up plans for a vegetarian restaurant and a museum, which will complement the temple and create a cultural and spiritual oasis for British Columbians. 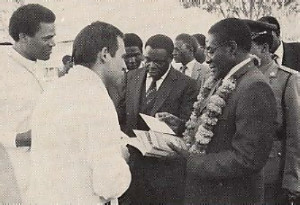 Kadoma, Zimbabwe—Prime Minister R. G. Mugabe, while visiting the annual Kadoma Agricultural Show. received several volumes of Srila Prabhupada’s books from Hare Krsna devotees. The prime minister had just addressed a large gathering and was touring the exhibits, when devotees garlanded him and then presented him with Srila Prabhupada’s Bhagavad-gita As It Is, The Science of Self-Realization, and several other books. Devotees also gave the prime minister a letter of commendation and offered assistance in solving problems among the nation’s youth. At the Harare Agricultural Show, a week later, Zimbabwe’s president, the Honorable C. S. Banana, also received a set of Srila Prabhupada’s books.

Subhananda dasa (in white robes) and his wife Sitarani-devi dasi (to his right) join with some important WCC delegates and official guests at ISKCON’s center in Vancouver, British Columbia.

Vancouver—Recently, ISKCON’s director for interreligious affairs, Subhananda dasa, attended the Sixth Assembly of the World Council of Churches at the University of British Columbia. The WCC, which meets only once every seven or eight years, is the world’s largest international federation of Christian churches, representing most Protestant and Orthodox denominations, which together claim 400 million members. Its three hundred affiliated church organizations come from more than one hundred countries.

As a representative of ISKCON, Subhananda attended many plenary sessions, interreligious symposia, and related ecclesiastical and cultural events along with members of the official Hindu delegation. Subhananda dialogued with church leaders and other delegates from all over the world, including the Reverend Robert Runcie, Archbishop of Canterbury and spiritual leader of the world’s 70 million Anglicans. Noticing that Subhananda’s wife, Sitarani-devi dasi, was a native of Great Britain, the Archbishop inquired how the Hare Krsna movement was faring in England. Sitarani explained that the English—perhaps due to England’s strong historical ties to India—tend to accept Hare Krsna devotees more than people of some other Western countries. The Archbishop spoke of the sincerity of Western Krsna devotees and gratefully accepted a copy of Subhananda’s recent book, Hare Krishna, Hare Krishna: Five Distinguished Scholars on the Krishna Movement in the West.

One of the most important of a series of events held in conjunction with the WCC assembly was a special interfaith gathering at the local ISKCON community in Burnaby, British Columbia, attended by thirty prominent representatives of non-Christian faiths—official guests of the WCC—along with a number of important Christian delegates.

Among Western Christian guests were Mrs. Pauline Webb, a former member of the Central Committee of the WCC and coordinator of overseas religious programming for the BBC (Mrs. Webb delivered the keynote address for the Sixth Assembly); Reverend Marcus Braybrooke, chairman of the World Congress of Faiths and co-editor of World Faiths Insight; and Dr. John Berthrong, associate secretary for interfaith dialogue for the United Church of Canada.

Other Christians were Reverend Dr. M. M. Thomas of South India, former Chairman of the central committee of the WCC, director for twenty years of the Institute for Religion and Society in Bangalore, India, and currently part-time professor of social ethics at Princeton Theological Seminary; Reverend Sushil Adhikary, president of the Bangladesh Baptist Sangha; and Reverend Samuel Ngcobo, general secretary of the Reformed Presbyterian Church of Southern Africa. 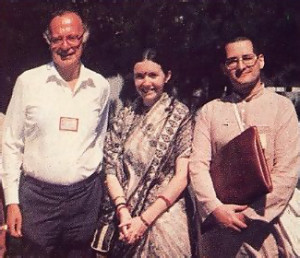 The Reverend Robert Runcie, Archbishop of Canterbury, with ISKCON’s director of interreligious affairs, Subhananda dasa, and his wife, Sitarani-devi dasi.

The guests toured ISKCON Vancouver’s beautiful new Radha-Krsna temple, participated in a worship ceremony, and viewed the award-winning film Vrndavana, Land of Krsna. After the film, all partook of a twelve-course, gourmet Indian vegetarian feast and enjoyed the warm, festive atmosphere of the community. Many of the delegates expressed appreciation for the opportunity to learn more about the Krsna consciousness movement and praised the industriousness and devotion of the local community members. Each guest received complimentary copies of various ISKCON publications and a copy of Hare Krishna, Hare Krishna.

As Subhananda dasa, who convened and hosted the event, later remarked, “Almost every one of the guests commented to me or to one of the other devotees present how pleased they were to have had the chance to see the Hare Krsna movement close up and to witness its authenticity and vitality. Many of them promised, as religious leaders, to convey their impressions to their own religious communities around the world.”