Back to Godhead > Devotees > Preaching > In India > On Pilgrimage 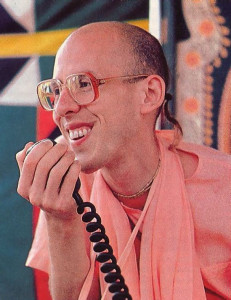 Traveling north from Kanya-kumari, in a few days we come to the village of Tirukkurungudi, once visited by Sri Caitanya Mahaprabhu nearly five hundred years ago.

It lies at the foot of Mahendra Giri, a large mountain, historically a place of spiritual significance, now perhaps better known for the Mahendra Giri Liquid Propulsion Research Center, a link in India’s space program.

From the previous village, Tirukkurungudi lies about fifteen kilometers north on an otherwise dry, desolate stretch of Tamil Nadu state highway. It is a village of about seven thousand people, most of them poor, though we are received by cultured, well-educated brahmanas of the Ramanuja sect. Several speak excellent English.

The temple, the only large structure in the village, is unexpectedly grand. The outer walls, solid stone, must be twenty feet high. The inner walls and the gopuram (tower) bear fine, though time-worn, carvings. Inside we find ourselves walking through corridors lined by hundreds of ornately carved pillars, taller than our heads yet each cut from a single stone.

In the sanctuary the Deity of Narayana, the Personality of Godhead, smiles with deep beauty and benevolent grace. The brahmanas here serve Him with devotion, carrying out the daily ceremonies in accord with ancient Vedic traditions.

Yet the worship in the morning begins at 6:30, not the usual 3:30 or 4:30. “We have some problems,” our brahmana guide admits. The village has dwindled, and so has interest in the temple—and funds to maintain it.

The temple’s imposing scale and its profusion of vivid artistry can only have been the work of powerful, resourceful people living in splendid prosperity, their temple and God in the center. A far cry from the poor, drought-ridden farmers of the village today. Now, chirping bats fly the colonnades, and carved dragons, dancers, gods, and heroes stand anointed with cheap whitewash.

As our pada-yatra* [*The Hare Krsna walking tour of sacred India. Hare Krsna devotees are touring India by foot, traveling from village to village, town to town, and holding an ecstatic festival every evening, with chanting, dancing, and the distribution of food offered to Krsna. It’s a once-in-a-lifetime event, celebrating five hundred years since Lord Caitanya’s advent. (See RESOURCES, p. 22.)] travels, we come across such temples often. Main sites of tourism and pilgrimage bear their age well, cared for by government funds and the donations of the pious. Meanwhile, hundreds of lesser-known places struggle against decrepitude, against dirt, bats, and banyan trees, and plead for funds to renovate their crumbling forgotten shrines.

In Tamil Nadu, walls painted with foot-wide vertical stripes—white alternating with rust red—announce a building to be a temple. But Lord Caitanya’s movement is of a different stripe. Lord Caitanya Mahaprabhu taught that in the present age the way to invoke our dormant love for God is sankirtana, the congregational chanting of the holy names of God.

Temples are costly. Chanting is free. And the purpose of our pada-yatra is to spread Lord Caitanya’s sankirtana movement.

Lord Caitanya’s movement is practical for the present age. According to Vedic wisdom, there are four ages of civilization, epochs cycling like seasons over thousands of years. Each age has its own methods most suitable for spiritual realization. In the Satya age the means is silent meditation, in the Treta kingly rites of sacrifice, and in Dvapara veneration of the Lord in palatial temples. But in the present age, called Kali-yuga, only one means of spiritual realization is recommended—sankirtana, the congregational chanting of God’s names: Hare Krsna, Hare Krsna, Krsna Krsna, Hare Hare/ Hare Rama, Hare Rama, Rama Rama, Hare Hare.

In the present age we are short-lived, short-tempered, short-witted, and short-funded. So we need to reach Krsna consciousness the shortest way. That way is the chanting of the Hare Krsna mantra.

Anyone can chant the Hare Krsna mantra, regardless of the time, place, or circumstances. The holy name of Krsna is identical with Krsna Himself, so simply by chanting we come directly to the spiritual platform. Dirt encrusted on our hearts from countless lifetimes of material existence washes away, and we become liberated souls, happy in this life and eligible next to go back to Krsna, to join in the pastimes the Lord shares with His devotees in an eternal life of bliss and perfect knowledge.

The village children readily join in the chanting, all smiles and clapping hands. With some coaxing, the coarse-handed farmers give it a try, and their wives also. Later the brahmanas buy copies of our Tamil edition of Bhagavad-gita As It Is.

The Bhagavad-gita teaches that prosperity depends not on machines and technology, nor even on hard work, but ultimately on the mercy of Krsna. A village prospers when it has abundant grains. For grains we must depend on rainfall; and for rainfall, on Krsna.

The Gita tells how everyone can work in harmony with nature in such a way that Krsna will be pleased. When we work for Krsna’s pleasure, not just for our own, we soon find that nature provides everything we need. This naturally gives us pleasure, and this pleases Krsna even more. So a village that becomes Krsna conscious prospers spiritually and materially as well.

The key to this prosperity is to place Krsna in the center of whatever work we do. “Whatever you do,” Krsna says in the Gita, “do it for Me.” That’s why the people of Tirukkurungudi built the temple in the center of their town.

But the poorly financed, poorly attended temple is no longer enough. What’s needed now is the sankirtana movement of Sri Caitanya Mahaprabhu.

At the foot of Mahendra Giri, Lord Caitanya’s sankirtana movement offers a faded village a chance to bring back its former brilliance. If the villagers take up Lord Caitanya’s Hare Krsna sankirtana movement, all good fortune will surely follow. Perhaps the temple will even be restored. But even in the aging temple, the eternal Deity will be pleased, surrounded by His Krsna conscious people.