Back to Godhead > ISKCON > News > Academic Conference on ISKCON 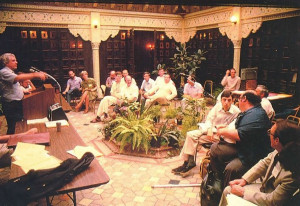 In the courtyard of Prabhupada’s Palace of Gold, David Bromley, professor of sociology at Virginia Commonwealth University, moderates an academic conference on ISKCON. A number of talented interpreters of the Indian religious tradition and the contemporary Western religious scene met to explore the implications of the Hare Krsna movement on the eve of its third decade in the West.

New Vrindaban, West Virginia—Twenty-five top scholars from the United States, Canada, and Great Britain assembled here in mid-July for a major academic conference titled “Krsna Consciousness in the West: A Multi-Disciplinary Critique.” Representing such institutions as Oxford, Harvard, the University of California, Brown, the London School of Economics, the University of Toronto, and Georgetown, participants included such distinguished scholars and authors as Bryan Wilson (internationally-known sociologist of sect movements), Robert S. Ellwood (noted historian of alternative religions, East and West), David G. Bromley (author of several influential books on the contemporary “cult” controversy), historian Thomas J. Hopkins (author of the popular college text The Hindu Religious Tradition), and Gordon J. Melton (author of Encyclopedia of American Religions and other works on religion in America). Other prominent academic observers of the Hare Krsna movement included historians and sociologists of religion, theologians, an anthropologist, a professor of clinical psychiatry, and a child psychologist.

Participants presented papers on a wide range of topics, including ISKCON’s historical roots and current status in India; the movement’s place in American religious history; the charismatic leadership of its founder, Srila Prabhupada; conversion into ISKCON and spiritual life within it; public attitudes toward the movement; rearing and educating children; the mental health of members; Christian and Jewish responses to the movement; ISKCON’s view of other religions; its potential theological contribution to Christian tradition; and the history and development of the New Vrindaban community, ISKCON’s famous religious and cultural complex. Presentation of the papers was followed by lively and wide-ranging discussion.

Philadelphia—The Bhaktivedanta Institute of Religion and Culture, an informal association of scholars within ISKCON, recently announced publication of the first issue of ISKCON REVIEW, a biannual, interdisciplinary journal dedicated to the academic study of the Hare Krsna movement. ISKCON REVIEW’S purpose, according to the introduction to the first issue, is “to stimulate and communicate—as well as to review—research and reflection on the Hare Krsna movement in all its aspects. It is intended both for those who have a direct interest in ISKCON as well as for those whose general interest in Hindu tradition, new religious movements, or contemporary spirituality might be served by a deeper awareness of the movement.”

Complimentary copies of the first few issues will be sent to a select list of nearly one thousand academics and professionals. Other interested persons should order from RESOURCES, page 22. 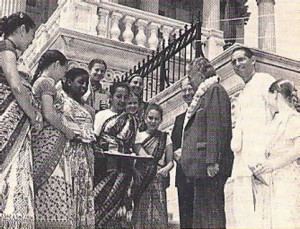 Washington, D.C.—Representative Ben Gilman (R-N.Y.) recently took time out of his schedule to meet girls from ISKCON’s Lake Huntington school. Gilman chairs the presidential commission on hunger, and he applauded the Hare Krishna Food for Life program. The girls invited him to their school, which is in his district.

The girls attended sessions of Congress and the Supreme Court, and then continued their U.S. tour to Atlanta, Gainesville, Tallahassee, New Orleans, Houston, Dallas, St. Louis, Chicago, and Detroit. Their main activities (in addition to camping) were chanting Hare Krsna and performing plays for audiences at scheduled stops.