Back to Godhead > Devotees > Preaching > Vegetarianism > The Joy of Cooking Badas

The Joy of Cooking Badas

The Joy of Cooking Badas

Making badas with a blender eliminates the grind
and adds to the pleasure of cooking classic Vedic dishes. 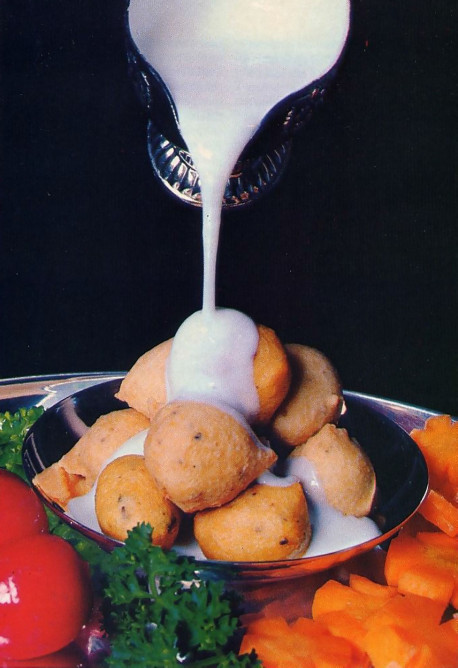 It’s sunny and sparkling, well organized, with a sizable pantry, but it’s far from an all-American kitchen. There’s no blender, no food processor, no microwave, but a large shelf with rows of spotless glass jars containing unusual-looking spices and dried herbs. Open the cupboards and you’ll find more such jars containing varieties of rices, dals, grains, sweeteners, dried fruits, and nuts, all suggesting that the cook here is as atypical as her surroundings in this sparsely populated, forested part of southern Oregon.

And she is. Yamuna-devi dasi studied Vedic cookery for eight years, traveling in India for some of that time to study from the masters there. In 1976, when I joined her in Oregon to take photographs for her upcoming six-hundred-recipe cookbook, she often invited me to help her make the dishes we were to photograph. I liked making all the many dishes we prepared, with just a few exceptions. One of those exceptions was badas.

Yamuna had returned from India with a thirty-pound stone mortar and pestle for grinding soaked dal into a fluffy paste to make badas. But since that process took expertise and was also time-consuming, she opted to borrow a manual grinding machine from a neighbor instead. She braced the clumsy grinder onto the edge of the back porch, and as she stood on the porch slowly pouring dal into the feeder, I stood on the ground turning the long crank handle. When we finally finished, we had to disassemble the contraption, soak it in hot water, scrub it, pat it dry, and reassemble it.

When we served badas in India, they were one of my favorite dishes, but in Oregon it was such an ordeal to make them that my taste for them dramatically waned.

Then Yamuna’s birthday came, and a few of us chipped in and bought her a blender. She viewed it with a mixture of skepticism and hopefulness, and that night, with the excitement of a scientist on the verge of an important discovery, she sorted, washed, and soaked some dal. First thing the next morning, she drained the dal and started feeding it into her whirring new blender, stopping it periodically to push the dal that had spattered onto the sides of the blender jar back toward the blades.

After a while she stopped the blender and felt the dal paste between her thumb and forefinger. It was almost as silky smooth as what we’d produced by hand! She put the paste into a bowl, mixed in some light seasonings, rolled the paste into small balls, and deep-fried them. We offered them to Lord Krsna, and on tasting them Yamuna asserted that most people wouldn’t be able to tell those badas from the ones made manually. (Some time later she discovered that food processors are even better than blenders for making feather-light dal paste). Now badas were easy to make, and my taste for them immediately revived.

To my delight, I learned from Yamuna that you can also combine dal pastes with elaborate seasonings and herbs, shredded or chopped vegetables, and chopped nuts or coconut. They can also be shaped into fancier forms than small balls—like cutlets, patties, doughnuts, or puffs. After you fry these delicacies, you can soak them in water until they’re spongy soft and then press them dry and smother them with lightly seasoned yogurt and zesty tamarind chutney. That’s dahi bada, and not only are they nutritious and easy to digest, but they are also one of the most exciting of the many dishes made from dal in Lord Krsna’s cuisine.

Looking back on those weeks we spent together, I see that despite being thousands of miles from India, despite being hundreds of miles from an established ISKCON center, despite our Western birth and upbringing, and despite our shortcomings in spiritual realization, we were making spiritual advancement. In that simple, scenic setting, we were happily cooking for the Supreme Personality of Godhead, offering our food to Him, and relishing His prasadam (after taking pictures of it for the cookbook). And after prasadam, with the sun setting and the day’s service behind us, we would sit on the front porch and read from Srila Prabhupada’s books. Once in a while, Yamuna would tell about some of the many times she had been with Srila Prabhupada in America, Europe, and India.

By serving Lord Krsna and hearing and chanting about Him and His pure devotee, we were following the eternal, supra-mundane path of bhakti-yoga. And we felt that Srila Prabhupada’s teachings were real and relevant to every facet of our lives. I especially remember one of his purports in Bhagavad-gita As It Is:

It does not matter what one is or where one is situated. The process is so easy that even a leaf or a little water or fruit can be offered to the Supreme Lord in genuine love, and the Lord will be pleased to accept it. No one, therefore, can be barred from Krsna consciousness, because it is so easy and universal. Who is such a fool that he does not want to be Krsna conscious by this simple method and thus attain the highest perfectional life of eternity, bliss, and knowledge? Krsna wants only loving service and nothing more. 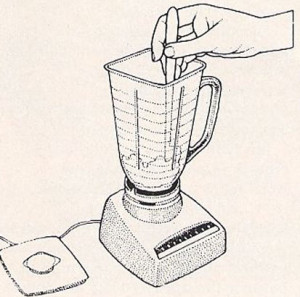 This is a favorite preparation from the Marawadi culinary tradition, requiring a skillful hand to maneuver the light dal pastes around the stuffings of sliced nuts and raisins. His Divine Grace A.C. Bhaktivedanta Swami Prabhupada frequently requested that this dish be prepared on special holidays. With a little practice, the results reward the effort and time.

Ingredients for the tamarind chutney:

To make the bada and stuffing:

2. Place half of the dal and approximately 1/3 cup water in a blender, and blend on high speed until the mixture is smooth and creamy. Pour into a mixing bowl. Place the remaining dal in the blender with ¼ cup water, the ginger, chilies, salt, and caraway seeds, and blend until creamy and smooth. If the mixture is not feeding into the rotating blades, turn off the motor and scrape the paste downward with a rubber spatula. Replace the lid and repeat the grinding until all the dal is a fluffy, light paste. Scrape the rest of the dal paste into the mixing bowl, add the baking soda, and mix well. The paste must be thick enough to hold shape when molded. If need be, bind the mixture with a few spoonfuls of sifted chick-pea flour or whole-wheat flour.

3. Soak the raisins in hot water for 10 minutes. Drain and chop. Combine the sliced nuts and raisins, and mash slightly to make the mixture tacky. Set aside.

To fry the badas assemble the following:

2. Moisten your left hand with water, place a rounded tablespoon of the paste in your palm, and spread it slightly. Put approximately 1 teaspoon of the nut-raisin filling in the center. Now place another tablespoon of the dal paste over the filling, spreading it carefully to the edges and covering the nut mixture. Carefully slip this stuffed bada into the heated oil. As quickly as possible, prepare 3 to 4 more badas to complete one frying batch.

3. Fry the badas to a golden color, about 5 minutes on each side. They will swell slightly. Remove each with a slotted spoon and carefully drop into the bowl of warm salt water to soak. Form and fry the remaining cakes in the same manner. Soaking time varies from 10 to 15 minutes up to 1 ½ hours, depending on the consistency of the foundation dal paste. The badas should become soft, airy, and spongy. Ideally, they are soft in 10 to 15 minutes. Press each bada gently between your palms to drain out the water. Place them on a plate and chill until ready to serve.

To make the yogurt sauce:

Combine the yogurt and salt, and churn until smooth.

To prepare the garnish:

1. Place each spice in a separate mound next to the bowl of churned yogurt.

2. Pick 6 to 8 coriander leaves off their stalks, rinse, pat dry, and add to the spice plate.

To prepare the tamarind chutney:

1. Soak the tamarind in the warm water for 15 to 20 minutes. Press the fruit off the stems so a thick brown puree is formed.

2. Press the puree through a wire strainer. Add the remaining ingredients and whisk well.

1. To offer to Krsna, place 2 badas in a small, shallow serving bowl.

2. Ladle ½ cup of yogurt over the badas.

3. Place 1 tablespoon of the tamarind chutney sauce on the center of each bada.

4. Sprinkle approximately ¼ teaspoon of cumin and coriander and a pinch of garam masala and chili powder over the badas.

5. Garnish with 1 or 2 coriander leaves.