Back to Godhead > Prabhupada > Pseudo Christians — Srila Prabhupada Speaks Out 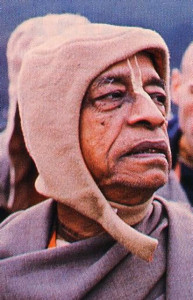 The following conversation between His Divine Grace A.C. Bhaktivedanta Swami Prabhupada and some of his disciples took place during an early-morning walk in Geneva on June 6, 1974.

Srila Prabhupada: Meat-eating is the main barrier to understanding God. The meat-eaters will never be able to understand Him.

Disciple: That priest you were talking with last night is a good example. He said to you, “Let us go on to higher topics. We’ve been talking so long about meat-eating.”

Disciple: You said, “Well, if you are sinful, it is useless to go on to a higher topic.”

Srila Prabhupada: Yes. This very fact is stressed in the Srimad-Bhagavatam [10.1.4]:

“Everyone can understand the Supreme Truth, except the rascals who are meat-eaters.” Vina pasughnat: “except those who eat meat.” Vina means “except,” pasu means “animals,” and ghnat means “a killer.”

And so Lord Jesus Christ reaffirmed the Biblical commandment “Thou shalt not kill.” You see, these so-called followers of Jesus Christ were killers from the very beginning. And despite the order of Christ, still they are continuing their killing to this day. But vina pasughnat: whatever seemingly pious things they may do, those who are animal killers, meat-eaters, can never understand God. It is simply not possible.

These pseudo religious people think, “We are doing very good work, philanthropic work, godly work. We are opening hospitals, building highways, feeding the hungry, and so on. So, what is the difference if we maintain the slaughterhouses and kill fifteen million animals a day? Of course, for some reason that we don’t understand, every now and then we end up in ghastly wars wherein we slaughter ourselves and others. But we are happy.”

These pseudo religionists also pride themselves on their huge buildings, their big skyscrapers and big factories. But all of this is duskrti—industrious rascaldom—because it is meant only for committing sinful activities, that’s all. “Yes,” they will say, “we are only after wine, women, gambling, and meat-eating—but we are civilized.”

Disciple: Recently one of your disciples visited Butler, Pennsylvania. While he was there he met a priest who said, “Oh, yes, I remember your spiritual master. In 1965 he was here. He’d just come from India, and he was giving lectures in our church.”

Srila Prabhupada: Yes. Upon arriving in America, I gave lectures in churches. And what is a church? A church is a place where there are God-conscious persons. So I never criticized a church or mosque. Never. Because whatever the group may be, the main thing is, they are God-conscious—and so they are good.

But when they disobey the Lord’s commandments, then I must criticize. Still, I criticize only these rascals—those who set the pattern, those who disobey the commandments out of sheer stubbornness. Otherwise, we have no criticism of them. We have no problem.

Srila Prabhupada: Why should we be? God is one. Why should we be sectarian? Each person, according to his own particular cultural background and circumstances, is praying to God. That is one of the forms of bhakti, devotional service to God.

Disciple: Many of the young people now—they may look to the Bible for instruction, but they stay away from the priests and ministers. They feel they’re hypocritical.

Srila Prabhupada: They are hypocritical. Simply hypocritical. These priests and ministers—all of them are hypocritical. Getting big fat salaries, drinking wine, and eating killed animals. And when you remind them, “Thou shalt not kill,” they say, “let us go on to higher topics.”

These pseudo Christians are such rascals. They conjecture Jesus Christ may have eaten fish. Even if it were true—after all, there was little or no other food available at the time. But these rascals think, “Jesus Christ ate fish. Therefore let us maintain big slaughterhouses.”

In Bengal they have a story about a man who saw a mosquito and said, “Bring a cannon.”

Disciple: So then do Christians still need people to give them spiritual guidance?

Otherwise, the Christian religion is very nice—if simply the people have spiritual guides who help them to follow it perfectly.

So many people have asked me, “Do you value Christianity?”

“Yes, I say. “If you faithfully follow your Christian religion, you will become perfect.”

So all over the world, people need spiritual guides who can demonstrate, based on God-conscious scripture, how to love God.