The Transformed Face of Indian Culture

Reflecting on the transmogrified face of Indian Culture 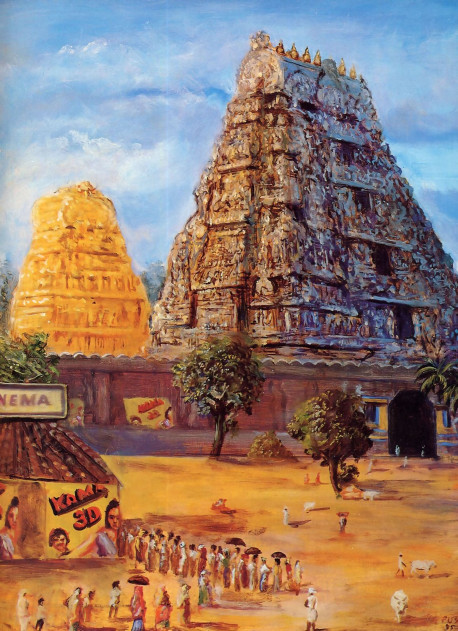 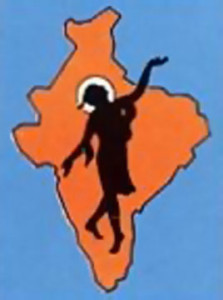 It ‘s the middle of the evening in Ramesvaram, one of the holiest cities in the Hindu world. The majestic temple of Siva turns quiet. Its towers disappear into the night. The god inside is said to be sleeping now. The temple elephant closes its eyes and rests on its side for sleep.

Midway along the temple’s southern wall, a street lamp casts light and shadow on what remains of an old gate, pale yellow, partly reconstructed in cement. Old granite slabs, grey and heavy, lie scattered between the wall and the road.

Across the road, from among the little shops, food stalls, and pilgrims’ hotels, a loudspeaker plays toward the gate. This might be the sound of Vedic hymns. Or special songs composed in honor of the temple? No way.

It’s cinema music—Indian cinema music. Blasting away into the night. Love songs blended in the studios of Madras and poured onto celluloid to give Tamil boxoffice films their special taste.

Does the Indian heart thirst for the ancient elixir of immortality? Come on now give us cinema, Cinema, CI-NE-MA! And not that artsy Satyajit Raj stuff either. Give us heavy punches, hot kisses, broken hearts, and murder. Heroes, superstars—magazines with scandals and gossip. And give us songs, lots of songs. We really, really go for those songs.

This is not to say that India has ceased to be a land of spirituality. Deep, strong spiritual currents still nourish the Indian life, as India’s rivers nourish her soil. But those divine cultural waters float pretty thick with junk nowadays. From Madras, Calcutta, Delhi, Bombay, tributaries swirl it downstream to the towns and villages.

So in the little village of Silaiman, seven kilometers out of Madurai, we find crowds of chattering farm people migrating down the roads at 10 P.M. to their mud-and-grass homes from the village cinema, a spacious hall of bamboo and palm thatch with a clunky old British projector and grey metal cone loudspeakers that stamp all directions with tinny soundtracks. If you’re walking around at one in the morning, you’ll find dogs, cows, hogs, chickens, donkeys, buffalo, and people, asleep in a village fog of song and dialogue.

In Vembar, another village, nearby homeson two sides of us send out waves of cinema songs top volume all day and night till three in the morning. It’s a local custom: the day before your family celebrates a marriage, you play cinema songs to invite all the neighbors to the holy event. (“May this union be sanctified, O Lord, by the blessed cultural waters from Calcutta, Madras, and Bombay.”)

This has all happened pretty fast. “Even fifty years ago,” Srila Prabhupada writes (he was writing back in 1965), “the social structure of all Indians was so arranged that they would not read any literature that was not connected with the activities of the Lord. They would not play any drama not connected with the Lord. Nor would they visit a place that was not holy and sanctified by the pastimes of the Lord. Therefore, even the common man in the village would talk about Ramayana and Mahabharata, Gita and Bhagavatam, even from his very childhood.”

That’s the way the villages used to be. “But by the influence of the Age of Kali,” Srila Prabhupada continues, “they have been dragged to the civilization of the dogs and hogs, laboring for bread without any sense of transcendental knowledge.”

This “sense of transcendental knowledge” is the essence of human life. The living being is essentially a transcendental entity, eternal, blissful, and full of knowledge, but when he forgets he is a tiny soul dependent on the Supreme Lord, he leaves hold of his transcendental sense of who he is, flounders in false ego, and makes a fool of himself in the muck of the material world.

According to how he grasps, material nature sticks him with a body to suit his fantasies, and then makes him act out the role the body requires. The body keeps him busy working hard to eat, sleep, mate, and defend. And when his time’s up in one body, material nature kicks him to the next—in one of 8,400,000 species—and the same routine starts all over again. Human life offers the living being the chance to free himself gracefully from this embarrassing series of illusions and get back to the transcendental life to which he rightly belongs. One does this simply by living in relationship with the Supreme Transcendence, the Supreme Lord, the Personality of Godhead.

The Personality of Godhead, Krishna is like the sun, and illusion is like darkness. Wherever there is Krsna there can be no illusion. The holy name and glories of Krsna are identical with Krsna Himself. The Vedic teachings, therefore, call upon us to be happy in this life and achieve spiritual liberation through regular chanting and hearing of the glories of Krsna, the Supreme Lord.

The Vedic sages tell us that the best way to fend off the cultural pollution brought on by the degrading Age of Kali is the chanting of the maha-mantra: Hare Krsna, Hare Krsna, Krsna Krsna, Hare Hare/ Hare Rama, Hare Rama, Rama Rama, Hare Hare. If we spread this chanting, at least we have a fighting chance that the influence of Kali will weaken and spiritual culture will gain strength and prevail.

Lord Caitanya’s sankirtana pada-yatra is therefore touring India to persuade people of the importance of their spiritual heritage and the chanting of the holy name of the Lord. In the pada-yatra, Indian devotees who’ve gotten back their natural taste for spiritual life walk together with Western devotees who grew up on the sweet goo of sense enjoyment and spit it out for the taste of Krsna consciousness. If the Indian people take the pada-yatra’s message seriously, they can save their culture and spiritualize their lives. And they can spread the culture of Krsna consciousness for the benefit of the entire world.

Human life is meant for spiritual realization. Village life in India used to be arranged in such a way that this realization would come about naturally. Children would gather around their parents and grandparents to hear rama-lila and krsna-lila, the pastimes of the Supreme Lord.

But now I’m having trouble even telling you this. I’m in a peaceful little village, seventy kilometers north of Pondicherry. But while I write, trying my best to concentrate, the villagers we’re staying with have gathered in the next room—to watch the cinema, on television.