Back to Godhead > Devotees > Preaching > The Many Loves of Auto Man

The Many Loves of Auto Man

In Vedic society “love” of dogs, cats, country, relatives, and humanity goes by a different name. 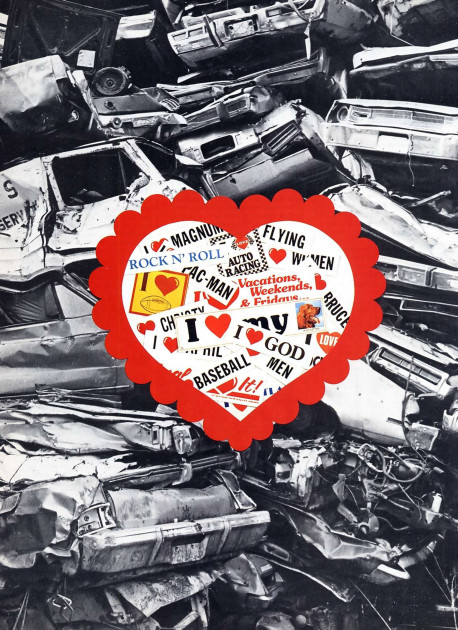 There’s a long history to bumper stickers. It began with Stone Age cave dwellers, who sometimes painted pictures on the walls of their homes. Later on, the Egyptians invented pyramids and decorated them with hieroglyphics. After that, Rome was built, and people were busy inscribing mottos and decrees on columns, architraves, Rosetta stones—wherever an inscription might catch the eye.

With civilization ploughing on through the twentieth century, man’s penchant for publication has led him to put his mark on, among other things, the bumper of his car. Future hieroglyphists will attempt to decipher the messages and slogans adorning bumper stickers dating from this, the Age of the Auto.

In particular, archeologists might have fun with stickers from the “I love” series. “I love” stickers feature, in place of the word “love,” a valentine heart and, after the heart, you name it, whatever turns you on. I love my baby, my car, my motorcycle, my country. I love dogs, cats, horses, parakeets. I love mother, father, boys, girls. The object of love may be represented in words or pictures, so that “I love my Doberman pinscher,” for instance, might have “I,” the valentine heart, and a dashing Doberman profile.

Adding a solemn note to the often frivolous “I love” series, “I love God” stickers (or equally rapturous, “God loves me”) are making their bumper debut. “I love God” stickers raise an intriguing question for anthropologists and linguists: Why do residents of the Auto Age use only one word, “love,” or one pictograph, the red heart, to denote affection, be it affection for dog, for God, or for anything in between? Language reflects culture, revealing the important elements in the day-to-day lives of a people. Eskimos have many words for snow, Arabs many words for sand and camel. Does Auto Man’s use of the word “love” for both God and dog indicate that spiritual knowledge—knowledge of the Supreme Lord and of our relationship with Him—is a negligible element in Auto Age culture?

These questions would not occur to your run-of-the-mill anthropologist, but they might to one a little familiar with the Sanskrit language, with Vedic culture, or with the translations of the ancient Vedic literature published by the Hare Krsna movement. In the detailed Vedic descriptions of the science of God realization, there are hundreds of words denoting love of God in its many stages and varieties, words that do not apply to our affection for anyone or anything but the Supreme. In Vedic culture, “love” of dogs, cats, country, relatives, family members, humanity, and so on, goes by a different name.

In Sanskrit the generic term for love of God is prema, whereas the term for love of other things is kama. Prema denotes the desire to satisfy the senses of Krsna, the Supreme Personality of Godhead, which might appear to be an awfully mundane definition of love of God, since what we call love in the mundane world also centers on sense satisfaction. To show affection for a friend, relative, or any fellow human being, we exchange food pleasing to our senses of taste and smell, clothing pleasing to the eye and touch, words pleasing to the ears, thoughts pleasing to the mind and intelligence. Our ideas of love are probably most closely associated with sexual pleasure, which is the grand finale of all sense enjoyment, involving an intense combination of seeing, touching, smelling, tasting, and pleasing words.

Love of God also revolves around sense satisfaction, but it is not ordinary love because Krsna does not have ordinary senses. His senses are so extraordinary that the Vedic literature, to prevent us from confusing Krsna with lesser persons, sometimes says that He is sense-less, or, in other words, impersonal. The Svetasvatara Upanisad states that the Supreme Lord has no eyes yet sees everything, no ears yet hears everything, no hands yet accepts all that is offered to Him in love. “No eyes,” “no ears,” and “no hands” means that His eyes, ears, and hands are not like ours. With His eyes Krsna can see past, present, and future, in every corner of the universe and beyond the universe. He can hear the prayers of all His devotees. He can reach out to accept any offering, however great or small. Krsna’s senses are unlimited and all-pervading.

If we don’t understand that God is a sentient being, a person, it is useless to talk of loving Him. And until we understand the transcendental nature of His senses, we won’t know how to love Him. Krsna can not only hear our prayers and reach out to accept our offerings wherever we might be, but through that hearing and reaching out He can also taste, smell, and speak. The Brahma-samhita explains that all of Krsna’s senses are fully interchangeable: He can see with His ears, taste with His eyes, hear with His tongue. When devotees offer delicious food to the Lord, praying that He kindly accept what they have lovingly cooked, Krsna tastes the offering simply by hearing the prayers. With such knowledge of Krsna’s transcendental personality, devotees are eager to love Him, offering Him not only food but fragrant flowers, luxurious clothing, and whatever else the Vedic literature recommends for His satisfaction.

Lust?! Is an altruist or a responsible parent lusty? Was the Live Aid concert, which raised more than $50 million to feed the starving in Ethiopia, a gross act of selfishness? Of course not. Not according to common definitions of lust, anyway.

The Vedic definition, however, is uncommon, for to comprehend it we first need to acquaint ourselves with our eternal, spiritual identity. The Bhagavad-gita explains that we are not our physical bodies, but individual spirit souls residing within the body, and eternal parts of the Supreme Soul, Lord Krsna. As parts of Krsna, our eternal function is to serve Him, just as a finger’s function, as part of the body, is to serve the entire body. The finger picks up food and gives it to the stomach. In that way the finger is fully nourished, although it does not eat directly. Similarly, serving Krsna nourishes and satisfies our spiritual selves.

Both Krsna and those who inhabit material bodies are eternal persons, but Krsna, the Supreme Eternal, provides for everyone else. He gives us sunlight, rain, food, and shelter, continuously fulfilling our desires to enjoy apart from Him. Everything you could possibly put on a bumper sticker after the words “I love” is a gift of the Supreme Lord. Yet we accept these gifts without gratitude, using them to gratify our temporary bodies (another gift), forgetting our eternal, reciprocal obligation to satisfy Krsna. This is selfishness. This is lust.

There is no qualitative difference between an excessive, indiscriminate desire for sexual pleasure (which is how we might ordinarily define lust) and the relatively selfless desire to feed the starving or to minister to the diseased and homeless. Both desires cater to the physical senses our own or those of others—not to Krsna’s senses.

Lust also invades the realm of religion when we, recognizing that God is almighty, beg Him to use His might to satisfy our bodily cravings—the very cravings that beleaguer us only because we have forgotten our loving relationship with Him. “I love God” on my bumper may impress you as more pious than “I love my Chrysler,” but if my affection for God depends on His willingness to please me, then “love” is the wrong word.

It’s not just that lusty activities fail to satisfy Krsna. One may argue, after all, that Krsna is not so important. Feeding Africa’s starving millions is a more pressing matter than worrying about God or haggling over definitions of love and lust. But the trouble is that activities which cater to the physical body fail to satisfy anyone, because as Krsna’s eternal parts and parcels, we derive our satisfaction from His.

The tragedy of Live Aid and other extremely well-intentioned, well-organized altruistic efforts, the tragedy of all body-centered endeavors, is a tragedy of mistaken identity. Ignorant of the spiritual position of all living entities in their relationship with Krsna, we are attempting to nourish the body without feeding the stomach.

Thus in Africa ten years ago millions were starving, millions more starve today, and unless we learn how to send Krsna consciousness in addition to our shipments of rice and wheat, millions will starve in the future.

So if a Krsna conscious archeologist were to excavate an auto junkyard in the year 5000 and take a gander at a few “I love” bumper stickers, he might be able to tell you a thing or two about what went wrong with Auto Man. Then again, if Auto Man himself were to dig deeply into the Vedic science of love of God, future generations might have a happier tale to tell.