Back to Godhead > ISKCON > News > ISKCON Festival in Calcutta

Float Parade Is Part of ISKCON Festival in Calcutta 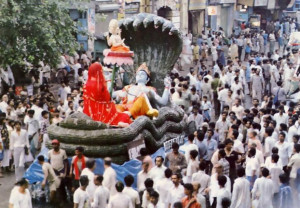 One of the floats featured Laksmi-Narayana (the goddess of fortune and the Supreme Lord, Narayana, her husband) and Brahma atop a lotus flower.

Calcutta—Three chariots carrying Jagannatha, Balarama, and Subhadra, along with five decorated dioramas depicting the Vedic heritage of Bengal, recently journeyed through this city as part of ISKCON’s annual Ratha-yatra festival. Instead of one chariot, as in previous years, the devotees prepared three (with heights of fifty feet, forty feet, and twenty feet). In addition, a special float parade, sponsored by local companies, was a new feature. This being the five-hundredth anniversary of the appearance of Lord Caitanya, the devotees made elaborate arrangements to make the celebration special.

Dedication of Krishnaland in Vancouver
Coincides with Lord Caitanya’s Quincentennial 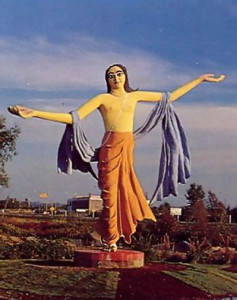 Vancouver—Lord Caitanya’s outstretched arms beckon commuters, the curious, and devotees to visit a new attraction here called Krishnaland, the eight-acre Vedic community at the ISKCON center. The recently unveiled statue of Lord Caitanya in a dancing pose (sculpted by Subrata Lahiri) stands in a garden with a fountain and at thirty feet, is the tallest freestanding statue in Canada.

At the dedication ceremony, Elwood N. Veitch, member of the legislative assembly. commended the devotees and requested that they continue to foster “the spiritual growth of all our people.” Jagadish C. Sharma, India’s consul general, requested everyone present to make next year’s five-hundredth-anniversary celebration of Lord Caitanya’s appearance an internationally recognized occasion.

ISKCON has been invited to participate in the 1986 world Exposition in British Columbia. Some thirty countries will take part, and visitors are expected from all over the world. The ISKCON devotees plan to sponsor the Ratha-yatra parade and a Festival of India as part of the-exposition. These exciting developments ensure that Lord Caitanya’s appearance anniversary will be widely recognized and celebrated in western Canada next year.

Vancouver’s ISKCON temple has become a major spiritual center in western Canada. The heart of the community is the lavish Vedic-style temple (completed in 1983), which has become a center of worship for thousands of Indians. The temple, with its stained-glass windows, marble floors, carved pillars and arches, and exotic murals, has attracted widespread media coverage. Forty members of Vancouver’s school board visited ISKCON’s elementary school last year, and since then, many schools have sent their classes for a guided tour of the community.

Future developments for Krishnaland will include a restaurant, a museum, and a cultural center featuring a garden of statues and dioramas.