A New Wrinkle On
An Age-Old Problem 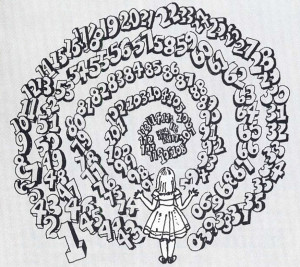 Three generations of women were waiting at the bus stop. The eldest woman, wearing a loose floral print over her ample form, appeared to be somewhere in her fifties. She was leaning back against the bench, listening wearily to her daughter’s spirited attacks on the welfare office. The middle woman (the daughter) seemed the most animated of the group, fanning herself with a newspaper and expressing herself with vigor. The youngest, a twelve-yearold girl, gazed absently at the passers-by, singing under her breath and holding a large shopping bag between her bony knees. All three faces bore the family markings: wide brown eyes, prominent cheekbones, receding jaw. Yet a certain difference caught my eye. One face was fresh and pleasing, one was full with flesh and assurance, and the third was gaunt and weathered. I wondered if they could see the pattern of destiny as it was so profoundly exposed under the hot summer sun.

Every physical body ages. It’s a fact of life. The rich, the beautiful, the intellectual-everyone witnesses the deterioration of his or her body due to age. And we are puzzled: Why does time ravage our bodies, while within we are still full of youthful desire?

Instinctively we loathe this gradual deterioration of our physical and mental faculties. Every grey hair, every wrinkle, suddenly becomes a threat. Soon we will lose our energy, our eyesight, our memories, our physical beauty. And we feel that universal dread that underlies all human existence: we must die.

We long for permanence. Although aging is foretold by our very birth, we nevertheless fight to stave off its insidious encroach. Faced with mounting evidence that we will grow old and die, we may resort to various psychological schemes for relief. Some people enter their senior years with wild abandon, acting more like teenagers than adults. They smear color into pallid cheeks and force weakening bodies to endure strenuous exercises. Thinking young and struggling to play hard, many older people desperately cling to a youth that will never return. Unfortunately, this only increases their attachment to that which they are destined to lose. Thinking young may be better than thinking old, but it can’t make us young. And it certainly can’t save us from death. Consequently, our most ardent desires for youth and immortality are frustrated. What we need is reassurance that indications of advancing age do not signal the end of all hopes for happiness.

This reassurance can be found by studying the Vedic scriptures under the guidance of a spiritual master. This will help us to understand that the physical body has no relation to the eternal soul (the self) within. The hapless soul is illusioned, thinking himself to be the physical body. And this mistaken identity is the source of his greatest fear and pain. He sees his body deteriorating, yet he has no knowledge of his destiny after death. Although old age and death are both foreign elements for the pure spirit soul, his attachment to the physical body and identification with it force him to think that he is aging unto death. This is maya, or illusion.

Independent of this illusion of bodily identification, the eternal soul possesses a consciousness rich with unlimited fulfillment and happiness, free from the annoyances of old age and death. The real self, the pure spiritual entity, is eternally linked with the Supreme Lord, the source of all pleasure. When this consciousness is awakened, fear of death and old age are banished. This point is explained by His Divine Grace A.C. Bhaktivedanta Swami Prabhupada:

Apparently a devotee may grow old, but he is not subjected to the symptoms of defeat experienced by a common man in old age. Consequently, old age does not make a devotee fearful of death, as a common man is fearful of death. A devotee knows that after death he is going back home, back to Godhead; therefore he has no fear of death. Thus instead of depressing a devotee, advanced age helps him become fearless and thus happy. (Srimad-Bhagavatam 4.27.24, purport) 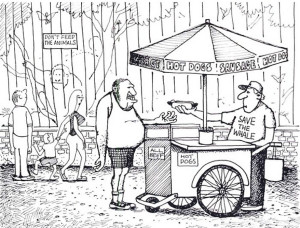 On a recent trip to New York I visited the Bronx Zoo. My husband and my brother-in-law taking turns behind my two year-old son in his stroller, we toured the bird sanctuary and the reptile house, at last coming to a particularly large and prominent sign: “The Most Dangerous Animal in the World.”

Curiously I read of the beast that could quickly and easily annihilate all other species. Instinctively I drew back within the darkened chamber, raising my eyes to peer through the bars. And then I saw it—a mirror!

While I appreciated the conservationists down at the New York City Department of Parks and Recreation—that’s one more voice against man’s cruelty toward other species—I also detected hypocrisy. After all, only an hour earlier my brother-in law, a vegetarian, had gone to a zoo concession stand to buy lunch. “It’s disgusting,” he had said on returning empty-handed. “They don’t serve anything here but meat!”

That’s hypocrisy. You have a group of people who, on the one hand, work diligently to protect panthers, whales, and seals, yet who, on the other hand, blatantly support the slaughter of cows.

Eating meat, say India’s ancient Vedic scriptures, is violent, irresponsible, and risky. They especially warn us that a heavy curse of karmic punishment befalls all who associate with the heinous crime of cow slaughter. Of course, we may not accept the Vedic scriptures—that’s voluntary. But karma, you’ll find, is mandatory. No one is exempt from karma’s stringent control. And, as the law of karma says, you reap what you sow. The animal killer, the flesh eater, is risking repeated births among the animal species, forfeiting for perhaps eons his chances for higher consciousness. With conservationists backing such humanitarian campaigns as “Save the Seals” and “Save the Whales,” it’s ironic that they shun the most important campaign—to save the human beings from becoming animals. In the transcendental sense, human beings are the real endangered species, since so many people seem bent on risking everything for the dubious benefits of indiscriminate eating. It would appear that man is his own worst enemy, his own natural predator.

I still consider the officials of the Bronx Zoo hypocrites for advertising themselves as the kindly custodians of the animal kingdom. But I have to admit that in citing man as the most dangerous animal in the world, they are far more accurate than they imagine.

A High Price For Tomatoes

Newly arisen amid the rice paddies and cabbage fields just forty miles outside Tokyo is the city of Tsukuba, Japan’s “City for Science,” recently illustrated in Smithsonian magazine. Tsukuba Science City, as it’s now known, was conceived twenty years ago for bringing together the most advanced technological minds in Japan. Today it has become a scientific metropolis. Thus, among many of its thirty thousand residents, Tsukuba is referred to somewhat wryly as “brain city.”

For the more down-to-earth, Tsukuba’s expo boasted the latest in high-tech tomatoes. A massive overhead rotating lens system selects and focuses the sun’s most beneficial rays, causing a single plant to produce up to ten thousand tomatoes.

In spite of all the tomatoes, however, as well as the many other fascinations at Tsukuba’s twenty-first-century technological wonderland, something, many residents say, is missing. Tsukuba may be a city of brains, they say, but it has no soul.

“I just don’t feel at home here the way I did in Tokyo” says Dr. Srigeru Yamane, an electrotechnical research scientist. Although Tsukuba was also intended to serve as an alternative living area for Tokyo’s burgeoning population, many Tsukubaites now long for the shoulder-to-shoulder togetherness they once had back in the swarming megalopolis. “It’s hard to explain to a foreigner,” says Dr. Yamane, “but any Japanese understands it—we Japanese like being close together. Despite the space, the green lawns, the clean air or maybe because of them—I feel spiritually disjointed here.”

Spiritually disjointed? Most of us are probably familiar with how occupational circumstances can separate an individual from comfortable social surroundings and family relationships. We all feel a little “disjointed” at times. But we may not be so aware of how our entanglement in technological endeavors may bar us from the most important necessity of human life, spiritual realization.

From the time-honored Vedic literature, we can understand that human intelligence is meant for cultivating knowledge of our original nature as eternal, spiritual beings, part and parcel of God. A society that squanders its resources in technological competition, therefore, is misusing those resources, especially the resource of higher intelligence.

Ultimately, any truly progressive society must provide for the spiritual benefit of everyone while also providing prosperity, harmony, and unity. This is only possible spiritually, by centering all activities (from agriculture to computer science) on the satisfaction of the Supreme Personality of Godhead. The attempt to develop society around any conception other than pleasing the Supreme Personality of Godhead will always fall short of providing the spiritual nourishment we require.

“But what about all those tomatoes?” one may ask. “Isn’t that a wonderful accomplishment, even without God in the center?” But as Krsna explains in the Bhagavad-gita, “Know that all beautiful, glorious, and mighty creations spring from but a spark of My splendor.” Since the tomato plant originally came from Krsna, the sun originates from Krsna, the elements used in the elaborate lens system came from Krsna, and even the intelligence required to put it all together is also coming from Krsna, the credit, as well as the tomatoes, should be offered to Krsna. A society ignorant of the principles of God consciousness—even a “brain city”—is doomed to remain a society with no soul.