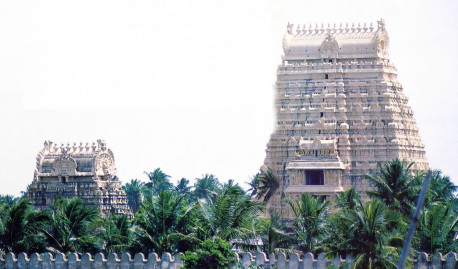 Ranganatha is the largest Visnu temple in India. Two of the seven giant gopuras (gateways) tower over the countryside and can be seen for miles.

Shortly after entering the renounced order, Lord Caitanya set out on foot to tour the holy places of South India. Chanting God’s holy names (Hare Krsna, Hare Krsna, Krsna Krsna, Hare Hare/ Hare Rama, Hare Rama, Rama Rama, Hare Hare) and absorbed in ecstatic love of God, He turned everyone into a devotee of Lord Krsna, the Supreme Personality of Godhead. After having traveled to many holy places in South India, He came to the city of Sri Rangam. A number of significant events occurred during the Lord’s stay here. And as we shall see, the residents of Sri Rangam have not forgotten those events, even though almost five centuries have passed. 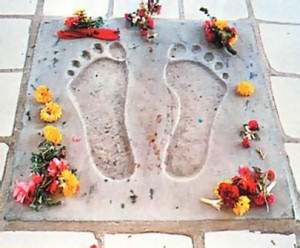 A replica of Lord Caitanya’s footprints are enshrined in a miniature temple on the city’s main road. Each day pilgrims on their way to the Ranganatha temple stop here to offer flowers.

On an island in the Kaveri River the Lord saw the city of Sri Rangam. He also saw the beautiful temple of Ranganatha, the largest Visnu (Krsna) temple in all of India, with its seven surrounding concentric walls and its towering gopuras (gateways). And when He entered the temple, He began dancing in ecstatic love of God and chanting the holy names. His tall and graceful form was effulgent and golden. His arms reached down to His knees. Lord Caitanya was dressed in the traditional saffron cloth of a sannyasi, a member of the renounced order. And when lie began to dance before the Deity, everyone was struck with wonder. The news of Lord Caitanya’s arrival quickly spread throughout the city, and many people began to assemble just to see Him.

Having heard about this uncommon personality who had come to Sri Rangam, Vyenkata Bhatta, the head priest of the temple, came forward with great respect and invited Lord Caitanya to dine at his house. Lord Caitanya accepted the invitation, and Vyenkata Bhatta requested Him to remain a guest in his house until the four months of the rainy season Caturmasya) had ended. “Please be merciful to me,” Vyenkata Bhatta said, “and stay at my house during Caturmasya. Speak about Lord Krsna’s pastimes and kindly deliver me by Your mercy.” 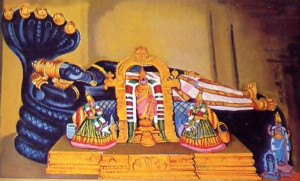 During Lord Caitanya’s visit to the South Indian city of Sri Rangam, He was always seen chanting Krsna’s holy names and dancing. In the painting at left the Lord enters the main temple to dance in ecstatic love of God before the Deity of Lord Ranganatha.

Lord Caitanya agreed, and lie passed His days in great happiness, discussing Lord Krsna’s transcendental pastimes. Sometimes He would perform sankirtana through the streets of the city. On seeing the beautiful form of Lord Caitanya and the ecstatic way in which He chanted and danced, the people were astonished. Man thousands of people from various parts of the country came to see the Lord, and after seeing Him they too began chanting Hare Krsna in ecstasy. Indeed, after seeing Lord Caitanya, all these people became devotees of Lord Krsna, and all their unhappiness and distress vanished. Lord Caitanya was very pleased by all these happenings, and He requested everyone to go out and spread the sankirtana movement. The influence of Lord Caitanya was felt in every home in Sri Rangam. 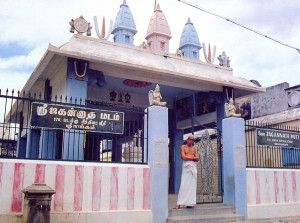 Lord Caitanya stayed at the house of Vyenkata Bhatta. Today, a temple of Lord Jagannatha (Krsna) marks that spot

On one occasion Lord Caitanya came upon a devotee reading the Bhagavad-gita. The Lord observed in the body of that devotee symptoms of ecstatic love of God—hair standing on end, tears welling in the eyes, trembling, and perspiration. The Lord was very pleased to meet this pure devotee. Some people standing nearby, however, were laughing and joking about the way the devotee was reading. Actually he was illiterate. That’s why people were laughing at him.

Lord Caitanya asked the devotee, “My dear sir, why are you in such ecstatic love? Which portion of the Bhagavad-gita gives you such transcendental pleasure?” 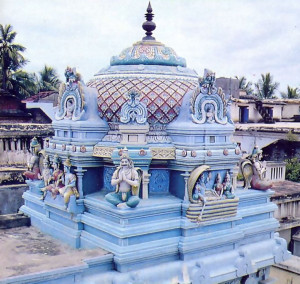 A dome on the roof indicates where the Deity stands in the temple below.

“I am illiterate,” the devotee replied, and therefore do not know the meaning of the words. Sometimes I read Bhagavad-gita correctly and sometimes incorrectly, but in any case I am doing this in compliance with the orders of my spiritual master. Actually I am looking at this picture of Lord Krsna sitting as Arjuna’s charioteer. Taking the reins in His hands, He appears very beautiful and blackish. When I see this picture, I am filled with ecstasy. As long as I read the Bhagavad-gita I simply see the Lord’s beautiful features. It is for this reason that I am reading Bhagavad-gita, and my mind cannot be distracted from this.” 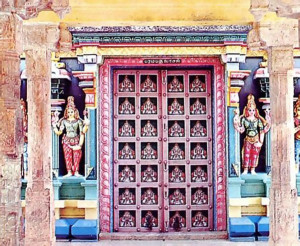 The main door of the temple is flanked by colorful reliefs.

Then, much to everyone’s surprise, Lord Caitanya embraced the devotee and proclaimed that he was actually the greatest scholar of the Bhagavad-gita because he had realized the real purport: love for God Krsna. Being touched by Lord Caitanya that devotee felt great spiritual ecstasy, and he realized that Lord Caitanya was none other than Lord Krsna Himself. 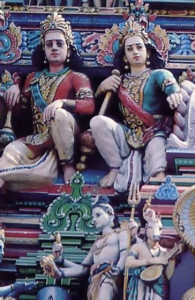 When the four months of the rainy season ended, Lord Caitanya prepared to Leave Sri Rangani and continue His pilgramage Vyenkata Bhatta, who had developed great affection for Lord Caitanya, became overwhelmed with lamentation and fainted. All the residents of Sri Rangam felt their hearts ache with love for the great transcendental personality who was leaving thetas.

Even though almost five centuries have elapsed since the Lord’s South India tour, the residents of Sri Rangam have not forgotten the great fortune Lord Caitanya brought to their city. A shrine at the main entrance to the city displays the Lord’s footprints and commemorates the Lord’s arrival. In another area of the city, what was once the home of Vyenkata Bhatta is now a beautiful little temple. The temple has many paintings depicting Lord Caitanya’s pastimes at Sri Rangam. In the central hall of the temple, there is a diorama of Lord Caitanya and a Deity of Lord Krsna (Jagannatha). 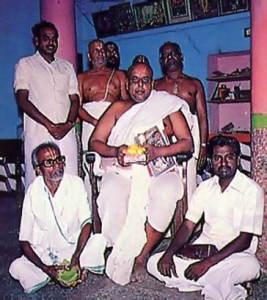 Surrounded by disciples and family members, Rangaraja Bhatta, a direct descendant of Vyenkata Bhatta, is a member of the temple advisory committee.

Amazingly, the family descendants of Vyenkata Bhatta still live at Sri Rangam. The head of the household, Rangaraja Bhatta, continues to carry on the tradition and heritage of his forefathers by serving on the Ranganatha temple advisory committee. Whenever visited by devotees of the International Society for Krishna Consciousness (ISKCON), Rangaraja Bhatta and his family are always glad to receive them. Rangaraja Bhatta says, “The members of ISKCON, headed by His Divine Grace A.C. Bhaktivedanta Swami Prabhupada, are fulfilling the mission of Lord Caitanya and preaching the sankirtana movement all over the world. This is very wonderful, because it was predicted by the Lord Himself.”