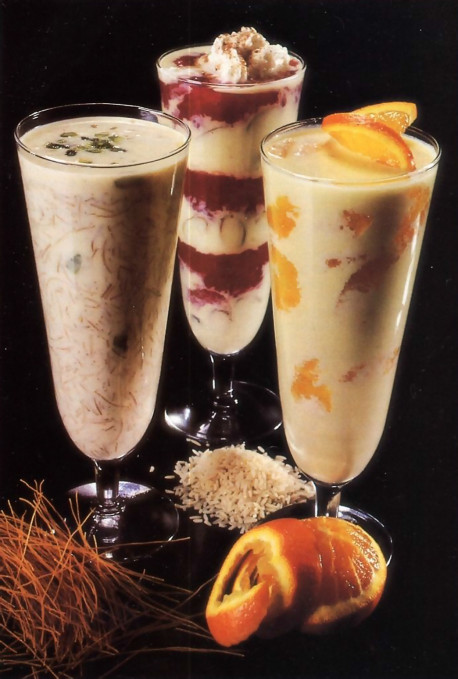 If you’ve ever been to a Sunday Love Feast at a Hare Krsna temple, it’s more than likely that you’ve tasted sweet rice—that cool, thick, milky dessert with rice in it—often the highlight of the feast.

Sweet rice (one kind of ksira, or condensed milk dish) was also a favorite five thousand years ago, when Lord Krsna walked the earth, and through the centuries its popularity has continued. Five hundred years ago, when the Lord appeared as Caitanya Mahaprabhu (we’re observing the anniversary of His appearance in the coming weeks). He personally related a historical incident that involved this dish.

Once a highly advanced devotee named Madhavendra Puri was living in the holy village of Vrndavana, India, peacefully worshiping Krsna in His Deity form. (For those advanced spiritually, the Deity form in the temple is not simply a stone or wooden statue but a direct manifestation of the Lord. In other words, the Deity of Krsna is Krsna: Krsna and His Deity are identical. Since God is omnipotent, if He wants to appear as the Deity so that His devotee can serve and worship Him, who can stop Him?)

One night the Deity came to Madhavendra Puri in a dream and asked him to collect some Malayan sandalwood. The paste made from this unique wood has a cooling effect when smeared on the body, and the Deity was apparently feeling a little uncomfortable in Vrndavana’s scorching summers. Madhavendra Puri was very pleased at receiving this request from his Lord, and he immediately left Vrndavana and headed for Jagannatha Puri, the city about a thousand miles away where sandal-wood was available.

En route to the city, Madhavendra Puri stopped over at the town of Remuna, where he saw the worship of a second Deity of Krsna, Lord Gopinatha. Madhavendra Puri especially appreciated how Gopinatha was being offered such opulent food daily. And when he heard that every evening the Lord received twelve pots of ksira that tasted as good as nectar, Madhavendra Puri thought to himself, “If I could taste this ksira, I could prepare a similar offering for my Lord hack in Vrndavana.” But at once he became ashamed. The idea in Deity worship is that the Lord should be the first to taste every dish, and at the time Madhavendra Puri was thinking he’d like to taste the ksira, Gopinatha hadn’t vet eaten it. Feeling that he had offended the Lord, Madhavendra Puri left the temple and went to a solitary place to chant Hare Krsna.

But Lord Gopinatha had not considered Madhavendra Puri offensive. That night the Lord came to one of His priests in a dream and told him, “I have hidden a pot of ksira for Madhavendra Puri. Please take it to him.” The priest immediately woke up and bathed. Then he entered the Deity room and found the pot of ksira exactly where Gopinatha said he had hidden it!

The priest rushed from the temple with the pot of ksira, found Madhavendra Puri, explained what had happened, and gave him the ksira. In great ecstasy, Madhavendra Puri ate the ksira stolen for him by Lord Gopinatha. And from that day on, the Deity of Krsna in Remuna became famous as Ksira-cora-Gopinatha, “Krsna, the Sweet-Rice Thief.”

Although we may not be so fortunate that Lord Krsna will personally steal sweet rice for us, we can prepare, offer, and relish ksira while remembering this pastime and thus enter into the mood of devotion exemplified by Madhavendra Puri.

Although rice ksira (the famous sweet rice) is the most common type, there are many others, some of which you may like even better. You can make a type of ksira to fit every occasion and season. Light fruit ksiras, served well chilled, are refreshing in the hot summer months, and hearty grain ksiras, sometimes served warm, are welcome favorites during the cold winter months.

As for the health side, the amino acids (the building blocks of protein) in milk and grain complement each other. So by eating these together you get more usable protein than if you ate the same amounts of milk and grain separately. And if you shy away from the standard sweetener, granulated sugar, you can substitute light-colored, mild-flavored honey or unrefined sugar. Just remember that since the flavor of the ksira depends to a great extent on the sweetener, try to use a mild and delicate one.

Whatever kind of ksira you make, the most important ingredient is your consciousness. In Madhavendra Puri’s case, he wanted to taste Lord Gopinatha’s ksira not to enjoy it but to learn how to make it for his own Deity back in Vrndavana. After Madhavendra Puri received the pot of ksira, he drank it in great ecstasy, broke the clay pot into tiny pieces, and carefully kept them in his cloth. Each day he would eat one of those tiny pieces of the pot and become ecstatic by remembering Gopinatha’s mercy upon him.

We cannot imitate Madhavendra Puri’s exalted level of devotion, but we can keep the pleasure of the Lord and His devotees foremost in our mind when we prepare ksira at home. That consciousness will be the success of our dish—and of our lives.

To prepare condensed milk pudding (ksira), use a saucepan that’s double or triple the volume of milk. For example, if the recipe calls for 2 quarts of milk, use a 4- to 6-quart saucepan. We highly recommend a heavy 5-to 6-quart nonstick saucepan; it will let you use maximum heat. Your milk will have room to rise, froth, and vigorously boil in the early stages of cooking, and this will cut cooking time to a minimum. For perfect results, stir the pudding constantly. During the last 15 to 20 minutes, keep the flame in the medium range and stir very carefully. Rhythmic and uniform stirring will prevent the thick milk on the bottom of the pot from scorching.

Generally, the puddings should be only slightly thick when removed from the flame, for they inevitably thicken further as they cool to room temperature. This is especially so when the pudding contains rice, noodles, or some other grain. Refrigeration will thicken the pudding even further.

1. Pour the milk into a 5- or 6-quart saucepan and bring to a boil over a high flame. To avoid scorching, stir constantly with a wide wooden spatula.

2. Reduce the flame slightly to the medium-high range and allow the milk to boil for about 25 to 30 minutes, or until it is reduced to slightly more than half its original volume. Stir constantly.

3. Add the sweetener and continue boiling the milk, stirring attentively until it is reduced to a thick liquid, or about 1/3 its original volume.

4. Remove the saucepan from the flame and stir in the cardamom powder. Cool the ksira to room temperature, stirring now and then. Refrigerate for at least two hours.

5. Before offering to Krsna, you may garnish His serving with a small piece of edible silver or gold foil or a sprinkle of slivered, blanched, raw pistachio nuts, or both. 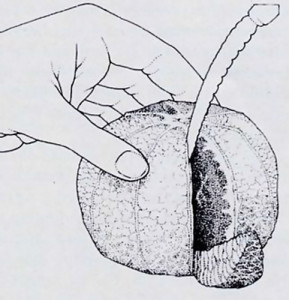 A delectable citrus fruit called kamala grows in Bengal and is often used to make a delicious condensed milk dish. You can imitate the dainty flavor of this fruit by using fragrant, sweet tangerines or mandarin oranges. When you add the juicy cells of either of these fruits to sweetened, homemade condensed milk, the result is a rich, beautifully flavored pudding.

1. Wash the citrus fruits. With a sharp knife, cut off a few strips of orange or tangerine rind, removing only the colored orange part and avoiding the bitter white pith. Slice the rinds into paper-thin shreds and save for a garnish.

2. Peel the citrus fruits and cut into segments. Take each segment apart by removing the white membranes and leaving only the juicy cells (avoid crushing them). Set the cells aside.

3. Prepare a simple ksira as in steps 1 to 3 of the above recipe for Plain Condensed-Milk Pudding.

4. Remove the saucepan from the flame and cool the ksira to room temperature. Gently fold in the citrus cells, and then refrigerate the pudding for at least 2 hours. Before offering to Krsna, garnish His serving with a few paper-thin shreds of orange or tangerine rind.

1. Break the vermicelli into pieces 2 ½ to 3 inches long and crush slightly.

2. Heat the ghee in a 5-or 6-quart saucepan over a medium flame. Add the vermicelli and gently stir-fry until the noodles turn a rich golden brown.

3. Pour in the milk, turn the flame up to high, and, while stirring constantly, bring the milk to a full boil. Reduce the flame slightly (just enough to prevent the milk from boiling out of the saucepan) and briskly boil for about 15 minutes.

4. Break open the cardamom pods, remove the black seeds, and crush them to a powder.

5. Add the cardamom powder and sweetener to the milk and continue to boil over a moderate flame for about 20 to 30 minutes, or until the milk is creamy and slightly thick. Stir in the almonds and raisins.

6. Remove the saucepan from the flame, cool the milk to room temperature, and chill. Before offering to Krsna, garnish His serving with a small piece of edible silver foil or a sprinkle of minced pistachio nuts, or both.