How To Chant On Japa Beads

Why And How To Chant Hare Krsna

All you need is your voice and your ears to begin this simple, sublime yoga meditation.

You’re unusual if you haven’t, because for the past seventeen years this statement has been printed on millions of signs and billboards, cards and flyers, posters and book jackets. It’s been repeated on television and radio, in newspapers and magazines, and personally to hundreds of thousands of people in airports, in malls, and on street corners around the world. “Please, just try chanting Hare Krsna, and your life will be sublime!”

Why are we asking everyone to do this? What happens when you chant the names of God?

When you chant God’s names, you reawaken your original spiritual consciousness. Because all living beings are spiritual souls, we’re originally Krsna conscious. God conscious. But because we’ve been in this material world an endlessly long time, our consciousness has become covered by material illusion.

What is material illusion? It’s what we’re in when we think, “I am this material body, and this material world is mine, meant for my pleasure. It’s mine to possess, control, and enjoy without limits.”

This just isn’t the truth. We’re not these bodies; we’re spiritual souls. This material world isn’t ours, it’s God’s. And He alone has the ability to control it and the unquestionable right to enjoy it. When we try to usurp His position of proprietor, controller, and enjoyer, we simply end up trapped in the perplexities of the material world.

Once that happens, we can’t escape by our own strength. A man bound hand and foot can’t free himself. He must call on someone whose hands are free and ask for aid.

Krsna, the Supreme Spirit, is never overwhelmed by illusion. So if we want to get free from illusion, we have to cry out for help from Him. That sincere call for the Lord to protect us is the chanting of the maha-mantra—Hare Krsna. Hare Krsna, Krsna Krsna, Hare Hare/ Hare Rama, Hare Rama, Rama Rama, Hare Hare.

By this chanting, which is exactly like the genuine cry of a child for his mother, we cleanse from our hearts the false consciousness that we are the lords of all we survey. As the illusions drop off, our true, happy, eternal spiritual consciousness revives. We return to our natural position as servants of the Lord, and ultimately the Lord reveals Himself when we sincerely chant this maha-mantra.

The chanting of Hare Krsna is not a material sound. It has nothing to do with cakras, oxygen levels, hypnosis, positive thinking, or anything merely mental or mechanical. Nor is the mantra to be chanted just for material benefits, such as wealth, fame, or even our daily bread. Hare Krsna is a purely spiritual sound, so it takes you at once to the spiritual platform, surpassing all lower stages of consciousness, whether sensual, mental, or intellectual.

Because the chanting is spiritual, anyone can benefit from it, regardless of material qualifications. It doesn’t matter whether you’re rich or poor, man, woman or child, red, white, black or brown, American or Indian, Muslim or Christian or Jew. The chanting will help all of us, because God’s names are purely spiritual and we’re all spiritual beings.

Of course, for a person deeply entangled in materialistic life it takes more time to clear material misgivings from the heart. But even such a materially engrossed person can come to the spiritual platform quickly by chanting Hare Krsna. 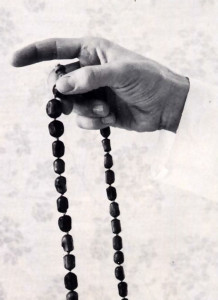 Chanting on a string of japa beads helps you concentrate on the Hare Krsna mantra and keep track of how much you’ve chanted.

The three words Hare, Krsna, and Rama are transcendental seeds of the maha-mantra. The words Krsna and Rama address the Lord Himself. Both Krsna and Rama mean “the supreme source of pleasure,” and Hare calls for the internal pleasure energy of the Lord. This energy helps us reach the Lord.

His Divine Grace A.C. Bhaktivedanta Swami Prabhupada, who brought this pure chanting of the names of God to the Western world, explained the meaning of the maha-mantra this way:

“O Lord, O energy of the Lord, please engage me in Your loving service.”

What we are praying for when we chant Hare Krsna is our return to our natural, blissful position as loving servants of the Supreme Personality of Godhead. No other means of spiritual realization is as effective in this age as the chanting of the maha-mantra:

Some Basic Rules For Chanting

1. The first rule of chanting is that there are no hard and fast rules. You don’t need beads to chant. You don’t have to be in a sacred place. You don’t have to sit, stand, or walk in a certain way. You can chant the holy names of God anywhere, anytime, even while going about your daily routine. Somehow or other, just try to chant Hare Krsna.

3. Steer clear of sinful activities. Basically, that means you should stay away from gambling, meat-eating, intoxication, and illicit sex. They’ll only slow down your spiritual progress.

4. Read some Krsna conscious literature daily. The more you learn of the glories of Krsna and the glories of His name, the more faith you’ll have in chanting Hare Krsna. The Bhaktivedanta Book Trust has published scores of books on Krsna, and you can read any of them for transcendental benefit. A good place to start is Bhagavad-gita As It Is, by His Divine Grace A.C. Bhaktivedanta Swami Prabhupada, the founder and spiritual guide of the International Society for Krishna Consciousness. 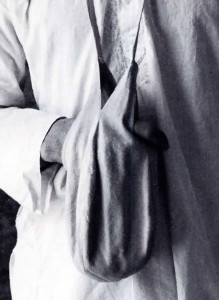 A bead bag protects your beads and lets you carry them anywhere.

Chanting Hare Krsna can be a festive group experience or a quiet, personal meditation. Singing the mantra out loud, by yourself or with others, is called kirtana. Chanting quietly to yourself is called japa.

This month, we’ll tell you about japa.

Devotees of Krsna meditate by chanting the Hare Krsna mantra on a strand of 108 beads, called japa beads. You can get these beads from your local Hare Krsna temple, or you can get them by sending (in the U.S.) $3.00 to ISKCON Educational Services, 3764 Watseka Avenue, Los Angeles, CA 90034.

How To Chant On Japa Beads

1. Hold the beads in your right hand.

2. There’s one head bead, a bead that’s bigger than all the rest. Grasp the first bead to one side of the head bead with your right thumb and the middle finger of your right hand. (Your index finger doesn’t touch the bead.)

3. Roll the bead back and forth between your thumb and middle finger and chant—Hare Krsna, Hare Krsna, Krsna Krsna, Hare Hare/ Hare Rama, Hare Rama, Rama Rama, Hare Hare. The word Hare is pronounced huh-ray. Krsna is pronounced krish-na. And Rama rhymes with the English word drama. Say each syllable of each word as clearly as you can. Concentrate your attention on the sound of each word of the mantra.

4. After you’ve chanted the complete mantra one time, move your thumb and finger to the next bead and chant the mantra again.

5. Chant on the next bead and then the next, until you have chanted on all 108 beads. You have now reached the other side of the head bead and have completed one full “round.”

6. Do not chant on the head bead, and don’t cross over it to continue. Instead, turn the whole set of beads around in your hand and chant in the other direction. The last bead of your first round is the first bead for your next. Chant on this bead, then the next. and then the next. Stop when you reach the side of the head bead again. Then you’ll have completed your second round.

7. Keep reversing directions in this way to chant your third and fourth rounds, and keep going. (How many rounds can you chant? Initiated devotees chant sixteen rounds a day.)

8. Treat your beads respectfully. Don’t let them touch the floor, your feet, or any unclean place. Don’t take them into the bathroom.

One final word. Try to find time to chant a fixed number of rounds every day. You can start with two rounds or even one—but chant regularly, without fail, preferably in the early morning. This regularity of chanting, coupled (if possible) with a regular program of study, will give you a firm basis for further progress in Krsna consciousness.

2 Responses to How To Chant On Japa Beads