On Vancouver’s most popular talk show,
an interview with the leader of the
Hare Krsna movement in Canada. 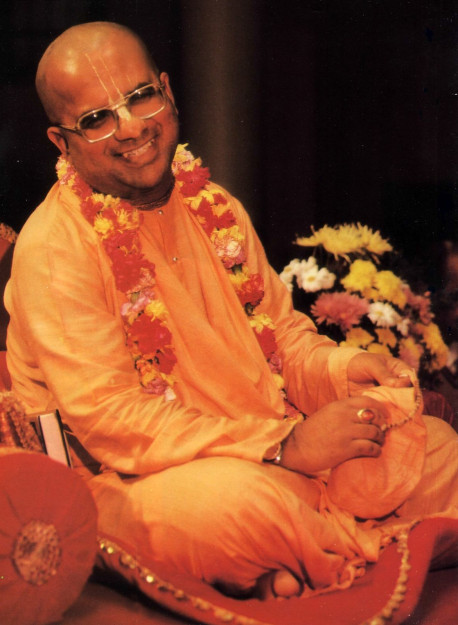 Laurier Lapierre: Good evening, sir, and welcome to our program. What is it that you do?

Gopala Krsna Goswami: I travel around the world preaching the message of Bhagavad-gita. I encourage people to take advantage of the human form of life and achieve liberation from the cycle of repeated birth and death in this world. This is what the Krsna consciousness movement is trying to do—propagate the ageless philosophy of the Vedas, which describe how human life should be led.

Mr. Lapierre: How relevant is that to us, who live in the age of the atom and instant communication?

The basic philosophy of the Bhagavad-gita is that when the body dies the soul doesn’t die. Whether one is living in a primitive age or in the modern age, one’s body is bound to die. But the soul lives eternally.

Mr. Lapierre: Does it take on another form eventually?

Gopala Krsna Goswami: It does. According to the Vedic scriptures, there are 8,400,000 different kinds of bodies.

Mr. Lapierre: How did you find that out?

Gopala Krsna Goswami: Well, there’s a lot in the scriptures that neither you nor the scientists will ever be able to discover.

Mr. Lapierre: You have to take it on faith?

Gopala Krsna Goswami: You have to have faith, but you can also test it out. For example, about twelve years ago Dr. Wilfred Bigelow, a world-famous heart surgeon at the Toronto General Hospital, stated in an interview published in the Montreal Gazette that after seeing people die for thirty-two years he was definitely convinced there was a soul. In his correspondence with His Divine Grace A.C. Bhaktivedanta Swami Prabhupada, the founder and spiritual master of the Hare Krsna movement. Dr. Bigelow acknowledged that what the Vedas are teaching is far superior to what modern science will ever discover.

Mr. Lapierre: And the end result of having a soul is what?

Gopala Krsna Goswami: Well, the real point is that we should utilize our human life correctly. The soul is our real identity. Just as you have a suit and trousers that are covering your body, you have a body that is covering your real self, the soul. The purpose of getting this human body is to act according to religious principles so that we can get out of repeated birth and death in material existence and return to the eternal kingdom of God, where we all belong.

Mr. Lapierre: What made you come to the movemen?

Gopala Krsna Goswami: I was in Montreal, doing my studies at McGill, and I was questioning the real purpose of human life. I had been searching for about two years, meeting spiritual leaders of various faiths, until I finally met Srila Prabhupada. That was in June of 1968. I asked him what the human form of life is -meant for. His answers were so satisfactory and so convincing that I eventually decided to adopt this way of life.

Mr. Lapierre: One problem your movement has is that you are lumped together as just another cult—a brainwashing one.

Gopala Krsna Goswami: Actually, we have a problem only with those who don’t take the time to study the Krsna consciousness movement. In fact, if you would take the time I could show you statements by leading Indologists around the world, including Dr. A.L. Basham [the world’s foremost Indologist], who have studied the Krsna consciousness movement and concluded that it authentically represents the Vedic culture.

Mr. Lapierre: So there is no “cult” involved? There is no brainwashing involved?

Mr. Lapierre: Another problem is that you walk down the street, take forlorn, sad souls, disappointed with life—young, impressionable—and drag them back to your temple, and after that they become Krsnas.

Gopala Krsna Goswami: Can you tell me that you are not disappointed with life?

Mr. Lapierre: Every day. Especially after the hangover I have. But I am not about to go out and put on your robes. I will stop drinking before that.

Gopala Krsna Goswami: But let us face reality. The reality is that everyone is disappointed with life, and the reason you turn to alcohol as a means of shelter is that you are also disappointed. But some are honest enough to admit it, and (excuse my frankness) some are hypocrites who do not want to admit they are disappointed. Those who don’t have the courage to face up to reality take shelter of alcohol, drugs, loose women, gambling, and other illicit activities.

Mr. Lapierre: We have been told by so many people, most of whom are crackpots, that they have the answer to life’s disappointments. I must have interviewed several people in the past two to three months who say they have the answer to life. Consequently, one wonders. Aren’t you just another one of them? Aren’t you just another crackpot who says he has an easy way out of life’s dilemma?

Mr. Lapierre: One last point: How do you reconcile all of this with the technology of modern life?

Anyone can serve Krsna. Krsna doesn’t say that you have to withdraw and move into the temple and shave your hair off, giving up your family. Remain where you are, but perfect your life by stopping sinful activities and making God the center of your life.

One Response to The Vancouver Show Hosts Hare Krsna Guru