Back to Godhead > Prabhupada > How Can Work Be Worship?

How Can Work Be Worship?

How Work Can Be Worship 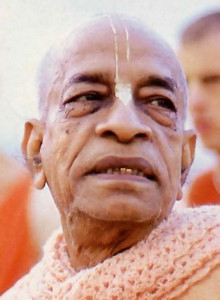 The following conversation between His Divine Grace A.C. Bhaktivedanta Swami Prabhupada and some of his disciples took place in June 1974 during an early-morning walk in Geneva.

Devotee: What does Krsna mean when He says in the Bhagavad-gita that we should be desireless?

Devotee: The nondevotee also says he knows what he wants, but he says, “I can accomplish the same good results without Krsna.”

Srila Prabhupada: Then he is a fool, because he does not know what “good results” really are. Today he is struggling very hard for one “good result,” but tomorrow he’ll desire something else, because he must undergo a change of body when he dies. Sometimes he’s taking the body of a dog and desiring one “good result,” and sometimes he’s taking the body of a demigod and desiring another “good result.” Bhramatam upary adhah: he’s wandering up and down the universe, just like . . . what is that?

Srila Prabhupada: Yes. Sometimes he is rising to an elevated position, and then again he must come down and take the body of a dog or hog. This is going on.

“After wandering up and down the universe for many lifetimes, one who is very fortunate comes to devotional life by the mercy of the spiritual master and Krsna.”

Srila Prabhupada: Yes, but we are opening schools that teach Krsna consciousness, while your schools are teaching illusion. The problem is that the rascals cannot understand the difference between bhakti [devotional service] and karma [material activity]. Bhakti looks like karma, but it’s not karma. In bhakti we also work, but for Krsna’s sake. That is the difference.

For example, Arjuna fought in the Battle of Kuruksetra, but because he fought for Krsna he is accepted as a great devotee. Krsna told him, bhakto ‘si me . . . priyo ‘si me: “Arjuna, you are My dear devotee.” What did Arjuna do? He fought, that’s all. But he fought for Krsna. That is the secret. He did not change his fighting capacity as a warrior, but he changed his mentality. At first he was thinking, “Why shall I kill my kinsmen? Let me leave the battlefield and go to the forest and become a mendicant.” But Krsna wanted him to fight, so at last he surrendered and did it as a service for Krsna. Not for his own sense gratification, but for Krsna’s sense gratification.

Devotee: So sense gratification is there even in devotional service?

Another example is the behavior of the gopis [Krsna’s cowherd girlfriends]. Krsna was a beautiful boy and the gopis were attracted to Him. They wanted Him as their lover, and they went out from their homes in the middle of the night to dance with Him. So it appears that they acted sinfully—but they did not, because the center was Krsna. Therefore Caitanya Mahaprabhu recommends, ramya kacid upasana vraja-vadhu-vargena ya kalpita: “There is no better mode of worshiping Krsna than that practiced by the gopis.“

But the rascals think, “Oh, this is very good. Krsna danced in the middle of the night with other men’s wives, so let us also gather some girls and dance, and we will also enjoy like Krsna. “This is a gross misunderstanding of Krsna’s pastimes with the gopis. To prevent this misunderstanding, Srila Vyasadeva [the author of the Srimad-Bhagavatam] has devoted nine cantos of the Bhagavatam to describing Krsna’s position as the Supreme Personality of Godhead. Then he gives a description of Krsna’s behavior with the gopis. But the rascals jump immediately to the Tenth Canto, to Krsna’s dealings with the gopis. In this way they become sahajiyas [imitators of Krsna].

Devotee: Will such persons experience a change of heart, since they’re somehow or other associating with Krsna?

Srila Prabhupada: No. Kamsa also associated with Krsna—but as an enemy. That is not bhakti. Bhakti must be anukulyena krsnanusilanam: favorable devotional service. One should not imitate Krsna or try to kill Him. That is also Krsna consciousness, but it is not favorable and therefore it is not bhakti. Still, the enemies of Krsna get salvation, because they have somehow or other thought of Krsna. They get impersonal liberation, but they are not allowed to enter into the pastimes of Krsna in the spiritual world. That benediction is reserved for those who practice pure loving devotion to Krsna.