Back to Godhead > Devotees > Devotee Hairdresser Breaks All the Stereotypes

Devotee Hairdresser Breaks All the Stereotypes

Devotee Hairdresser Breaks All the Stereotypes

By Carol Edgar (Reprinted From the Dallas Observer) 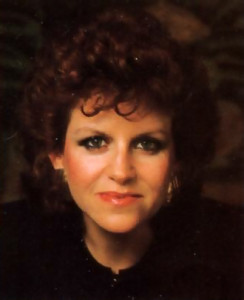 Dallas—If you happen to be among the multitudes flocking to Kalachandji’s, the new Hare Krishna gourmet vegetarian restaurant winning rave reviews, and you go on Saturday night, you’ll probably be greeted by a Hare Krishna who breaks all the Hare Krishna stereotypes.

Her name is Elaine Dodson. At Kalachandji’s, where she volunteers as hostess Saturday evenings, you’ll see her dressed in the traditional sari, her head covered in deference to her faith. Away from the restaurant and the temple, she sheds the religious garb for trendy street clothes and make-up in keeping with her work. Dodson is a hair stylist and consultant on matters regarding beauty and health. The day we visited her in her studio just south of Nostromo on Travis, she was dressed in a bright teal-colored suit, her hair a flaming orange—certainly not what you’d expect of a Hare Krishna devotee.

“I’m their best PR,” Dodson admitted from her studio, which is elaborately decorated in bright-colored prints. “I grew up here in Dallas—was raised a Baptist like everyone else. But when I became an adult I realized I didn’t have the philosophical answers I wanted. So I started searching. Let’s see, I went from Baptist to Unity to Eastern religions. I studied a lot of philosophy and learned a lot about Eastern thought.

“Then I met a guy from India who took me to the Hare Krishna temple. At first I thought it was too strange, but the more I investigated the faith, the more I realized how much it offered.

“Actually, it’s a form of bhakti-yoga,” Dodson explained. “The idea is to have total control over the senses. Listen, the hairdresser world gets pretty wild, and I needed something to ground me.”

“So how do you get control over your senses?” we asked, certain we wouldn’t like the answer.

“Well, we have four basic principles,” Dodson said. “Number one is no illicit sex. That means no sex outside marriage and sex within marriage only for the purpose of conceiving a child.”

“So you’re celibate?” we asked incredulously, knowing that Dodson is divorced.

“Yes,” she said cheerfully, “and I’ll tell you in a minute how I do it. The second principle is no drugs of any kind, which includes nicotine, caffeine, and other more common drugs and not just the hard stuff. The third is no gambling. And the fourth is no meat, fish, or eggs, since killing things upsets your karma.”

We were stuck on rule number one and asked Dodson how she keeps herself chaste.

Dodson’s religion pervades her life. She believes that outward beauty starts from the inside, and she urges vegetarian foods, herbs, and vitamins on her customers.

“Do you proselytize them too?” we asked, noting a pink etagere stacked with pamphlets.

“Well,” she said, “people get pretty close to their hairdressers. And it’s impossible to get to know me without knowing that I’m a Hare Krishna. If they’re interested, I’ll tell them more.” 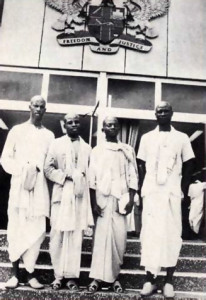 Accra, Ghana—At the invitation of the Ghanian government, the Hare Krsna movement recently sent a delegation of devotees to a two-day conference in the state house here. The theme of the conference, the first of its kind in this country, was “How Can Religion Best Help Ghana?”

Asked to open the conference with congregational chanting of Hare Krsna, the devotees gladly complied, delighting the delegates from seven hundred religious organizations for an hour and a half. (Many enthusiastically joined in.)

Later Maha-mantra dasa, the spokesman for the group, addressed the assembly. Responding to the question “How can religion best help Ghana?” he explained that the chanting of God’s holy names is the only way to counteract the ills of today’s world, which are the effects of the present Age of Quarrel. He said that by vigorously propagating the science of God consciousness, beginning with the chanting of Hare Krsna, the government of Ghana would find peace, prosperity, and true happiness flooding the country.