Back to Godhead > ~Featured~ > Who’s the Brains Behind this Operation?

Who’s the Brains Behind this Operation? 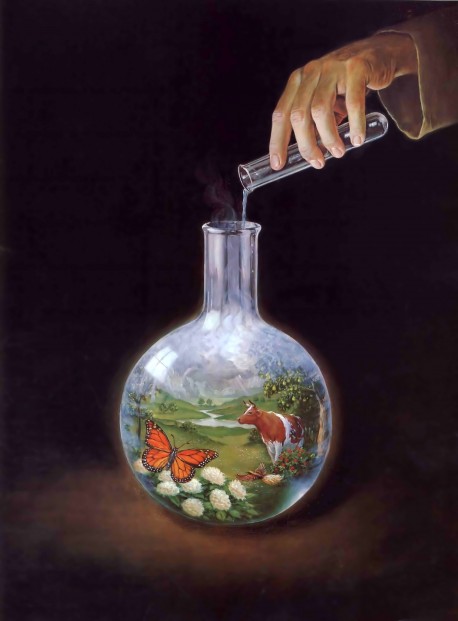 People ask this question every day, about everyday things. But when it comes to things cosmic, should we ask “Who”-or “What”? The Caracas Metaphysical Society interviews His Divine Grace A.C. Bhaktivedanta Swami Prabhupada.

Srila Prabhupada: Now let us discuss this: What is “limited”—and what is “unlimited” ?

Metaphysical Society: This material world is a combination of many different elements—intelligence, mind, so on and so forth—and in the center of all this is the essence, which is eternal. And this eternal thing cannot have any name or any form, because then it would be limited. And that would be a contradiction.

Srila Prabhupada: No. This material world is temporary, but spirit is eternal—that is clear understanding. The material elements are earth, water, fire, air, sky, mind, intelligence, and ego; and the spiritual element is utilizing these material elements. That is the distinction between matter and spirit.

Srila Prabhupada: So that is the difference between “limited” and “unlimited.” You and I are living beings, and we can create something limited, like this microphone or big airplanes. But there is another living being who has created innumerable planets that are floating in the air. Is it not so? We have taken the credit for becoming big scientists and creating the 747 airship, which can carry five hundred passengers. But how many have we created? Maybe several hundred or several thousand. But there are millions and trillions of planets floating in the air, just like the 747s, and those planets contain many big mountains and oceans. So we can create limited things with our limited brains, but the supreme being can create unlimited things because He has an unlimited brain.

Metaphysical Society: Are you suggesting that God has a brain?

Srila Prabhupada: Yes. And as soon as we understand that He has a brain, we know that He is a person. Therefore, God is a person, ultimately. Just as the government is impersonal, but the president is a person, similarly the energies working the cosmic manifestation are all impersonal, but the brain behind them is personal. That is the distinction between person and “imperson.”

Metaphysical Society: You said that God is a person, ultimately. What do you mean, “ultimately”?

Metaphysical Society: Why do you say that God is more important than His energy?

Metaphysical Society: All of them are important.

Srila Prabhupada: All of them. That’s all right. But comparatively, since the sun-god is the source of all heat and light, he is the most important. Similarly, God is expanding His energy throughout all the universes. God is the energetic. Comparatively, although in one sense there is no difference between the energy and the energetic, the energetic is more important than the energy. So God and His energy are simultaneously one and different. That is our philosophy.

Metaphysical Society: You said that God expands Himself. But this implies that God modifies or changes Himself.

Metaphysical Society: How can we understand the difference between God’s personality and individuality, and our own? If God expands Himself into everything, then He must be inside all of this creation. 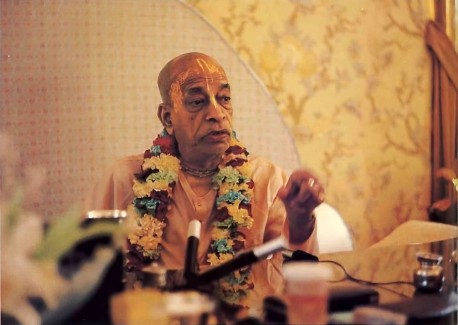 Metaphysical Society: But since God is pure spirit, or atma, and we are also pure spirit, can we not eventually evolve up to the level of God?

Srila Prabhupada: No. We admit that God is spirit and you are spirit, but God’s power and your power are not equal. God said, “Let there be creation,” and there was creation. But if you say, “Let there be capati [bread],” there will be no capati unless you work. You have to work for it.

Metaphysical Society: God is the whole, and we are the parts, and we are evolving to integrate ourselves with that whole.

Srila Prabhupada: That’s all right, but you can never become the whole.

Metaphysical Society: But we are in evolution.

Srila Prabhupada: No. The part is a part eternally, and the whole is the whole eternally.

Metaphysical Society: So one does not integrate himself with the whole when one becomes evolved?

Srila Prabhupada: No. You are already in the whole.

Metaphysical Society: Therefore, we are all one.

Metaphysical Society: So we are forever a part of the whole?

Srila Prabhupada: Yes. As Krishna says in the Bhagavad-gita [15.7], mamaivamso jiva-loke jiva-bhutah sanatanah: “The living entities in this conditioned world are My eternal, fragmental parts.”

Srila Prabhupada: Yes. There is no difference between consciousness of Christ and that of Krishna, provided one follows Christ’s orders. Christ spoke as the son of God, and Krishna is speaking as God, so there is no difference in their teachings. Whether the father speaks it or the son speaks it, the truth is the same.

Metaphysical Society: How do we chant Hare Krishna?

Metaphysical Society: What is the meaning of this Hare Krishna mantra?

Srila Prabhupada: Hare means “the energy of God,” and Krishna and Rama are names of God. So the mantra means, “Oh, God, I have fallen into this material world. Kindly accept me again.” That’s all.

Metaphysical Society: From my point of view, your repetition of this mantra over and over again is something like hypnotism. For example, some tribes also chant during various rituals.

Srila Prabhupada: That is your opinion; you are not an authority.

Srila Prabhupada: This is the statement in the Bhagavad-gita [9.14]:

“Always chanting my glories, endeavoring with great determination, bowing down before Me, these great souls perpetually worship Me with devotion.” So Krishna says directly, satatam kirtayanto mam: “Always chant My name.” It is not that we can chant anything and still receive the same benefit.

Metaphysical Society: I always understood from Indian philosophy that you cannot give God a name because that would be limiting God.

Srila Prabhupada: As soon as you come to the material world you must experience the duality of pain and pleasure. We can all appreciate this very easily. Take cold water, for example. Cold water is sometimes painful and sometimes pleasing, is it not? The water is the same, but in winter it is painful and in summer it is pleasing. How can the same thing be both pleasing and painful? Because of changing circumstances. The same thing is either pleasing or painful under different circumstances. Similarly, fire is also sometimes pleasing and sometimes painful. The fire is the same, but circumstantially it becomes painful or pleasing. In the winter season the fire is pleasing, and in the summer season the same fire is painful.

Metaphysical Society: You said that we have a material body and also a spiritual body. Are the spirit and matter born simultaneously; or is matter born first, and then the spirit comes?

Srila Prabhupada: From spirit, matter has come. God said, “Let there be creation.” God is spirit and creation is matter—so God was there, and material creation came later on.

Metaphysical Society: Why does the spiritual body become covered by the material body?

Srila Prabhupada: When one goes to prison he has to put aside his usual dress and take the prison dress. Similarly, anyone who comes into this material world has to take a material body. This is the law. Unless you have this material body, how can you feel pleasure in material sense enjoyment? It is just like performing on stage: if you are going to play a certain part, you have to dress accordingly. Therefore, this material body is compared to a dress. For example, every lady and gentleman sitting here—every one of us—has a different dress.

But if you miss this opportunity to understand God, then again you will be put into the cycle of the evolutionary process. We should not, therefore, misuse this human form. We should utilize it properly to understand the unlimited God and our relationship with Him, and to act on this knowledge. That is the perfection of life.

Metaphysical Society: Thank you very much for speaking with us.