Back to Godhead > Devotees > Preaching > In India > The Wedding Voyage 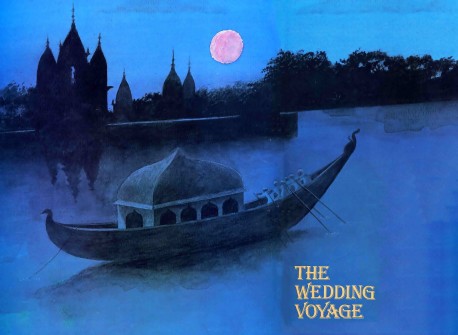 It was the eve of Rajoman’s wedding day. In joyful anticipation he put on his finest silk turban, tunic, and robes, and then his most precious jeweled ornaments. As he rushed to join his father and friends, he heard them calling, “Rajoman! Please hurry! It’s getting late and we have a long journey before us! We have to reach Gudara, your bride’s village, before morning!” Just then the lad emerged from the house, and the group went on their exuberant way.

In Bengal, India, the scene of our story, there are many rivers. The sacred Ganges floods the plain, reaching out to the sea like a hand grasping with outstretched fingers. Approaching one such river at nightfall, Rajoman’s party saw some boatmen clustered around a campfire.

“Ho! Boatmen!” Rajoman’s father called out. “Take us to the village of Gudara and you’ll earn a week’s wages in one night!”

The head boatman looked over the well-dressed group and said, “You’re going to a wedding?”

“Certainly! Can’t you see how my son has become a great lord today? But tomorrow,” the father laughed, “he shall become the slave of the beautiful maiden Opal!”

“Ha ha! Well, climb aboard, you happy people! We’ll get you to Gudara by morning, for we have a fair wind to help us, and strong backs as well!”

Now the marriage party boarded the simple but sturdy craft. Tired from the evening’s walk and lulled by the boatmen’s rhythmic rowing, Rajoman and his companions soon fell asleep.

As soon as the new day dawned, the young bridegroom awoke. But his excitement turned to anger when he raised his head and glanced toward the riverbank.

“Look!” he shouted. “We haven’t even moved a yard from where we were last night! What do you say, boatman?! Are you playing games with me?! If so, you’re in for trouble!”

“Now hold on!” the boatman replied. “Don’t forget that we’ve been working hard all night long—while you slept. I’m as perplexed about this as you are!”

Then, from the stern of the boat, Rajoman’s father cried out, “Look here! I’ve solved the mystery! All this time the anchor’s been sunk into the riverbed!”

Our human body is like a boat, and the success of our voyage depends on how we use our mind—as an anchor, or a rudder. If we keep our mind sunk into self-serving, we’ll stay moored here in this world, lifetime after lifetime. If we keep our mind engaged in serving the Supreme Lord, then we’ll have smooth sailing to spiritual enlightenment.