Political Piety And The Laws Of God

Political Piety And The Laws Of God 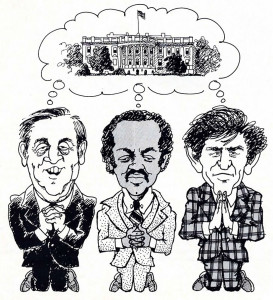 “For nearly two hundred years, the U.S. Congress has begun its daily deliberations with prayer,” states an article in The Oregonian. “Out of 100 Senators, perhaps five show up each morning. … In the House, where the proceedings are televised, the turnout is higher—maybe 20 out of 435. Of those who do show up, virtually none come for the prayer.”

The article continues: “Congressional prayer—scorned in practice as a neutered, meaningless exercise in piety—is endorsed piously by politicians as evidence of their virtue. The voters are supposed to fall for the logic once endorsed by [journalist] A. J. Liebling: ‘Man go to church—good man, no lie. Man not go to church—bad man, lie.'”

While politics is not synonymous with atheism, religion has lost much of its credibility in the political arena. Aside from praying to win an election, most politicians have little interaction with God.

And yet nearly all of us would admit that the qualities promulgated by the religious way of life—be it Judaism, Christianity, Islam, or Hinduism—are indeed desirable. In fact, a brief mention of these qualities would convince most people that they are valuable not only in the realm of politics but in every facet of life. Consider, for instance, the qualities of cleanliness, truthfulness, austerity, mercy, and devotion to God. These nonsectarian qualities are espoused by every religious system. If everyone were endeavoring to attain these attributes, the world would be a better, safer place. In other words, politics and God consciousness are not mutually exclusive but share many of the same goals.

Modern politicians may understand this fact to some extent. Democratic presidential candidate Jesse Jackson is, after all, a reverend, and many leaders have given more than just lip service to the importance of religion. But nonsectarian religious principles should in fact have the most prominent place in every leader’s adminstrative policy and in every candidate’s campaign platform. According to the Bhagavad-gita and other world scriptures, the Supreme Lord is the supreme leader. He is the proprietor of all planets and all lands. Just as in America, state leaders are obliged to enforce the laws of the federal government, so each and every leader on earth is obliged to promote and enforce the laws of God. If leaders don’t do this there can be only chaos, just as there would be chaos if a state decided to secede from the Union.

It is right and proper to insist that our leaders refrain from propounding one religious tradition and discriminating against another. The purpose of separation of Church and State is to prevent such discrimination. But while it is correct to separate Church and State, we should clearly understand that there is no question of effective government without following the laws of God. 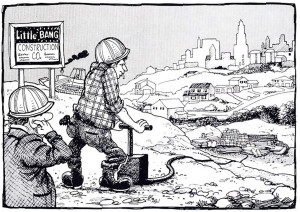 One familiar and morbidly ironic feature of the nuclear arms race is that both sides publicly claim they are building up their arsenals only to keep the peace—to keep the other side from attacking. “A nuclear war can never be won, and must never be fought,” said President Reagan in a speech last fall, and the sentiment is echoed by leaders in the Kremlin. But each party, accusing the other of being an incurable aggressor, and following the logic that “the best defense is a good offense,” continues to expand its nuclear stockpile.

Observing this apparently sincere desire of both the Soviet Union and the United States to avert a nuclear holocaust—and strongly suspecting their equally apparent inability to do so—we should ask ourselves what it is that drives them on, keeping a meaningful and lasting arms agreement out of reach.

Sound apocalyptic? Maybe. But it is certainly not unreasonable to say that the arms race is horrible and unbeneficial. And the Gild, to support its prophetic warning, enunciates the three basic principles of materialism that have fostered our modern nuclear face-off. Let us consider these principles and some of their implications.

The first principle is anisvaram, which literally means “without a controller.” Materialists do not believe there is a person who created the universe and controls its systematic movements. To them, the orbiting of the planets, the regular changing of the seasons, the intricate structure of living bodies—in short, the design evident in all corners of the visible world—does not indicate a supreme designer.

One of the most popular materialistic theories of how the universe came to be is the Big Bang theory. According to this theory (or one version of it), a primordial explosion led somehow to the formation of hydrogen and helium, and gradually the entire universe took shape.

No one, of course, has ever observed an explosion create anything (except chaos). Whether you use a keg of gunpowder, a grenade, or an atom bomb, explosions only destroy. Proponents of the Big Bang, to be able to prove their theory, ought to be able to create something—even a simple structure like a toolshed—with explosives. But they can’t.

At least within our practical experience, it is people, not explosions, that create. People create skyscrapers, cities, highways, toolsheds and so on. Therefore if we are to logically and scientifically formulate a theory of the creation of the universe, we should lean toward what we can call the Big Person theory, or the theory that God, the supreme person, is the creator.

The only difficulty with the Big Person theory is that it obliges us to recognize a person far greater—and therefore more worshipable—than ourselves. This is always too much to ask of a materialist.

The second principle of materialism described in the Bhagavad-gita is apratistham, which means “without a foundation.” Every structure has a foundation. A house, for example, rests upon a foundation of concrete, or upon the earth itself. Take away the foundation, and the structure can’t stand.

But materialists say that there is no soul, no foundation, and that life is no more than a combination of material elements.

The theory of evolution, for example, is based on the idea that life arose from a random mixture of material elements in a “primordial soup.” By chance this soup produced simple one-celled organisms, which in their turn evolved into plants, animals, apes, and finally human beings. And human society, according to this theory, has evolved from primitive, superstitious, and religion-oriented cultures to the modern cultures of the twentieth century. Coincidentally enough, the materialists who invented this elaborate theory place themselves—or modern man—at the top of the evolutionary ladder—as the most intelligent and civilized beings who have ever existed. In the Gild, therefore, Lord Krsna, the Supreme Personality of Godhead, explains that one of the primary characteristics of materialists is conceit.

The third principle of materialism is asatyam, which means “unreal.” This final principle follows from the previous two. In reality, every structure has both a creator and a foundation. In asserting that the universe has neither, the materialist is saying, in essence, that it is unreal. From the materialistic viewpoint, the entire world is ultimately a phantasmagoria, a moving dreamland without any reason or purpose, in which we may do as we like without any fear of consequences. Since there is no soul, we need only enjoy this life without worrying about a future one. And since there is no God, or supreme authority, who can punish us for even the most atrocious acts?

But although the materialists ultimately say that the world has no meaning or purpose, their purpose is clear: to enjoy without restriction. “They believe,” the Gita says, “that to enjoy the senses is the prime necessity of human civilization.” In fact, the purpose of all three fundamental materialistic principles is to clear the way for unrestricted, animalistic sense enjoyment.

“Well and good,” says the materialist. “What’s wrong with that?” But the consequences of materialism are disastrous. Driven by the desire for sense gratification, materialistic men can rationalize anything. Abortion, for example, is prominent all over the world because the materialist denies that the soul is present in the womb from the moment of conception, causing the fetus to grow. If life is just a combination of material elements, then why not kill the child in the womb—or even when it is newly born?

Pursuing a materialistic line of reasoning, we could also conclude that the loss of human life from, say, the firing of a few hundred nuclear missiles is not more significant than the destruction of the missiles themselves. If both the missiles and the human beings are but different combinations of the material elements, then why should anyone be upset if we use one to destroy the other?

In fact, if we strictly adhere to the principles of materialism, we are forced to conclude that law, religion, morality, and justice are only so many arbitrary standards, created by various individuals who are themselves only random mixtures of the material elements. In other words, materialism renders meaningless all standards of human behavior. Lord Krsna, therefore, describes the materialist as “demoniac.”

Demoniac people grow more and more violent as they compete for the resources of nature. Thinking that at the time of death everything is finished, they have no qualms about violence, and therefore there is constant threat of war between demoniac nations. Those in favor of nuclear buildup insist that the continued manufacturing of nuclear weapons will result in a balance of power. And this balance of power, they say, will in turn serve as the foundation for a peaceful and prosperous world. So at both ends, it seems—from their primordial Big Bang to their twentieth-century arms race—the demoniac are devout believers in explosions and explosives and have no faith in Krsna and His instructions in the Bhagavad-gita.