Back to Godhead > ~Featured~ > The Miracle of Mayapur

The Miracle of Mayapur

The Miracle of Mayapur

The annual meeting of Krsna devotees at Lord Caitanya’s birthsite
serves as an inspiration for the spiritual rejuvenation of human society.

On the Ganges plain ninety miles north of Calcutta, the world headquarters of the International Society for Krishna Consciousness (ISKCON) rises in Mayapur, the land of Lord Caitanya’s birth. The beautiful gardens and the first buildings of the Mayapur project provide a warm welcome for visitors. 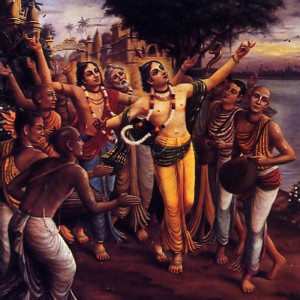 Sri Caitanya Mahaprabhu, the Supreme Personality of Godhead, danced and chanted throughout Mayapur and the surrounding are as. Accompanied by His many followers. Lord Caitanya invited everyone to join the chanting of the holy names.

Each Spring hundreds of ISKCON devotees from around the world gather at ISKCON’s center in Mayapur, West Bengal, to celebrate the birth of Lord Sri Caitanya Mahaprabhu. Lord Caitanya, who appeared in Mayapur in a.d. 1486, is the Supreme Personality of Godhead, Krsna Himself, playing the part of His own devotee; thus He teaches us that the pleasure of serving Krsna is so great that Krsna Himself desires to experience it. In this Age of Kali (quarrel and hypocrisy), when many ordinary men claim to be incarnations of God and exhort their followers to aspire to become God, the Supreme Person presents Himself as a humble servant of the Lord. Lord Caitanya stressed the chanting of God’s holy names as the most effective means of self-realization in this age, and He predicted that the chanting of Hare Krsna would spread from the land of India—where He personally traveled and preached—to every city, town, and village in the world. Four hundred years later Bhaktivinoda Thakura, a great devotee of Lord Caitanya, prophesied that people from all corners of the globe would gather in Mayapur to chant Jaya Saci-nandana! Jaya Saci-nandana!: “All glories to Lord Caitanya, the son of mother Saci.” 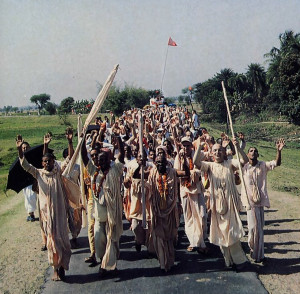 Following exactly in Lord Caitanya’s footsteps, ISKCON devotees gather each year to chant. dance, and visit the places associated with the Lord’s pastimes.

His Divine Grace A.C. Bhaktivedanta Swami Prabhupada, the founder and spiritual master of ISKCON, fulfilled both predictions—by spreading the Hare Krsna movement to the West, and by arranging for his followers to come to Mayapur each year. Srila Prabhupada envisioned a thriving spiritual city, centered on the world’s largest temple, rising from the Mayapur farmlands. Mayapur, he explained, would be famous, both as an international center for spiritual education and as the capital of the Hare Krsna movement. Before passing away in 1977, Prabhupada initiated the practical fulfillment of his vision by seeing to the construction of two large, modern guesthouses to accommodate Western visitors. These two buildings, along with the elegant memorial to Srila Prabhupada now being built by his disciples, dominate the beautiful Mayapur countryside today. 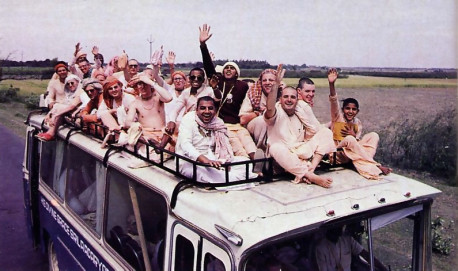 Whether by bus or on foot, the daily outings are a transcendental experience. 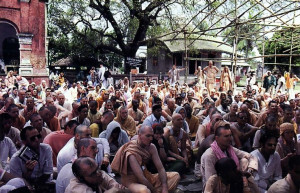 At the birthsite of Lord Caitanya, devotees listen attentively to a discourse on the Lord’s mission in the material world. The tree under which Lord Caitanya took birth is in the background.

ISKCON members come to the annual festival not only to visit this most sacred place of pilgrimage but also to make plans for expanding the Krsna consciousness movement in the year ahead. At this time, ISKCON’s Governing Body Commission (G.B.C.) meets to discuss such important matters as the printing (in some forty languages) and distributing of Srila Prabhupada’s books, the construction of new temples, and the coordination of ISKCON’s Food for Life program. At this year’s meetings the G.B.C. devoted considerable time to preparations for the celebration of the 500th anniversary (coming up in 1986) of Lord Caitanya’s appearance. At that time, many additional Western guests and reporters, along with dignitaries from both local and foreign governments, are expected to visit ISKCON’s Mayapur project. As part of the publicity campaign for that festival, devotees representing thirty nations will tour India on foot, carrying the flags of their respective countries. 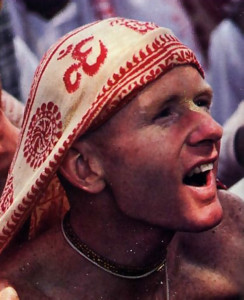 After the discourse, a devotee joins the ecstatic
chanting of Hare Krsna.

Another feature of the yearly festival is workshops and seminars on all aspects of the Krsna consciousness movement. Devotees from five continents gather to exchange ideas and to share their experience in devotional cooking, magazine publication, Deity worship, temple management, and in presenting Krsna consciousness to students, government officials, the press, and people in general.

These workshops—and the Mayapur festival as a whole—confirm Srila Prabhupada’s frequent assertion that ISKCON is succeeding where the United Nations has failed. Since the founding of the United Nations, international conflicts have actually increased, because no one has yet found a platform of common interest for all peoples. Srila Prabhupada, however, offered everyone the nonsectarian spiritual science of Krsna consciousness, which can help people of any nationality or religious faith reestablish their eternal, loving relationship with the Supreme Lord. It is on the basis of this science that men and women from a wide variety of backgrounds gather at Mayapur and confer on a unified strategy for the spiritual rejuvenation of human society. 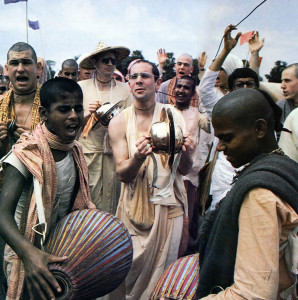 The sound of mrdanga drums and hand cymbals fills the air as devotees from East and West join Srila Ramesvara Swami (center) and Srila Harikesa Swami (with hat), two of ISKCON’s present spiritual masters, in a joyous kirtana.

Throughout the festival thousands of pilgrims from India and Bengal flock to the ISKCON center to see the temple and gardens and to meet the Western devotees. They are surprised and delighted to hear that India’s Vedic culture has taken root abroad. Although India has long been famous as the land of religion and spiritual culture, never before have so many Westerners understood and accepted the essence of the Vedic teachings: surrender to Lord Krsna, the Supreme Personality of Godhead. Srila Prabhupada would often say that although Eastern and Western culture are in some ways different, their combination through Lord Caitanya’s movement would produce some wonderful results. Visitors happily observe some of those results in Mayapur—both in the temple grounds and in the many hundreds of foreign devotees. 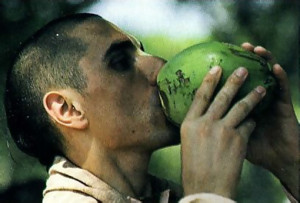 All the singing and dancing calls for refreshments, and the devotee belows lakes his thirst with Mayapur’s favorite drink-fresh coconut milk .

ISKCON devotees are in their turn delighted to see firsthand how the Krsna consciousness movement has not only a long history in India but also an overwhelming following among the Indian people today. Devotees preaching in their own countries find that most of their countrymen have never heard of Lord Krsna or Lord Caitanya, have little understanding of the simple, spiritual way of life, and sometimes greet Krsna devotees with apprehension. But in Mayapur the Western devotees meet many Indians who have practiced Krsna consciousness since early childhood, and who are glad to see Westerners adopt the Vedic culture. Devotees greet the steady flow of guests with books and magazines in Hindi and Bengali, and with generous distribution of sumptuous krsna-prasadam (food offered to Krsna). As the birthday of Lord Caitanya approaches, the crowds swell to half a million a day, and the joyful meeting of East and West continues throughout the evening and into the night. 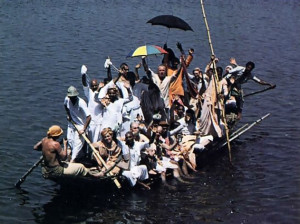 At least half the fun is getting there. On an excursion to the home of Bhaktivinoda Thakura, a great nineteenth-century leader of the Krsna consciousness movement, devotees paddle across the Jalarigi River.

The week-long festival includes excursions each morning by bus, by boat, and on foot to places where Lord Caitanya enacted His pastimes five hundred years ago. The Lord’s birthplace, the house where He and His associates met each evening to congregationally chant the holy names, and the homes of certain other of His associates remind the pilgrims of the importance of the Supreme Lord’s appearance in this material world. According to the Bhagavad-gita, Lord Krsna descends whenever true religion declines and irreligion increases. 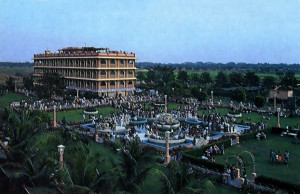 Eager crowds of pilgrims from all parts of India flock to the Mayapur temple, where they are warmly received with spiritual food, transcendental books, and singing of the holy names during the week -long festival to celebrate Lord Caitanya’s birth.

True religion means obedience to the laws of God, and God Himself comes not to favor a particular religious group but to reestablish His laws for humanity. The Srimad-Bhagavatam, the topmost Vedic literature, explains that the four principles common to all true religions are cleanliness, mercifulness, austerity, and truthfulness. Cleanliness is destroyed by illicit sex, austerity by intoxication, mercy by the slaughter of animals, and truthfulness by gambling. True religion, therefore, must prohibit illicit sex, meat-eating, intoxication, and gambling, while at the same time promoting the glorification of the Supreme Lord. If the members of the world’s religions were to follow these four essential restrictions and to chant God’s holy names, then all sectarian religious fighting would end and the world would realize the peace, prosperity, morality, and love of God that all religions espouse. 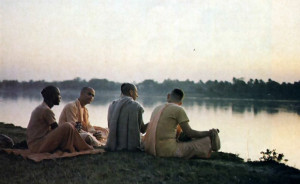 The bank of the Ganges on a mild evening is the perfect setting for devotees to gather and talk about the glories of Lord Caitanya.

For a devotee, seeing the places where Lord Caitanya performed His pastimes serves as a potent reminder of His life, His teachings, and the purpose of His appearance. In fact the entire mood of the Mayapur festival is one of intense remembrance and appreciation of Lord Caitanya through hearing about Him and seeing His earthly abode. This remembrance of the Lord combines with an expanded appreciation of Srila Prabhupada—who brought the teachings and abode of the Lord within the reach of every human being—to make the Mayapur festival a blissful, transcendental experience. The devotees aspire for nothing more than to share this experience with everyone.