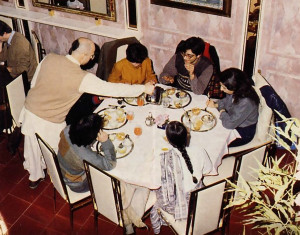 The entire family can enjoy a multicourse dinner of krsna-prasadam at the sparkling new Govinda restaurant in Milan, Italy.

The downstairs area of the restaurant seats forty and includes a boutique featuring Indian paintings and crafts. Upstairs, there are two VIP dining rooms. There is even a recording studio on the premises for Radio Krsna Centrale, Italy’s fast-growing Krsna conscious radio network.

Operating as a private club, Govinda had over 1,500 members, including the mayor of Milan, only two months after opening. Each Monday evening the restaurant hosts conferences on yoga, reincarnation, Indian culture, and various themes from the Bhagavad-gita. Many guests purchase Srila Prabhupada’s books and invite devotees to their homes to learn more about Krsna consciousness.

Govinda in Milan is one of more than thirty ISKCON restaurants around the world that promote the cause of vegetarianism by serving delicious prasadam—food offered to Lord Krsna. In addition to opening restaurants, ISKCON devotees have, since 1966, served out over 150 million nourishing free multicourse dinners, founded over thirty vegetarian farm communities, provided vegetarian food relief to the hungry in Asia, Africa, and the West, and widely publicized the value of a spiritual, vegetarian diet through books, magazines, and films. Also, many devotees of Krsna have begun prasadam businesses, producing a wide variety of natural, nutritious, vegetarian foods.

All this makes ISKCON a very strong and well-organized force for vegetarianism. Scott Smith, the associate editor of Vegetarian Times, has written, “The International Society for Krishna Consciousness is doing a superb job of letting people know that vegetarian food is healthful, delicious, and pleasing to the eye. . . . They [the devotees] are master cooks, their food is stunningly delicious, and they cannot be praised enough for their success in promoting the cause of vegetarianism worldwide.”

“It is gratifying to note that Srila A.C. Bhaktivedanta Swami Prabhupada took upon himself the magnificent task of editing this monumental scripture, Srimad-Bhagavatam, with transliteration, a lucid translation, and a very illuminating exposition in the form of English purports, written with sympathetic understanding…. Its abiding values and ennobling spiritual thoughts can give correct leadership to mankind in the midst of sickening contemporary problems.” 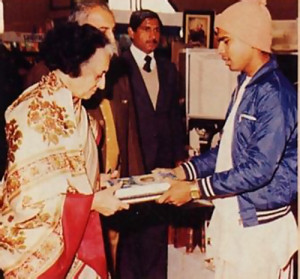 “Hare Krsna,” the prime minister said, and Haridasa dasa, the first Muslim to become a Hare Krsna devotee in India, presented her with part three of the First Canto of the Srimad-Bhagavatam, a Vedic classic. In this volume His Divine Grace A.C. Bhaktivedanta Swami Prabhupada, the founder-acarya of ISKCON, writes about the duties of a head of state.