Back to Godhead > ISKCON > Temples > Setting Sail with Transcendental Treasures

In the spirit of Srila Prabhupada’s voyage to America in 1965,
devotees are bringing Krsna consciousness to the Hawaiian Islands. 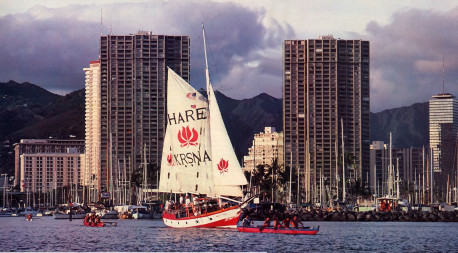 I awoke to the sound of waves lapping near my head. Through the two skylight windows above my bunk I could see wispy clouds that seemed to bob rhythmically in the blue. After a five-year absence, again I was in Hawaii and aboard the Jaladuta II, the Hare Krsna movement’s fifty-three-foot teakwood ketch. 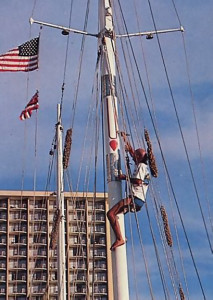 In 1980, Narahari Swami had convinced the ship’s owner to donate his handsome ketch to the Hare Krsna movement so that devotees could travel from island to island and give people spiritual food, spiritual song, and spiritual knowledge, along with sailing, swimming, and snorkeling. On this particular Wednesday afternoon in early May 1986, Narahari Swami (now the ship’s skipper), four devotee-crewmembers, and I were en route to Kona Bay on the “Big Island” for a Saturday cruise program, just like the one we had held on Oahu on the previous Saturday. Bracing myself against the six foot swells that rocked our ship, and looking toward the horizon—which was unrelieved by any sign of land or life—I thought about Columbus, Magellan, and other early European explorers who had sailed for months without sighting land. 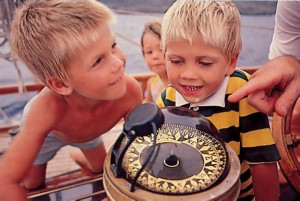 Some of those explorers were seeking a western route to India. Their aim was to fill their ships with India’s treasures spices, gems, gold, and silver—and heroically return home with a vast fortune. Although explorers eventually reached India, it wasn’t until twenty years ago that India’s treasure reached other lands. That treasure was carried not by an explorer but by a humble emissary of Lord Krsna, His Divine Grace A.C. Bhaktivedanta Swami Prabhupada, the founder-acarya of the International Society for Krishna Consciousness. 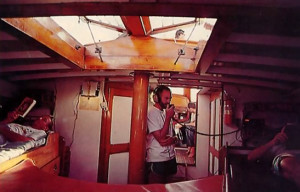 Narahari Swami keeps in touch with ISKCON ‘sfarm community on Hawaii by radio, as crew members read from Prabhupada’s books during the hot hours of the day.

Srila Prabhupada’s aim was not to gain fortune or fame, but to give the process of self-realization. His courage was not in facing unchartered seas but in offering spirituality to the hordes of materialists in the West. And it was in leaving his homeland, at the age of seventy for the first time, and in venturing to a land where no one knew him and where he had no support. On September 17, 1965, the steamship Jaladuta arrived in Boston Harbor. The lone mendicant aboard, who described himself as an “insignificant beggar,” would, in the next twelve years, establish a worldwide spiritual movement that would astonish historians and scholars. 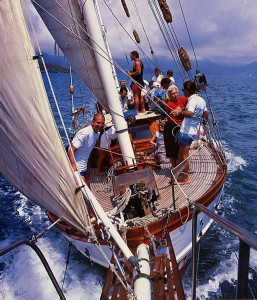 Before he passed on in 1977, Srila Prabhupada encouraged some of his disciples to use a boat to propagate Krsna consciousness. In a letter, he wrote, “Your idea of having a large boat traveling from city to city is very encouraging. So if you have got the means, then go ahead and do it. Krsna conscious men aboard ship and chanting Hare Krsna is a very nice program, and the coastal people may take advantage of this transcendental vibration and be benefited.” 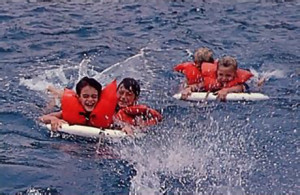 Children get a ride on life preservers just before a picnic lunch, served on deck.

In Hawaii a large percentage of those “coastal people” are the five million tourists who annually throng these sundrenched shores. Many an unsuspecting, lei-graced visitor has looked out from the beach at Waikiki to see the Jaladuta II’s colorful mainsail with its three-foot high letters proclaiming: “Hare Krsna.” 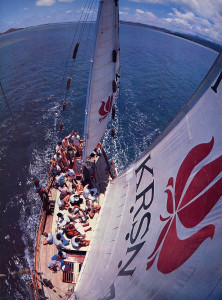 The natural beauty of Hawaii and the excitement of sailing, combined with good company, good food, singing, and swimming, make for an ideal Krsna conscious outing.

Those transcendental words have also caught the attention of journalists. Dharmayug, a Times of India publication and the largest circulated weekly in India, published color pictures of the Jaladuta 2 in its center spread, along with an article in which the author, Lallan Prasada-vyas, wrote, “I believe that of all the spiritual movements based on Indian spiritualism, the Hare Krsna movement is the strongest and is working for the welfare of mankind…. I will always remember the evening I spent on the Hare Krsna boat, and on returning to India I sometimes remember the Jaladuta II. For me this boat was a means of experiencing great happiness.”

Not long after the Dharmayug article appeared, the Honolulu Advertiser published a full-page article by staff writer Jay Hartwell. “What you find after sailing and talking to the Hare Krsnas,” Mr. Hartwell wrote, “is that they are a polite, friendly a group that lives and works for God….” 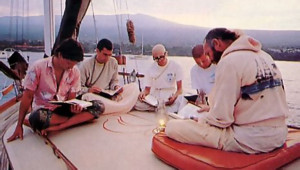 Narahari Swami and the crew always read from the spiritual classic Srimad-Bhagavatam before a day of sailing.

Mr. Hartwell also quoted Narahari Swami: “We use the best of material energy as much as possible for Krishna. By having something materially nice, we can get a full cross section of people. But if we’re sailing out in some dirty little barge, who’s going to come and associate with us? If it’s a nice opulent boat, then nice people will come.” 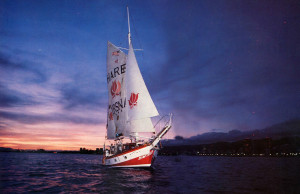 By now the verdant mountains of Hawaii island were on the horizon, rising out of the deep blue water. I was leaning against the main mast, squinting in the brilliant sunshine and delighted by four sleek dolphins playing near the bow. Srila Prabhupada’s voice sang over the ship’s speakers, and Charlie, the first mate, sat in the shade of the mainsail repairing a halyard.

Charlie had joined the Jaladuta II’s crew five years ago, after seeing an article about the ship in Back to Godhead magazine. Charlie, forty-three, is a licensed captain with twenty years’ boating experience. He has also had fifteen years of association with members of the Hare Krsna movement. He is devoted to the Jaladuta II. 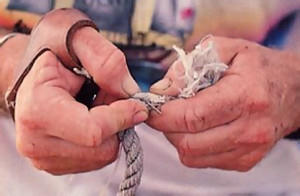 Charlie, the first mate, whips a halyard with his sea-worn and sea-worthy hands

Both Narahari Swami and Charlie told me about Markandeya, a young Czechoslovakian whose experience on the Jaladuta II had convinced him to become a full-time devotee. When Srila Prabhupada came to America for the first time, he brought with him (on the original Jaladuta) a trunk containing copies of the first three volumes of the Srimad-Bhagavatam, volumes he had written and published in India. During the next twelve years he translated and published twenty-six more volumes of this classic scripture. For one year Markandeya lived and served on the Jaladuta II, during which time he read the entire set of Srimad-Bhagavatams, as well as a few of Srila Prabhupada’s other books. That period of reading, service, and association with devotees had convinced him to become an initiated devotee himself.

To Srila Prabhupada, the publishing, widespread distribution, and assimilation of the timeless Krsna conscious texts form the basis of Krsna consciousness. It is also the goal and sustenance of the boating project. Srila Prabhupada wrote: “I am very pleased that you are serious to embark on such a boating project, even though it will be a huge effort and expenditure to become successful. But nevermind that; nothing is too much big if Krsna desires it. So if you are very determined that your boating idea will succeed, then Krsna will give you all encouragement and facility…. As for your maintenance, you have our books and literatures to distribute widely everywhere you go, so you should never lack for maintaining the boat.”

And in another letter: “I once had a dream like this: that we would have a moving temple on the water, going from town to town. So you are making that dream come true. Thank you very much. Do it nicely and maybe I will come and join you also.”

When the Jaladuta II docked in Kona Harbor, forty men, women, and children clambered aboard for a full day of sailing, kirtana, as much prasadam as they could eat, and a long swim in the clear waters. That evening one of the guests said to me, “When the Jaladuta II begins sailing from port to port distributing Srila Prabhupada’s books and offering cruises to the public, I want to come too. I’d like to help make Srila Prabhupada and his ship famous throughout Hawaii.”