Back to Godhead > ~Featured~ > The Intruder

One pleasant spring night Krsna and Balarama entered the forest of Vrndavana to enjoy the company of the gopis, Their cowherd girlfriends. Suddenly, there appeared … The Intruder 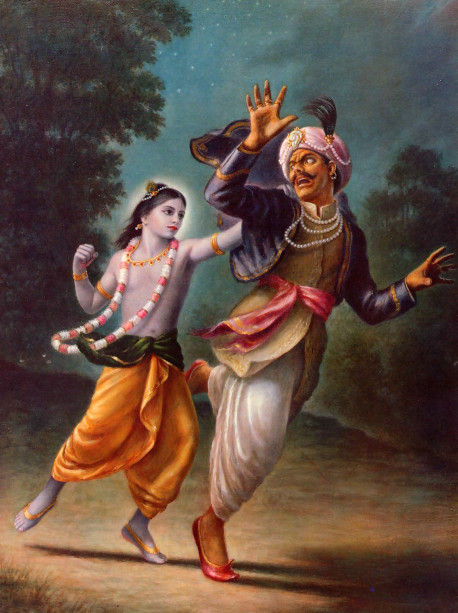 In Vrndavana, Lord Krsna’s eternal abode, all the elements of nature combine to enhance the pleasure of the Lord’s pastimes. When Krsna descended five thousand years ago, His transcendental home, Vrndavana, descended with Him. His early pastimes, therefore, are like windows on the spiritual world. As a king travels in state, Krsna travels surrounded by loving devotees and the transcendental atmosphere of Vrndavana, displaying His eternal pastimes for all to see.

In one of these pastimes, the deliverance of Sankhacuda, Lord Krsna encountered a powerful, envious materialist who mistook God’s property to be his own. A mistake Krsna corrected in a most dramatic and instructive way.

One pleasant spring night Krsna and Balarama entered the forest of Vrndavana to enjoy the company of the gopis, Their cowherd girlfriends. The moon shone brightly amid glittering stars. Refreshing, fragrant breezes carried the aroma of mallika flowers. The songs of the peacocks, cakoras, and cuckoos filled the air. And bees, intoxicated by the fragrance of the flowers, flew here and there.

These descriptions from the Srimad-Bhagavatam reveal the variety and beauty of the spiritual world. Those who deny the existence of the spiritual world think that artists and poets have created it in their imaginations, drawing on the beautiful natural settings of the phenomenal world. The opulences of Lord Krsna’s abode, however, are transcendental reality. The first verse of Srimad-Bhagavatam states that the Lord’s abode “is forever free from the illusory representations of the material world.” That isn’t to say the kingdom of God is devoid of variety, form, and qualities. Whatever enjoyments the mundane world affords are but shadows of the untainted, unending, variegated bliss of the eternal abode of Krsna.

When Krsna entered the Vrndavana forest, the birds, the trees, the flowering plants, the animals—everything combined to produce the most pleasant atmosphere for His enjoyment. Among all the living entities in the Vrndavana forest on that spring evening, none were more concerned about Krsna’s pleasure than the gopis. As they entered the forest they were not thinking of their own enjoyment. They were thinking only of how they could assist Krsna in His pastimes. This is spiritual love, the love of the soul for the Supreme Personality of Godhead.

People sometimes confuse spiritual love with sexual love. But the exchange of pleasure between Krsna and the gopis is not sexual. In the material world, exploitation haunts the relationships between men and women. Thus, a man loves a woman because he has something to gain from her. If she stops fulfilling his needs, separation follows, and the so-called love turns to hate. In the spiritual world, however, love is pure and is exchanged between the soul and God. As long as we remain riveted to mundane consciousness, pure spiritual love will elude us.

Spiritual love is unconditional. That is, the lover and beloved are concerned only with the other’s pleasure; they seek no gain. We too can love purely, but only when through devotional service we reawaken our love for God.

Originally we are all pure lovers of Krsna, but we have turned away. Desperately we are searching for another lover to replace Him. But we never find that perfect lover; no one can replace God.

By loving and serving Krsna, the gopis were fully satisfied. They did not want anyone but Krsna, nor did they expect anything from Krsna. Krsna, therefore, was supremely satisfied with their devotion. People generally pray to Krsna for the fulfillment of material desires, but the gopis were such elevated transcendentalists that they prayed only to be engaged in Krsna’s service.

Since the loving affairs of Krsna and the gopis are far beyond the ken of materialistic persons, and since only the pure in heart are allowed to enter the transcendental realm of Vrndavana and participate in Krsna’s pastimes, we can readily understand the audacity of Sankhacuda, who in the very presence of Krsna and Balarama began abducting some of the gopis.

Sankhacuda was a demoniac person of great opulence, renowned for the valuable conchshell-shaped jewel adorning his forehead. Intoxicated by his own wealth, he thought Krsna was an ordinary boy enjoying the company of young girls. He thought he, not Krsna, should be enjoying these beautiful girls.

Sankhacuda demonstrates the mentality of all rebellious souls. Choosing not to assist Krsna in His pastimes, the envious living entity tries to compete with Krsna and enjoy the opulence of Vrndavana for himself. But envy has no place in Vrndavana. Thus, driven by the desire to enjoy Krsna’s position, we fall to the material world.

Here, deluded by the illusory material energy, we try to enjoy God’s property for ourselves. Krsna created this world; He owns it. As long as we fail to recognize that, we must remain here, trying in vain to perfectly and happily enjoy that which is not ours.

Sankhacuda thought he could enjoy without recognizing Krsna’s position. But when he tried to take Krsna’s place by stealing His gopis, he demonstrated the foolishness of such a mentality.

When Krsna noticed Sankhacuda leading the gopis away, He immediately began chasing him. The gopis cried out to Krsna and Balarama, who picked up big logs as They pursued. Gradually Sankhacuda began to realize that the two brothers were far more powerful than he had calculated. He left the gopis and began to flee for his life. Now Sankhacuda realized he was no match for God, who easily grabbed the demon, struck him in the head with His fist, and killed him.

Krsna’s killing of demons like Sankhacuda is sometimes criticized as unbefitting God. The Srimad-Bhagavatam, however, explains that because Krsna is absolute, His killing demons is as transcendental as His loving the gopis; both derive eternal benefit. Krsna loves everyone. By killing Sankhacuda, He liberated him from material existence and guaranteed his entrance into the spiritual sky. Such is the fortune of one who is touched by the hand of the Supreme Lord. Thus Krsna extended His unlimited mercy to the envious Sankhacuda.

Krsna also extends His mercy to us. By hearing this divine pastime from the ancient Vedic literature, we can know that we are trapped in this material world with our Sankhacuda-like mentalities. We can also know that, like Sankhacuda, we are being touched by Krsna—not by His absolute and merciful fist, but by His absolute and equally merciful form of divya-lila, or transcendental pastime. Indeed, the Srimad-Bhagavatam extols hearing the transcendental pastimes of Krsna as one of the most potent means of purification and spiritual realization. Continued and faithful hearing about the Lord from a pure devotee of the Lord will destroy our Sankhacuda-like mentality and awaken our original mentality as humble, nonenvious, ecstatic servitors of the Supreme Personality of Godhead.