Back to Godhead > ISKCON > News > For God or Guinness

For God or Guinness

For God or Guinness 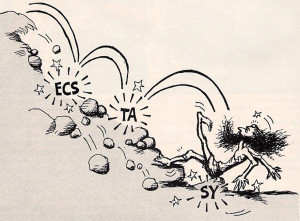 Ignoring nausea, blisters, and bruises, Asrita Furman valiantly pushed on. For ten and a half hours he fought to maintain philosophical detachment: “I am not my body; I am soul.”

Repeatedly he plunged forward to meet the rough pavement in yet another somersault. And then another and another and another … eight thousand two hundred ninety in all. In this painful and peculiar fashion he covered more than twelve miles, following the reverse route of Paul Revere’s famous ride.

What inspired Furman to such acrobatics? He claims the feat was an offering to his guru.

A disciple of an Indian guru for the past fifteen years, Furman was motivated by his guru’s teaching that spiritual advancement is obtained by pushing the body to its limits. Eight thousand two hundred ninety consecutive somersaults on the side of the road seemed a suitable challenge.

Is this a valid process of self-realization? According to the Vedic science of self-realization, to advance spiritually means to understand the spiritual reality behind the material illusion of this world. We must understand not only our own spiritual nature but also the spiritual nature of that supreme being who is the origin of all existence. That supreme being is Krsna, the Supreme Personality of Godhead, and we are His eternal servants. This is the essence of spiritual realization.

To enlighten us with spiritual knowledge, Lord Krsna teaches us, both through the scriptures and through His representative, the bona fide guru. Just as the rails of a train track must run parallel, the guru and the scripture must agree. When they do, we are guided safely and accurately toward spiritual perfection. This accord between guru and scripture legitimizes a process for spiritual advancement.

Mr. Furman did follow his guru, but since somersaulting is not authorized in the scripture as a legitimate spiritual practice, Furman’s spiritual advancement is dubious. Nowhere do the scriptures indicate that the Supreme Personality of Godhead rewards sweaty gymnastics with spiritual enlightenment. Indeed, Bhagavad-gita (17.18-19) specifically warns against Such whimsical austerities:

There’s nothing spiritual about enduring pain. People everywhere are tolerating miseries much greater than the bruises of Asrita Furman, and their forbearance does not necessarily bring them transcendental knowledge. We must receive transcendental knowledge by studying the revealed scriptures under the guidance of a bona fide spiritual master. Otherwise we will be cheated.

In the Bhagavad-gita (17.14-16) Lord Krsna describes austerities that are essential for spiritual growth and are pleasing to Him:

Austerity of the body consists in worship of the Supreme Lord, the brahmanas, the spiritual master, and superiors like the father and mother, and in cleanliness, simplicity, celibacy, and nonviolence. Austerity of the speech consists in speaking words that are truthful, beneficial, and not agitating to others, and also in regularly reciting Vedic literature. And satisfaction, simplicity, gravity, self-control, and purification of one’s existence are austerities of the mind.

Had Furman’s guru recommended these Vedic austerities to his devoted disciple, then how much more valuable his determination would have been. This is not the first undertaking Furman has accepted for the pleasure of his guru. Previously he walked twenty-four miles with a milk bottle on his head, held a fifty hour hand-clapping marathon, and trekked eleven and a half miles up the side of Mount Fuji—on a pogo stick!

Although Furman’s exploits have not helped him gain the favor of God, they have brought him considerable attention in the media and earned him a place in the Guinness Book of World Records, thus increasing the prevalent misunderstanding about Vedic teachings and the nature and goal of spiritual life. 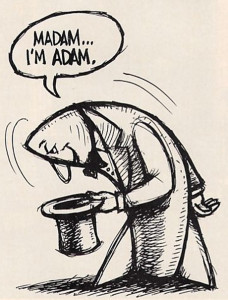 This year the Reagan administration finally scrapped its observance of the unratified SALT II arms limitation treaty, while Congress allocated fresh billions for hatching a so-called “third generation “of nuclear weapons. These moves have prompted widespread fear of a steep acceleration in the arms race.

Brace yourself: we’re in for it again. Here they come—more and more of ’em, and getting more scary all the time. Nuclear weapons. What to do?

Nobody likes ’em. Everybody hates ’em. Yet somehow we just can’t get rid of ’em. They’re more tenacious than cockroaches. And considerably more dangerous. Like those irradiated arthropods escaped from the lab in a B-grade science fiction movie, they just keep on multiplying—and evolving as they do, into more and more nightmarish and diabolical forms.

But our real-life horror show with nuclear weapons is even weirder than the movie. Weirder, because we ourselves are churning out those weapons. We—who hate them, who abhor and abominate them, whose most fervent prayer is to get rid of them—we make them. And keep on making them. And on top of that, making these weapons is what you’d have to call a rational activity. Lots of hard thinking, planning, ingenuity, cunning, goes into it. We really apply ourselves.

We make them. So it’s not like the SF films—nature gone amok and out of control. It’s us!

It’s weird. Because when you picture those guys working, so calm and serious in their crisp white coats in crisp air conditioned labs, scowling over print-outs and punching in data, exchanging information in terse bursts of jargon and diddling with some device so big and complex that maybe no one person understands all of it—seeing that, it doesn’t look like anyone’s out of control or insane.

But then, why can’t we keep from inflicting this ever-increasing terror upon ourselves? We’re running out of control for sure, even though all that rationality sometimes makes it hard for some of us to see it clearly. But when we finally face up to it, we see that this rationality actually makes it worse. What we’ve got here is something very, very scary: the rational organization of insanity.

Think about that, and you’ll realize that it means our problem lies really deep. There is some insanity, some corruption, some evil rooted so deeply, so profoundly within us, that it can co-opt reason itself and enlist it in its service.

What is this hidden evil at the heart of the great nuclear weapons death race? What hidden diabolic energy forces us, as if against our will, to inflict upon ourselves those increasingly powerful engines of megadeath?

As it turns out, a seaman named Bill Bailey stumbled upon the answer to this question quite by accident, without even realizing it. He was shipboard in the Pacific in 1945 when word of the Hiroshima bomb reached him, and by a wonderful misunderstanding he put his finger right on the real problem, at the very dawn of the atomic age. Bill Bailey’s pregnant error is recorded for posterity in Studs Terkel’s The Good War, an oral history of World War II. This is what our seaman—salty language and all—says:

We’re on our way to Okinawa, when we got word that the atom bomb dropped. I thought it was Adam, A-D-A-M. Somebody dropped an Adam bomb. What kinda bomb is that? They said it wiped out a city. I said, “This son of a bitch of an Adam, who the hell is he?”

Well, I know who he is—he’s our common ancestor, the primordial man of Eden, who transgressed the bounds set by God and brought us to grief. That Adam, the emblem of original sin. The maker of the Adam bomb.

Now, the old primer rhyme tells us, “In Adam’s Fall/We sinned all.” I accept that. But the idea of original sin depicts us as guilty for something we didn’t do. It is our remote forebear’s crime—not ours—but still we suffer for it, inheriting his fault like a genetic defect. That would be simply unjust, and I don’t buy the idea.

I say that when the Bible talks about what Adam did, it’s talking about what we ourselves did. We were there “in the beginning” ourselves, because, being God’s offspring and made in His image, we are not material beings but spiritual beings. So we’re eternal. That’s the very nature of spirit: it never comes into being; it never goes out of being. That’s why in the Bhagavad-gita the soul is described not only as ajah, “unborn,” and nityah, “eternal,” but also as puranah, the oldest.

This means that all of us are primordial persons. When the Bible talks about Adam, then, it’s actually talking about us. As a matter of fact, “adam” is simple Hebrew for “man.” We can all step forward and introduce ourselves with that old palindrome: “Madam, I’m Adam.”

So we’re to blame. And what did we do? What’s our sin at the root of it all?

We decided that we didn’t want to serve God but wanted to become God ourselves. In other words, we became envious of God and wanted to take His place. That is our fall. And we are still fallen to this day because we still have that attitude.

You see, as the offspring of God, made in His image, we inherit the qualities of God—like Him, we are eternal, full of knowledge and bliss. But we possess those divine qualities in minute quantity. For we are not God. God is great and One without a second. We, His creatures, are tiny and many without number. The creator is independent, and we are dependent. The dependent many are by constitution eternal servants of the independent One, and as long as we act as servants, we remain in the kingdom of God and enjoy full divine life with Him.

But some among the innumerable, dependent souls don’t like that subordination. We thought—and still think—it better to be God. We rebellious souls are sent into the material world, a place created just for us to play out our fantasies. We cannot be God—the post is filled—but here we can forget Him and work on our own little God projects.

That’s why this world is so crazy and hellish. It’s chock-full of people trying to make it as God—driven to be the enjoyer and the controller; mad to be the lord of all they survey. And with such a desire naturally comes envy and hate, as we plunge into an unresting struggle to own and control the resources of matter, to seize what others have and annex it to ourselves, and to defend what we’ve snatched against the encroachment of others.

But all this springs from the original sinful will—the desire to become the Lord. All beings born into the material world, Krsna explains in Bhagavad-gita (7.27), show the taint of this original sin in the form of desire and hate. That desire and hate breaks out everywhere, but the original desire is, Why can’t I be God? And the original hate, Why should Krsna be God?

But we can change our will at any time. By fully acknowledging that God is the proprietor of everything, the friend of everyone, and the enjoyer of all, we can end this stupid and vicious struggle to dominate and control each other and to possess this earth for ourselves. Now we have dedicated some of our best brains to furthering this struggle; and bestowed upon suffering humanity the ripe fruit of our original sin—the Adam bomb.

Krsna predicts in Bhagavad-gita (16.9) that persons who are envious of Him “engage in horrible works meant to destroy the world.” It sure sounds like He’s talking about us and our Adam bomb.

And it looks like we had better do something about it soon.