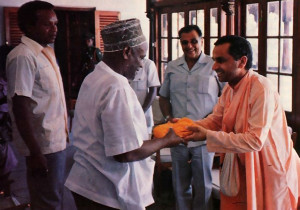 Zanzibar President Wakil receives a copy of Srila Prabhupada’s Bhagavad-gita As It Is from Srila Navayogendra Swami.

Zanzibar—On a recent tour of eastern and central Africa, Srila Navayogendra Swami met here with President Wakil. The president accepted copies of Bhagavad-gita As It Is and Teachings of Lord Caitanya.

The meeting, scheduled to last fifteen minutes, lasted one hour. Navayogendra Swami and President Wakil discussed the philosophy and practices of the Krsna consciousness movement and the movement’s activities in Africa. The meeting with the president was broadcast on national television.

Navayogendra Swami had been visiting Dar es Salaam, Tanzania, when an Indian gentleman, inspired by Navayogendra Swami’s lectures, had chartered a plane to fly the swami and a group of Hindus to Zanzibar to meet President Wakil. When the group arrived at the Zanzibar airport, members of Parliament, national television correspondents, and leading citizens welcomed Navayogendra Swami.

The distribution site resembled a festival ground, as the devotees gave out free books, chanted Hare Krsna and explained the philosophy of Krsna consciousness with the help of many exhibits.

An announcer for the leading Nigerian radio station told his audience, “One might think this was the second coming of Jesus, because just as he fed the masses, so the Hare Krsnas were feeding thousands of people.”

Book on ISKCON Released in England 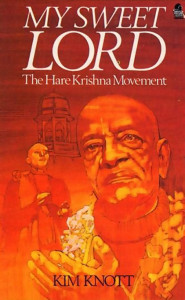 London—Dr. Kim Knott, a research fellow at the University of Leeds, recently released a study of the Hare Krsna movement titled My Sweet Lord. Dr. Knott was commissioned by London University’s Kings College to write the book as part of a series of texts on new religious movements.

Dr. Knott’s writing is scholarly and objective, and her work provides a comprehensive introduction to the Hare Krsna movement. It also refutes some common misconceptions. She writes,

Looking beneath the surface of the movement has shown us three things. Hare Krsna is not a new religious group, except in the most superficial sense; it is not stuck in the cultural and social groove of the 1960s; nor is it just one of many contemporary cults…. None of these stereotypes do justice to the Hare Krsna devotees, their philosophy, and their way of life. Their religion is firmly rooted in Indian tradition. It is dynamic. It has characteristics which distinguish it from other contemporary religious groups and which qualify it to stand independently as a bona fide religion.

In researching ISKCON, Dr. Knott frequently visited the Society’s centers in London and nearby Letchmore Heath. Her research convinced her of the validity and importance of the Hare Krsna movement and led her to take up its spiritual practices. She is now Kausalya-devi dasi, an initiated disciple of Srila Bhagavan dasa Goswami.