A mother-to-be ponders karma, reincarnation,
and devotional service to Krsna. 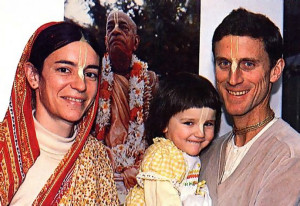 When, one crystal-clear morning in January of 1982, my husband Yadubara and I first learned that we were parents-to-be, we had many of the usual questions first-time parents have. But since we were devotees of Krsna, the answers to our questions were based not on scientific and popular theories but on the profound and realized wisdom of the Bhagavad-gita and Srimad-Bhagavatam.

The Srimad-Bhagavatam describes how the soul takes shelter in a particle of semen during sexual intercourse. The soul thus enters a particular mother’s womb, where a particular type of body begins to develop around it.

“What activities?” you ask. “What good or bad activities can an embryo perform?” But the soul now within the womb and developing a new body did not so recently begin his mortal sojourn. Rather, he has been in innumerable wombs and has been incarcerated within innumerable bodies, lifetime after lifetime. Each new birth the soul takes is the consequence of activities performed in previous lives.

This is why one child is born into good circumstances and another is not. Medical scientists may explain, for example, the cause of various birth defects. But they can’t explain what causes one child to be stricken by a defect while another is not.

Who was our unborn child? What had been his or her previous incarnations? We didn’t know. But we could understand, on the basis of the Srimad-Bhagavatam, that whoever the child was—for better or worse—that was our karma. Just as it is the child’s karma to be born into a particular family, so it is the parents’ karma to have that particular child born to them.

Yet, my husband and I knew we weren’t tossing helplessly in the ocean of karma. In the ninth chapter of the Gita, Lord Krsna explains, “Whatever you do, whatever you eat, whatever you offer or give away, and whatever austerities you perform—do that, O son of Kunti, as an offering to Me. In this way you will be freed from karma and its auspicious and inauspicious results.” And He says in the eighteenth chapter, “In all activities just depend upon Me and work always under My protection. . . . I shall deliver you from all sinful reactions.”

Although the Lord will protect His devotees from the effects of karma, He never wants them to sit idly or to act foolishly, waiting for Him to save them. Srila Prabhupada, my spiritual master and the founder and spiritual master of the International Society for Krishna Consciousness, has stated, “The highest goal of human life is to work hard under the guidance of the Lord and become completely dependent on Him … to work with valor, but at the same time depend completely on the Lord.”

Srila Prabhupada instructed all his followers to purify their lives by chanting the holy names of the Lord (Hare Krsna, Hare Krsna, Krsna Krsna, Hare Hare/ Hare Rama, Hare Rama, Rama Rama, Hare Hare) and to follow four regulative principles: no meat-eating, no taking of intoxicants, no gambling, and no illicit sex. He said that by following this process—which has been recommended for this age by great spiritual authorities and the revealed scriptures—we would come under the Lord’s protection. He would personally free us from karma.

As parents we would thus also be free for freeing our child from karma, so that he or she would never again have to enter a mother’s womb. “One who cannot deliver his dependents from the path of repeated birth and death should not become a father or a mother” (Bhag. 5.5.18). When a person has transcended all karma, both good and bad, he does not have to take another material birth in yet another material body; rather, he develops a spiritual body in the kingdom of God.

We knew that the best we could do was to offer our child what Srila Prabhupada had offered us: devotional service to the Supreme Personality of Godhead. Krsna Himself declares this as the proper path: “One can understand Me as I am, as the Supreme Personality of Godhead, only by devotional service. And when one is in full consciousness of Me by such devotion, he can enter into the kingdom of God” (Bg. 18.55).

These were some of our thoughts. As my pregnancy developed, I continued my service to Krsna, taking special care to get enough exercise, enough rest, and the right foods. Late that September, a healthy seven-and-a-quarter-pound girl was born to us. We named her Amrta dasi, meaning “servant of Lord Krsna, the immortal person.” If, one day, she fully realizes the import of her name, we will feel ourselves successful parents.