Betrayed by the Basic Four

Four? Three? Whatever the count,
a balanced diet should nourish not only
the body but the spirit as well. 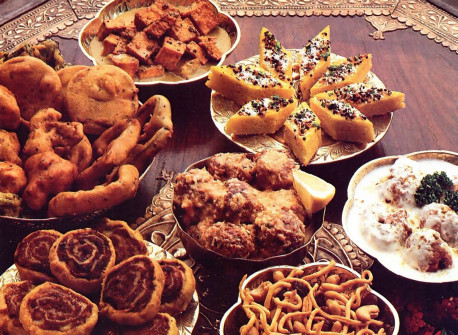 I remember how we learn about it in elementary school. Mrs. Pile had a colorful, authoritative chart divided into four sections—the Basic Four. Twenty-two young, innocent faces gazed at the pictures. In section one: milk, cheeses, ice cream, and pudding. In section two: a hamburger, sausages, a fried chicken leg, a boiled egg, a hot dog, and some shrimp. In section three: carrots, a slice of watermelon, broccoli, a baked potato, half an orange, and some strawberries. And in section four: lasagna, breads, tortillas, waffles, spaghetti, rice, and corn muffins.

On the far right of the chart was a smaller section of pictures: an apple pie, cookies, marmalades, and catsup. These were foods to complement, but not replace, the Basic Four. “You should eat from the four food groups every day,” Mrs. Pile told us.

Srila Prabhupada, the founder and spiritual master of the International Society for Krishna Consciousness, unequivocally toppled the Four. “Eating meat, fish, and eggs,” he said, “is sinful.” In fact, “Those who kill animals and give them unnecessary pain—as people do in slaughterhouses—will be killed in a similar way in the next life and in many lives to come. . . .There are many rascals who now violate their own religious principles. Judeo-Christian scriptures clearly say, ‘Thou shalt not kill.’ Nonetheless, even the heads of religion, giving all kinds of excuses, indulge in killing animals. And still they try to pass as saintly persons. This mockery and hypocrisy in human society bring about unlimited calamities.”

Well, so much for section two. But that doesn’t mean Srila Prabhupada simply left us with the “Basic Three.” No. He taught us about krsna-prasadam, vegetarian food offered to Krsna with love and devotion.

Krsna-prasadam may look like traditional Indian vegetarian food: it doesn’t contain meat, fish, or eggs, and it often follows traditional Indian recipes. But it qualitatively surpasses all mundane food (even the finest vegetarian cuisine) because it nourishes not only the body but also the spirit.

Prasadam purifies us. It vanquishes sinful reactions and immunizes us to the contamination of materialism. Just as a vaccine can protect us against an epidemic, so krsna-prasadam protects us from the illusion and suffering of materialistic life. Thus, one who eats prasadam readily progresses in self-realization.

A devotee of Lord Krsna—educated by his spiritual master, the scriptures, and saintly teachers—knows that all food ultimately comes from God. It cannot be produced by any man-made arrangement. And a devotee wants to please God by offering the earth’s bounty—which is God’s own bounty—back to Him.

Skeptics have no entrance into this divine exchange. Perhaps they place their faith in the Basic Four. The devotee, however, remains in a compact of love with Lord Krsna and eats only His prasadam.

1. Wash the dal and soak it for at least four hours. Then drain it. put it in a blender or food processor with the yogurt and water, and blend until smooth. Let it stand at least 6 hours in a warm place, covered.

2. Find a pot into which you can fit a round cake pan 8 inches across. You’ll need some sort of ring to keep the cake pan off the bottom. Its center should have an opening wide enough to allow steam to reach the bottom of the pan. Put about 2 inches of water in the pot and bring to a boil.

3. Grind the fresh chilies into a paste with a little water and add to the batter. Then add the ginger, turmeric, salt, lemon juice, melted ghee, and baking powder. Mix well. Grease the cake pan with a little butter or ghee and pour in the batter. Cover the pot tightly and steam the dokla for 20 to 25 minutes or until springy to the touch.

4. To prepare the topping, heat 2 tablespoons of ghee in a small pan and fry the mustard seeds, the sesame seeds, and a pinch of asafetida. When the mustard seeds finish popping, spread these seasonings over the top of the dokla and then sprinkle over it the grated coconut and coriander leaves.

5. When cool, cut into 3-inch squares and carefully remove from the pan. Offer to Krsna.

1. Make paneer as described in BACK TO GODHEAD. Vol. 18. No. 6, and reserve 2 cups of the whey. Gather the paneer in a cheesecloth and rinse it under cold water for a few seconds. Now flatten the cheese in the cheesecloth to a thickness of about 1 inch and weigh it down evenly so the result will be a flat slab of firm cheese. Do this on top of the sink so the liquid has a place to drain. Leave it for 30 minutes.
2. Remove the cheesecloth and cut the cheese into 1-inch cubes, or into rectangles or diamonds 2 inches long. Deep-fry them in ghee or vegetable oil. It should take about 4 to 5 minutes to brown the cubes lightly. Drain.

3. Start a masala by heating a tablespoon of ghee or vegetable oil in a small saucepan. Stir-fry the cumin seeds, cinnamon sticks, and cloves. After about 30 seconds, follow with the powdered spices and stir-try for a few seconds more. Now pour the 2 cups of whey into the masala, add the salt, and bring to a boil; then remove from the flame. Put the fried cheese cubes into this liquid masala and allow them to soak for at least 20 minutes. Just before offering to Krsna, reheat the paneer masala, then drain off the liquid.

Mix together the chick-pea flour, spices, salt, and cold water to make a smooth, thick paste. Heat the ghee or oil over a medium flame. Beat the paste a few seconds. Then use a spatula to force a spoonful of paste through a large-holed colander into the ghee. Now run the spatula over the bottom of the colander to scrape any remaining batter back into the bowl. Force another spoonful of paste through the holes into the ghee. Repeat until the surface of the ghee is covered with noodles. If the paste is too thin and falls in elongated drops instead of noodles, thicken it with more chickpea flour. Turn and fry the noodles until only slightly brown. They will continue to darken after you remove them from the ghee. Drain before offering to Krsna.

Note: You can also use a cloth icing bag with a small hole to make spirals or loops. If these noodles are too large, you can break them into pieces after they drain.

You can make practically any vegetable into pakoras. Whatever vegetable you use, cut the pieces about the same size so that they cook at the same speed.

1. Sift the chick-pea flour into a large mixing howl and add the spices, salt, and baking powder. Slowly add the cold water and whisk until you have a smooth batter thick enough to coat the vegetables.

2. Cut all the vegetables before heating the ghee. You may need to parboil large cauliflower pieces. Use other vegetables raw.

3. Heat the ghee or vegetable oil over a medium-high flame. The ghee is hot enough when a drop of hatter dropped into it rises immediately to the surface and sizzles. Now put a handful of cut vegetables into the hatter and coat them well. Put in one kind of vegetable at a time-you’re going to fry each kind separately. Take the coated vegetables out of the batter one by one and put them quickly into the hot ghee until the surface of the ghee is covered. Fry for several minutes, until the pakoras are golden brown and crisp: then remove them and let them drain. Fry all the pakoras in this way, never putting in more than one layer at a time. When drained, offer to Krsna.