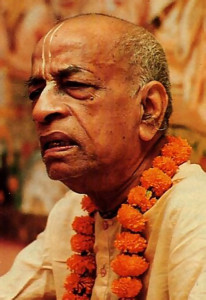 This is the continuation of a conversation between His Divine Grace A.C. Bhaktivedanta Swami Prabhupada and a guest—Dr. Christian Hauser, a psychiatrist—which took place in Stockholm in September 1973.

Srila Prabhupada: I am prescribing, “Chant Hare Krsna.” If you say, “Hare Krsna,” immediately the relief begins. And if you say, “No, no, I cannot chant this Hare Krsna mantra—I don’t believe in it,” what can be done? That will prove to be a great misfortune.

Dr. Hauser: Yes. But isn’t there something else beyond just the chanting? I mean …

Srila Prabhupada: That is the beginning. It is like an ocean. Anandambudhi: an ocean of blissfulness. So first of all, come to the shore—touch the water. It is like the Pacific Ocean, with all its vastness. But come to the shore and touch the water. Then gradually you’ll understand. If you remain aloof—”No, I shall not touch it”—then how can you understand what the Pacific Ocean is?

Now, how does this ocean of blissfulness go on increasing? Ceto-darpana marjanam: the more you chant the Lord’s holy names, the more you cleanse your heart.

We all have got these unclean ideas, these dirty illusions—”I am white,” “I am black,” “I am French,” “I am Chinese”—covering our heart. Fundamentally, our illusion is, “I am this body.”

But by chanting the Lord’s names, we cleanse away our illusion and come to the reality: “I am a spirit soul, part and parcel of the Supreme Spirit. Now let me serve Him.”

So our diseased condition in this world is due to our unclean heart. In fact, disease means uncleanliness. Is it not?

Srila Prabhupada: Yes. So our material disease—our being in this material world to begin with—is due to our unclean heart. Therefore to cure this disease, ceto-darpana-marjanam: we have to cleanse our heart. And this is the process: chant Hare Krsna; let the Lord’s holy names cleanse our heart.

Dr. Hauser: When did this movement start in the Western hemisphere?

Srila Prabhupada: My spiritual master, Srila Bhaktisiddhanta Sarasvati Thakura, asked me to revive this traditional Vedic culture in the Western world. It is not actually a question of “starting.” This is the world’s traditional, original culture.

Dr. Hauser: For some people, it will be very difficult accepting this kind of thing as authoritative.

Srila Prabhupada: Why? At every moment, everyone is accepting something or other as authoritative—whether some scientific theory or some news report. And yet generally, whatever thing we are accepting was produced by some man’s imperfect senses and imperfect mind—so that thing is imperfect.

Srila Prabhupada: But if we go to the all-perfect Supreme Personality of Godhead, then we get something perfect, something really authoritative. Take this traditional Vedic culture. It comes from the Vedic literature of Vyasadeva, the Lord’s literary incarnation. You just test for yourself. For instance, several thousand years ago, the Bhagavata Purana foretold Lord Buddha’s birth—the place, the family, the date—exactly. Perfect authoritativeness.

So this chanting of the Lord’s names—we are not concocting some idea. In the Vedic literature the Lord recommends this; this is authoritative.

But instead you may want to accept some other prescription for relief—something produced by some man’s imperfect senses and mind. But that thing must be imperfect, because it is from someone imperfect.

Srila Prabhupada: And yet, despite all this imperfection, still this man will put the thing forward as if it were perfect. So he is cheating.

That is going on. Recently a big professor, a Nobel Prize winner, went to Los Angeles to tout his hook on chemical evolution. His remedy for our darkness is that life begins from a certain four chemicals. And he has the effrontery to give lectures.

So one of my disciples who has a doctorate in chemistry asked this professor, “If I give you these four chemicals, will you be able to produce life?” The professor replied, “That I cannot say.”

Srila Prabhupada: So we don’t go to cheaters to get relief. We go to the Supreme Lord, and we continuously chant His holy names.