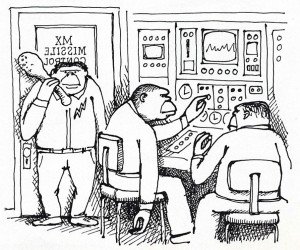 Eating, sleeping, mating, and defending. These propensities are common to the animal, including the human animal. Especially for humans, fulfilling these propensities creates a constant challenge: how to eat well, how to sleep comfortably, how to make more suitable arrangements for sex, and, most perplexing, how to defend against an enemy. After all, without adequate defense, the other basics could well be blown to smithereens.

Let’s be realistic. Rabbits often close their eyes when cornered by a predator, thinking to make it disappear. And everyone has heard about the proverbial ostrich hiding its head in the sand. But such attitudes are not intelligent. History shows no instance where huge stockpiles of arms have not eventually been used. The reality is upon us, and ignoring it won’t change things.

At present, there are over 345 commercial nuclear power reactors in operation in 26 countries, and 52 countries have nuclear research facilities. Of course, all of these countries do not possess enrichment facilities to turn uranium into bomb-grade material right away, but there are already enough nuclear bombs between the United States and Russia to deliver the equivalent of 1,000 tons of TNT to every man, woman, and child on earth. This may explain the resistance against the MX missile: people are beginning to say, “Enough’s enough.”

The latest country to join the nuclear powers is India (in 1974), and Pakistan is expected to be next. Since Indian independence, India has been portrayed as a nonaligned, fast-developing third-world country. While those outside India have often shown more interest in her spiritual culture, India’s leaders have been running after Western technology, showing an ambivalence toward their own heritage. Examining the shifting emphasis of India’s culture from spiritual to material gives us a clue to how modern Western civilization and its imitators are producing a new enemy, which is neither black nor white, communist nor capitalist, but a subhuman creature.

In February 1936, Srila Prabhupada, the founder and spiritual master of the International Society for Krishna Consciousness, delivered a speech to some prominent citizens of Bombay. The following is an excerpt:

It is said that we are passing through the age of darkness, the Kali-yuga [the age of quarrel, hypocrisy, and strife]. What is this darkness? It cannot be due to backwardness in material knowledge, because we now have more material knowledge than formerly. If not we ourselves, our neighbors at any rate have plenty of it. Therefore, we must conclude that the darkness of the present age is not due to a lack of material advancement, but that we have lost the clue to our spiritual advancement, which is the prime necessity of human life, the criterion of the highest type of human civilization. Throwing of bombs from airplanes is no advancement of civilization from the primitive, uncivilized practice of dropping big stones on enemies’ heads from the tops of hills. . . . Nor does the development of a sense of pampered selfishness prove anything more than intellectual animalism. True human civilization is very different from all these states, and therefore in the Katha Upanisad [1.3.14] there is the emphatic call: “Please wake up and try to understand the boon that you now have in this human form of life. The path of spiritual realization is difficult: it’s as sharp as a razor’s edge. That is the opinion of transcendental scholars.”

The development of a sense of pampered selfishness refers to using the human form of life and its distinctive intelligence merely to satisfy animal propensities, without developing a higher sense of spiritual existence. Intellectually, the human being can develop the concept of God realization and self-realization, whereas an animal can grasp neither. However, when such superior brain power is dedicated to decorating human life with animalism, it may be termed “intellectual animalism.”

Our subhuman creature, the intellectual animal, uses his brain to perfect eating, sleeping, mating, and defending. But how much can it eat? An ordinary elephant eats more than one hundred pounds daily. How much can it sleep? An ordinary bear can hibernate for months on end. How often can it mate? Pigeons have sex thirty times daily.

But, as far as fighting goes, the intellectual animal has far outdone any other species. It cannot defend itself naturally, using teeth and nails against a stronger animal, yet it has perfected the art of killing its own kind with giant weapons far beyond the imagination of those present during Srila Prabhupada’s 1936 address. During that speech Srila Prabhupada went on to say:

Thus, while others were yet in the womb of historical oblivion, the sages of India had developed a different kind of civilization, which enabled them to know themselves. . . . All of us are spiritual entities. We cannot have perfect happiness, which is our birthright, however much we meddle with the affairs of mundane things. Perfect happiness can be ours only when we are restored to our natural state of spiritual existence. This is the distinctive message of our ancient Indian civilization, this is the distinctive message of the Bhagavad-gita.

Our spiritual awakening begins when we become inquisitive about the meaning of life, the reason for death and suffering, the identity of God, and our relation with Him. In a BACK TO GODHEAD magazine article, Srila Prabhupada dramatized the human being’s natural inquisitiveness beyond the animal’s problems of food, sleep, sex, and defense into the real problems of life:

Why have I been put into this miserable condition? Is there any remedy for it? Is there any perpetual, eternal life? I do not want to die. I want to live very happily and peacefully. Is there a chance of this? What is that method? What is that science? When these inquiries are there and steps are taken to answer these questions, that is human civilization; otherwise it is animal civilization. 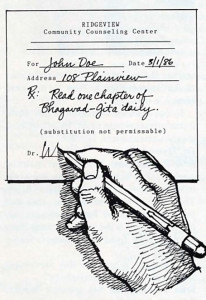 A billboard along the freeway outside Atlanta reads:

Life? Is this life? Alcohol, depression, and stress?

Yes, for many it is. For many, the stupor of alcohol, the numbness of chronic depression, and the pressures of unrelieved anxiety have reduced life to little more than a burden to be grimly tolerated.

That’s why we have places like the Ridgeview Community Counseling Center. Such places do a lot of good. Unfortunately, the good they do is inadequate. They don’t reach the root of psychological problems.

Every bona fide scripture of the world informs us that the root of all distress is forgetfulness of God. We have forgotten our eternal link with God as His servants. As soon as we forget that, all our troubles begin. The Vedic literature in particular explains how the rebellious souls enter and remain entrapped within this world of birth, death, and suffering. We mistake ourselves to be products of this material world. This is may a (illusion). Foolishly identifying with the physical body (black/ white, male/female, and so on), we fall prey to a world of pains, stresses, disappointments, frustrations, anxieties, and heartbreaks.

Spiritual life is, by contrast, blissful, eternal, and joyful. Why? One reason is that spiritual life—if it is indeed genuine—is based on an enlightened conception of the self. For example, a friend of mine recently lost his wife. He became depressed. He had many relatives and friends to console him, but his depression did not abate. As a student of the Bhagavad-gita, I could see he had no clear knowledge of the eternal nature of the self. But as soon as he tasted one morsel of truth from Bhagavad-gita—“We are spiritual; we exist after death”—he felt comforted.

Persons working at the Ridgeview Community Counseling Center and other such centers need transcendental knowledge. We are all meant to help each other. That’s natural. And naturally we feel compassion when we see others suffering. But to truly help we must have truth to help with. Help and compassion fall short if they do not comprehend the real, eternal nature of the self.

BACK TO GODHEAD writers treat karma, however, with the understanding derived from the ancient Vedic literature that all unchanging laws are creations of the supreme lawmaker, God. This perspective on universal laws is shared by religious traditions outside the direct Vedic line, and, in fact, by any person with a little common sense. Whether we are dealing with a state created by man or with the universal state, to assert that laws have no maker is foolish.

But one of the difficulties with referring to the laws of karma to explain newsworthy events is that such an explanation often sounds like we’re saying “Serves you right, sinners.” Even though BACK TO GODHEAD writers are careful, it’s easy for readers, especially those already averse to theism, to jump to the conclusion that someone is attempting to ram piety down their throats with an iron rod of sanctimony.

How do we resolve these difficulties? BACK TO GODHEAD writers are committed to presenting the truth, just as it is presented in the Vedic literature. But as for sanctimony, the serves-you-right tone, we take great pains to avoid it. We try to diagnose an event or news item scientifically, presenting things in the light of Vedic knowledge. As a doctor’s first concern is that his patients remain healthy, so members of the Krsna consciousness movement inform people of the laws of karma to help them overcome future unpleasant reactions.

Members of the Hare Krsna movement, including contributors to BACK TO GODHEAD, also avoid bickering with members of other religious faiths over the details of God’s laws. We try to see the common ground—and there is plenty of it—shared by the world’s religions, whose common goal is, after all, to serve and glorify the Supreme Lord. There are disagreements, of course. We assert, for example, that the Biblical injunction “Thou shalt not kill” refers to the unnecessary killing of any living being, including animals. But even in thus disagreeing with the prevailing viewpoint of modern Christians, we are accepting Jesus Christ’s instructions. Similarly, we find no difficulty in accepting many of the principles enunciated and practiced by followers of Islam and other religious traditions.

Only on an individual basis can we fully resolve the difficulties that arise in trying to explain the laws of karma. Human society is always roughly divided into two camps: those who acknowledge the supreme lawmaker, and those who don’t. Those who don’t will always regard references to sin and karma as sanctimony. Those who do acknowledge God will, as long as they are still in the earlier stages of spiritual development, tend to squabble with members of other faiths. It is ultimately up to individuals (and groups of individuals) to come to the stage of spiritual maturity. Then they can powerfully communicate their understanding to others without forcing it upon them.