Back to Godhead > Devotees > Preaching > Vegetarianism > The Karma Free Diet

More than just vegeterianism: a way of eating that’s a form of meditation and worship. 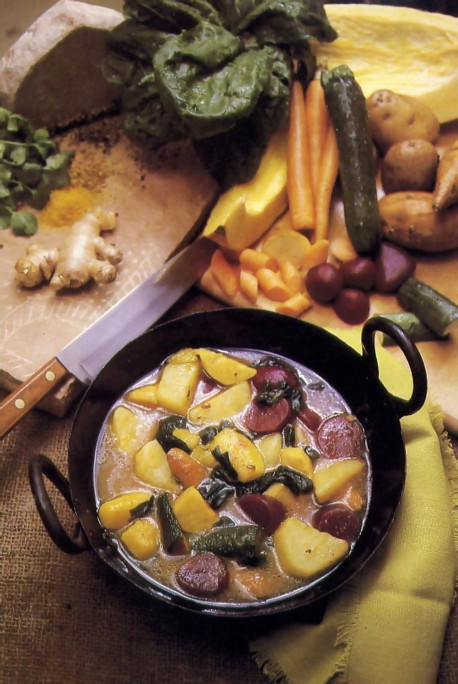 Answer: The Sanskrit word karma means “action” or, more specifically, any material action that gives us a material reaction and thus binds us to the material world. So a karma-free diet is one that produces no material reaction; it’s a sinless diet

Question: You think people can sin just by eating?

Answer: Oh yes, definitely. Sinning means breaking nature’s laws (which are the laws of God). The cow eats grass and fodder, the tiger eats flesh, the rosebush gets nourishment from water and the minerals in the earth. These lower forms of life don’t sin; they follow nature’s laws automatically. But in human life we can transgress, bad karma, give us bad reactions—high blood pressure, high cholesterol in the blood, obesity, diabetes, cancer, heart attacks, psychological troubles, and so on. According to nature’s laws, food for humans should be made from milk products, vegetables, grains, and fruits—not meat, fish or eggs.

Question: So vegetarians are sinless in their eating ?

Answer: No, not necessarily. All living things have a soul. So, whether you kill a cow or pick a cauliflower, you’re killing. No doubt animals are higher on the evolutionary scale than plants, but killing is still killing, and it’s sinful.

Question: I know a lot of people who would argue with you about animals and plants having a soul.

Answer: They may argue, but how do they know? What is the symptom of the soul’s presence?

Answer: Yes, symptom. We can’t see the soul directly, because it’s a spiritual particle and a very small one at that. But we can understand that it’s present by its symptom—consciousness. Animals are conscious. They feel fear, pain, affection, and hunger, just as we do. And scientists have shown that plants are also conscious. They respond to sunlight, warmth, music ; they grow around obstacles. So by these symptoms we can understand that the soul is present within animals, people, and plants, but it’s covered in varying degrees.

Answer: Right. But vegetarians have a better chance for making spiritual advancement.

Question: Why is that?

Answer: Because eating meat makes one merciless and hardhearted. It’s much easier for a vegeterian to understand spiritual concepts and follow spiritual practices.

Question: But I don’t exactly understand. You said that both plants and animals have a soul and that killing them is sinful—bad karma. So what’s the idea of a karma-free diet? You’re also killing the vegetables you eat.

Answer: Yes we are. By nature’s laws, one living entity is food for another. Just to exist you must kill. But a devotee collects the fruits, grains, and other foods that Krsna likes, cooks them in a particular way, and offers them to krsna with love and devotion. When Krsna accepts such an offering, He also accepts whatever sinful reactions were incured in preparing the food. Then there’s no karmic reaction when we eat it. On the contrary, we become purified by eating prasadam, food that’s been offered to Lord Krsna.

Srila Prabhupada explains this karma-free principle with an analogy. He says that when a soldier kills under the command of a superior officer, he’s not to be judged a criminal. But if a soldier kills on his own account, then he’s certainly a criminal and subject to trial and punishment. Similarly, when we follow Krsna’s desire and eat what’s intended for us by the laws of nature, there’s no reaction. But if we eat for our own sense enjoyment, forgetting Krsna, we’re in for a reaction.

Question: That makes it clear, but what did you mean when you said “cooked in a particular way”?

Answer: Cooking in Krsna consciousness is a type of meditation and worship. Srila Prabhupada taught us to maintain a high standard of cleanliness in the kitchen, from the glisten on the bottom of the pans to the floor beneath our feet. Before entering the kitchen we make sure we’re clean in body and in mind, and as we cook we think of pleasing Krsna—so there’s no frivolous or unnecessary talking. And we never taste the dishes before they’re offered: Krsna is the first to enjoy them.

Question: What happens to the soul in a vegetable—a cauliflower, say—that’s been offered to Krsna?

Answer: I asked Srila Prabhupada that same question some years ago. He told me, “The soul gets liberation.” I was too stunned and shy to pursue the point, but another devotee asked, “What kind of liberation does the soul get?” And Srila Prabhupada said, “It gets a human body, and from that point it can make further advancement in spiritual life.”

Question: What if I don’t believe anything you’ve told me?

Answer: That’s your prerogative. We don’t mind if you’re skeptical, because we don’t want blind followers. We want you to question and deliberate on the philosophy of Krsna consciousness as far as your reason and intelligence allow. But you shouldn’t blindly reject this knowledge because it’s foreign to you, because you didn’t grow up with it. All we ask is that you simply try to hear with an open mind. I was also skeptical, even more than you. I argued with the devotees for a year before I finally admitted that what thev were saying made perfect sense—much more sense than what I was trying to say to them 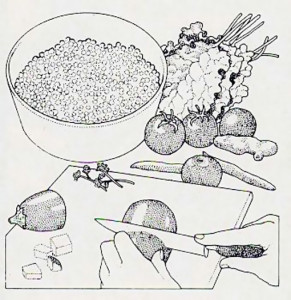 This preparation is somewhat akin to vegetable soup. It is a classic favorite, yet it is simple to prepare and easy to digest. The ingredients are mentioned in sacred Vaisnava scriptures more than five hundred years old.

1. Combine all the vegetable ingredients in a 4-quart saucepan, bring to a boil over high flame, reduce the flame to medium low, cover and simmer until the vegetables are tender. Remove the pan from the flame.

2. Heat the ghee or vegetable oil in a small saucepan over a medium-high flame, drop in the cumin seeds, black mustard seeds, black cumin seeds, freshly ground black pepper, and cassia leaf, and fry until the mustard seeds sputter and crackle. Pour the seasoning into the boiled vegetable, cover, and allow the seasonings to soak into the broth. In a few minutes, stir in the lemon juice and offer to Krsna

1 pound fresh spinach, washed, drained, stemmed, and chopped (If you’re using frozen spinach, thaw at room temperature, press the spinach between your palms to remove all excess water, and chop.)

1. Heat the ghee or vegetable oil in a heavy 4- or 5-quart saucepan (nonstick cookware is ideal) over medium to medium-high flame for 1 minute. Drop in the ginger root. seeded chilies, cumin seeds, and mustard seeds, and fry for about 30 to 45 seconds or until the cumin seeds turn golden brown. Add the curry leaves and asafetida powder, and then immediately add the eggplant cubes. Stir-fry for about 8 to 10 minutes, or until the ghee or oil is absorbed into the eggplant and the cubes are brown.

2. Stir in the tomatoes, spinach, turmeric, salt, and half the fresh herbs. Then cook for about 5 minutes. Fold in the drained, cooked chickpeas. Now partially cover, reduce the flame to medium-low, and simmer, stirring occasionally for 30 minutes, or until the eggplant is buttersoft. If you want a drier vegetable, remove the lid, raise the flame to high, and quickly cook off the excess liquid. If you wish a pureed eggplant-and-tomato vegetable, cook over medium flame, stirring frequently to avoid scorching, until the spinach, eggplant, and tomatoes have merged into a thick velvety sauce. Before offering to Krsna, mix in the remaining fresh herbs, lemon juice, and sweetener.