On Improving the Material World. 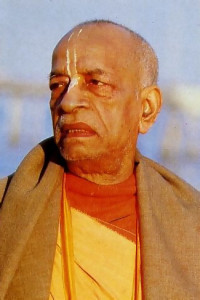 The following conversation between His Divine Grace A.C. Bhaktivedanta Swami Prabhupada and some of his disciples took place in July 1975 on an early-morning walk in Los Angeles.

Devotee: Srila Prabhupada, what is the qualification for going to the spiritual world?

Devotee: Yesterday in your lecture you gave the example of Queen Kunti, who prayed that calamities would happen to her again and again so that she would realize what a terrible place this material world is and remember Krsna.

Srila Prabhupada: Yes, this is intelligence. When one concludes, “This material world is worthless”—that is real knowledge. As long as one thinks, “No, it is not always bad; sometimes it is very good”—that is ignorance.

Devotee: I often meet people who say that without the bad, the good wouldn’t be as good.

Srila Prabhupada: That is the logic of the criminal who is dunked into water as a punishment. The authorities catch him and put him down into the water, and when he is nearly suffocated they raise him a little and he says, “Ohhh, this is so nice!” But then he is immediately pushed down into the water again.

So the good and bad of this material world are like that. People are put into the water and suffocated, and when they are taken out a little they say, “Ahhhh, this world is very nice.” The rascals do not know that the next moment they are going to nearly drown. So unless we remember how suffocating the material world is, we are not fit for going back to Godhead. We must completely detest this world. If we keep just a little attachment for it—”Oh, sometimes it is very good here”—we have to remain.

Devotee: Is it true that Krsna will take everything away from a devotee who still has some material attachment?

Srila Prabhupada: That is Krsna’s special favor. That is not an ordinary favor. When Krsna sees that His devotee is maintaining some material attachment. He says, “This fool wants Me, but at the same time he wants to stay in the material world. So let Me take away all his material possessions so that he will want only Me.” This was done to me; I have practical experience. I did not want to take sannyasa [the renounced order of life]; I thought I would do business. But Krsna forced me to take sannyasa, and my business was dismantled.

Devotee: Srila Prabhupada, does Krsna engage the material nature to beat us and kick us so that we will surrender to Him?

For example, now the scientists are trying to make some improvement in agricultural production. But how long will this improvement last? If there is no rainfall how will all their “improvements” help? The rainfall is not in their hands; that is adhidaivika: it depends on the demigods. If the demigods want, they can completely stop the rain. So what is all this nonsensical “improvement”?

Krsna says this material world is a place that is meant for misery. So how will you improve it? “Yes,” the scientists say, “we are advancing. In the future people will live eternally; nobody will die.” This is folly, illusion. People who are trying to do something that is impossible are fools, mudhas. Their mentality is like that of the ass. The master sits on the back of the ass and hangs a bunch of grass in front of him. The ass thinks, “I’ll get it,” and walks on and on. “If I just walk a little forward,” he thinks, “I shall get the grass.” He has no brain to see that he’ll never get the grass—that as he is moving the grass is also moving.

So, the scientists are just like the ass. They do not see how foolish their “improvements” are. For example, now we have manufactured so many airplanes. It was thought, “Within two hours we shall be able to go many hundreds of miles. This is very nice.” But there are so many dangers in an airplane. Now there is the problem of how to protect us from accidents. So what is the improvement? The improvement is that now two hundred men at a time can die all together. This is the improvement. What a horrible civilization!

Devotee: But someone may say, “You say this is a horrible civilization. So why don’t you withdraw from it? Why don’t you live by yourselves on a farm somewhere instead of in the cities, using the same cars and airplanes that we use?”